Fear Street director Leigh Janiak clearly knows her horror movies. The co-writer and director of the Netflix horror flicks recently sat down for a chat with /Film about all things Fear Street, including the movies that directly influenced each chapter in the Netflix trilogy. While some of the picks seem obvious, like 1996’s Wes Craven classic, Scream, she also referenced auteur Terrence Malick and the 1980s kids classic, The Goonies.

Here’s where you can stream or rent of the films that inspired the Fear Street trilogy, going back in time in the order of the movies, from 1994, to 1978 and finally, to ye olde 1666.

Where to watch: Available to stream on AMC+; available to rent on Amazon, Google Play, Youtube, and Vudu for $2.99

Scream is the most obvious reference point for Fear Street Part One: 1994, to the point that Janiak said in out interview that they “wrote a million love letters” to the 1996 classic. Fear Street Part One draws its tone from Scream, which was one of the first slashers to engage in a meta-analysis of genre tropes. There’s also the infamous opening sequence where star Drew Barrymore answers a mysterious phone call and is killed before the title screen rolls. Fear Street does a direct homage, starting Part One with Stranger Things star Maya Hawke answering a phone call before meeting a similarly bloody fate. Scream kicked off an entire franchise of self-aware, sometimes very funny sequels following the killer(s) and his many, many victims, but it’s the original movie that Fear Street draws from most heavily.

I Know What You Did Last Summer

Where to watch: Streaming on HBO Max; available to rent on Amazon and Vudu for $2.99

Kevin Williamson, the guy who wrote Scream, also wrote a fun little slasher called I Know What You Did Last Summer. The movie follows four teens after they accidentally run over a man on their way home from a party and leave him for dead. Unfortunately for them, he comes for revenge wearing a nasty hook where his hand used to be. I Know What You Did Last Summer is a much more straightforward slasher than Scream, but it still maintains a strong ’90s vibe and features a number of needle-drops from the era. The sequences in Fear Street Part 1 where the teens are doing research to figure out what exactly is going on are very reminiscent of Jennifer Love Hewitt‘s character Julie digging through newspaper articles, and there are moments in both films that feel tonally in tune with one another.

Where to watch: Streaming on Paramount+; available to rent on Amazon/Google Play/YouTube/Vudu for $2.99

The final movie Janiak referenced for Fear Street Part One is none other than director Robert Rodriguez‘s 1998 Invasion of the Body Snatchers riff, The Faculty.Williamson also wrote this high-school set gorefest, because apparently he wrote every teen horror flick in the ’90s. The Faculty stars Josh Hartnett and Elijah Wood as students in a small town high school who begin to suspect that their teachers are actually possessed by homicidal alien slugs. While it doesn’t share much with Fear Street plot-wise, The Faculty is a clear inspiration for both snarky character dialogue and using mundane objects to create the nastiest kills possible. Also, it just plain rules.

Where to watch: Streaming on AMC+, Shudder, and the Roku Channel

Pretty much every horror movie that’s come out since 1978 has referenced John Carpenter‘s Halloween in some way, mainly because it’s an absolute masterpiece. Halloween follows babysitter Laurie Strode (Jamie Lee Curtis) as she tries to survive the vicious attacks of the slasher Michael Myers, who wears a bleached out William Shatner mask and carries a very big knife. The direct parallels between Fear Street and Halloween occur in Part One, where a babysitting sequence feels oddly reminiscent of Laurie’s friend Annie babysitting and not paying much attention. The more obscure parallels come in Part Two, mostly in the way shots of the killer are framed. 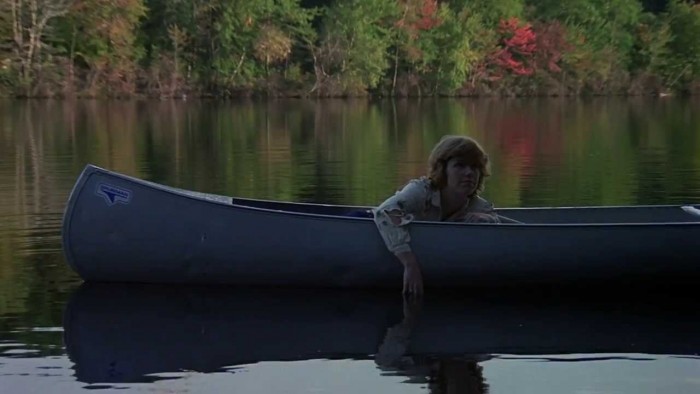 Where to watch: Streaming on STARZ; available to rent on Amazon/Google Play/YouTube/Vudu for $2.99

It’s pretty easy to see the similarities between Fear Street Part Two and the 1980 slasher classic, Friday the 13th. Both are summer camp slashers set in the late ’70s that feature bunches of people at a summer camp getting killed. Friday the 13th, directed by Sean S. Cunningham and written by Victor Miller, follows the counselors at Camp Crystal Lake as they try to protect themselves from a mysterious slasher (and no, it’s not Jason – he wouldn’t show up until the sequel). There’s plenty to homage here, including the counselors having sex when they really shouldn’t and shots of people running around enjoying themselves, unaware of the real danger. There are some fun similarities between Fear Street‘s Camp Nightwing and Camp Crystal Lake just waiting for astute viewers to catch.

A Nightmare on Elm Street

Where to watch: Streaming on HBO Max; available to rent on Amazon and Vudu for $2.99

A Nightmare on Elm Street, written and directed by the late, great Wes Craven, features a very different kind of slasher from Fear Street‘s witchy killers. The film birthed the nightmare stalker Freddy Krueger (Robert Englund), a supernatural slasher who can kill kids in their dreams. What Janiak was able to take away from A Nightmare on Elm Street, however, was its perfect depiction of a “final girl.” A Nightmare on Elm Street‘s Nancy (Heather Langenkamp) is a smart, capable young woman reminiscent of Halloween‘s Laurie, but she’s really her own person. There’s quite a bit of Nancy in Fear Street‘s Cindy (Emily Rudd), even if they don’t get to share that final girl status.

Where to watch: Streaming on HBO Max; available to rent on Amazon/Google Play/YouTube/Vudu for $3.99

The Goonies isn’t a slasher, or a horror movie at all, but it gave Janiak plenty of inspiration for Fear Street Part Two. Directed by Richard Donner from a screenplay by Chris Columbus, The Goonies is an adventure-comedy about a group of kids who discover a treasure map and try to find the gold in order to save their homes from foreclosure. They get lost, make some scary enemies, and have to count on one another to survive. A large chunk of The Goonies takes place underground, much like Fear Street Part Two. Janiak herself even referred to the underground sequences in Part Two as being her version of “the horror Goonies.”

Writer/director Robert Eggers made his feature film debut with The Witch, about a family in 1630s New England torn apart by the forces of witchcraft. Thomasin (Anya Taylor Joy) is the eldest child and must care for her younger siblings while also tending to the family farm. This is mirrored in Fear Street Part Three‘s Sarah (Kiana Madeira), who must care for her younger brother Henry (Benjamin Flores Jr.) as well as tend to the family’s pig and their meager crops. Sarah’s family is ostracized from the community because the people suspect her of witchcraft, while Thomasin’s family is forced to live completely separate from the village due to their hardcore religious beliefs. There are some clear parallels between Thomasin and Sarah, who both end up engaged with the forces of evil in order to survive.

Where to watch: Streaming on Peacock; available to rent Google Play and Amazon for $3.99

In The Village, written and directed by M. Night Shyamalan, an isolated 19th century-style village in the woods is beset upon by wicked creatures in the night known only as “Those We Don’t Speak Of.” The villagers grow increasingly suspicious of one another as the creatures lash out after one of the villagers makes an unapproved trek in the woods at night. After one particularly awful incident, only the young blind woman Ivy (Bryce Dallas Howard) is willing to traverse the woods to get medical supplies, come what may. The Village is absolutely gorgeous to look at, with moments of bright color that break through the browns and tans of the forest and the village. Fear Street Part Three takes a similar tack, only using splashes of bright color when absolutely necessary. The two also share the same sense of paranoia and the otherworldly, though Fear Street‘s period setting is, well, more authentic.

Where to watch: Available to rent on Amazon/Google Play/YouTube/Vudu for $3.99

If you somehow managed to dodge seeing this one in your high school literature class, now’s your chance to rectify that. The Crucible, based on the classic play by Arthur Miller, is a terrifying tragedy about how rumors can be deadly. Based loosely on the historical events of the Salem witch trials, The Crucible follows a group of girls in Salem who accuse various villagers of being witches in order to achieve their own selfish goals. Several people are put on trial, and three are wrongly hanged. Fear Street‘s Sarah goes through a similar witch hunt, the town whipping itself into a frenzy over her alleged crimes.

Where to watch: Available to rent on Google Play and YouTube for $2.99

It might seem surprising that Janiak drew reference for her slasher movie from a 2005 Terrence Malick romantic drama about a man who falls in love with Pocahontas, but the secret is in the love story. In The New World, British explorer Captain Smith (Colin Farrell) and Indigenous chieftan’s daughter Pocahontas (Q’orianka Kilcher) fall in love, but they are both ostracized from their communities for it. In Fear Street Part Three, Sarah falls in love with pastor’s daughter Hannah Miller (Olivia Scott Welch), and their romance is the stuff of Puritan shame. Plus, there are just lots of lovely shots in Part Three that feel borrowed from the Malick playbook.

The post Here are the Movies That Inspired ‘Fear Street’ Director Leigh Janiak – And Where You Can Watch Them appeared first on /Film.

/Film – ‘Slash Film: Here are the Movies That Inspired ‘Fear Street’ Director Leigh Janiak – And Where You Can Watch Them’
Author: Danielle Ryan
Go to Source
July 17, 2021

‘Slash Film: What is the Worst MCU Phase 1 Movie?’

All Three ‘Fear Street’ Soundtracks Getting Vinyl Release With Cover Art Inspired by the Original Books!