Little Tommy Doyle tried to warn us all back in ’78. “You can’t kill the boogeyman.” Did Laurie listen? Nope. But what’re you gonna do? Trapping Michael Myers in your basement and setting the whole damn building on fire is as good an attempt to end his reign of terror as any, but if you’ve seen the trailer for Halloween Kills you know that Tommy Doyle’s words ring true.

Total Film has put the serial slasher on their cover and it gives us our best look yet at the damage done the night he came home…again. 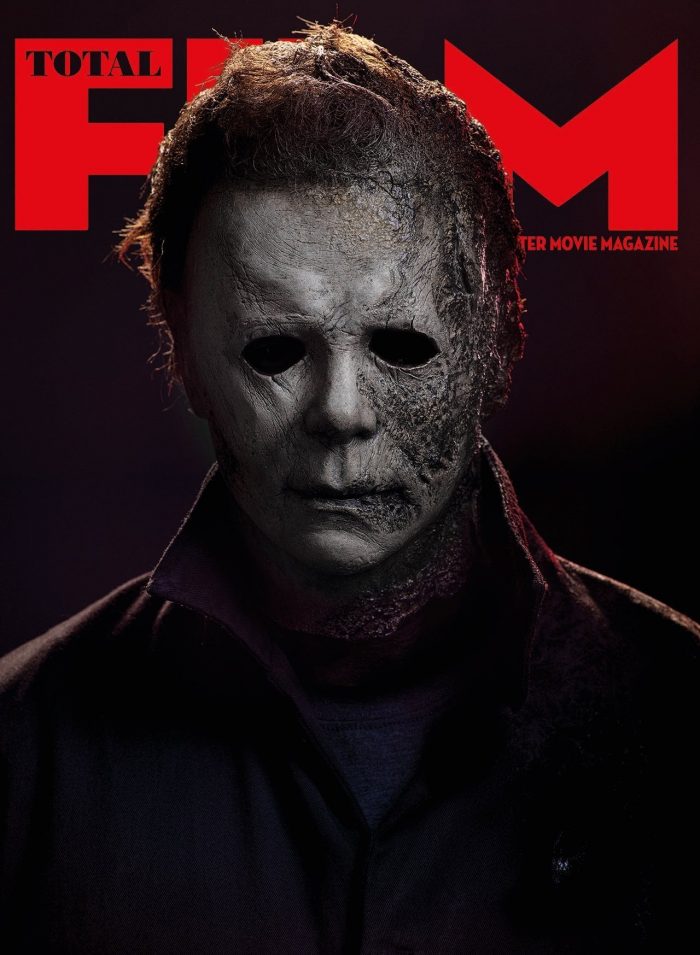 Halloween Kills is only three months away so, naturally, we won’t get much more information about the movie, and who would want to know more at this point? We’re so close, and the trailer showed enough to hold anybody over. But now’s as good a time as ever to take a deeper dive into the visage of Michael Myers and what this new burnt mask represents.

Strap in, things are about to get nerdy here. Horror super fans already know the broad strokes, but if you don’t obsessively follow the Halloween series, this might seem confusing.

The Long, Convoluted History of The Shape

Halloween (2018) made the executive decision to ignore everything after the first Halloween. All sequels are out the window in terms of film canon. Laurie is no longer Michael’s long-lost sister, just the babysitter that happened to be there when he broke out of the mental institution and drove back to Haddonfield.

That was the right move on a number of levels, but the primary reason is this: Michael Myers’ backstory just got too complicated. There’s a reason why The Shape in the first movie is still the most effective horror icon. It’s because Michael was built from the ground up to be a void where the characters (and the audience) dump their fears. He’s a blank slate, almost literally. His bone-white emotionless mask wasn’t picked on accident.

Dr. Loomis repeatedly talked about how Myers wasn’t a boy, he was pure evil with nothing behind his eyes. He’s meant to be the boogeyman. He’s like a shark on land. He has no vendetta, no reason for doing what he’s doing. He’s death in human form. He doesn’t play favorites. He doesn’t have a plan. He shows no emotion. He’s random bad luck.

Halloween 2 introduced the whole “he’s after Laurie because she’s his sister” angle that stuck throughout the rest of the series, which gave The Shape a motive and instantly undercut what John Carpenter did in the original film.

Now, I get a lot of enjoyment from the Halloween series, but the more they progressed the more they felt like they had to explain why Michael Myers was the way he was, to the point where they introduced a whole backstory that established that Michael was cursed by a Druid cult from birth.

Yes, this is real.

That was so bad that they threw away all that stuff once before this new reboot. The Thorn Cult stuff was gone in H20, Jamie Lee Curtis was back and they tried to explain her absence in the series by telling us she faked her death. That stuck for all of one sequel where she died in the opening moments, but the less said about Halloween: Resurrection the better.

The original sin, however, was giving The Shape a motive for his attacks in the first movie, which is what David Gordon Green and his crew knew going into the 2018 reboot/legacy sequel.

Myers is back to being that agent of chaos, the blank face of death is back to stalking the streets of Haddonfield. He doesn’t pursue Laurie Strode because he has no motive. She’s the one going after him this time.

The Shape is supernatural, yes, but in a grounded way now. Well, as grounded as a person who turns a cop’s head into a Jack-O-Lantern can be, but you get my point. He’s not the result of a cult ritual. He’s just pure evil walking on two legs. He will kill a child or a grandmother. He isn’t discerning, as death isn’t discerning.

Would Michael have burned up if the Haddonfield Fire Department hadn’t shown up? Yeah, very likely. He is the boogeyman, but working through a real human body. He breathes, he bleeds, he shows his injuries (many of the scars we glimpse in Halloween 2018 are from his injuries in the very first film) and I wouldn’t be surprised if the damage seen on the mask on this Total Film cover doesn’t show up underneath in some form.

The mask is, as I previously theorized, a representation of the horror the character represents. In 1978 it was a blank slate, youthful and line-less. In 2018 it was noticeably older and meaner. Now it’s charred, Laurie’s mark on him. Could that mean a connection between the two now?

I kind of doubt it. It would shock me if Green and his creative team fall into the same trap that the series did before, the very reason why they decided to throw out the whole convoluted mess of sequels, reboots and remakes in the first place.

As an aside, I did notice the cheeky Season of the Witch Silver Shamrock masks being on prominent display in the trailer for Halloween Kills. Clearly the filmmakers all well-versed in the history of this franchise and will nod to stuff that has been officially jettisoned, but I doubt any of that will translate to the most important facet of this series and that’s Michael Myers himself.

The post Here’s a Better Look at Michael Myers’ Mask in ‘Halloween Kills’ and What It Might Represent appeared first on /Film.

/Film – ‘Slash Film: Here’s a Better Look at Michael Myers’ Mask in ‘Halloween Kills’ and What It Might Represent’
Author: Eric Vespe
Go to Source
July 20, 2021

DEMONIC Official Trailer: It Won’t Stop Coming For You