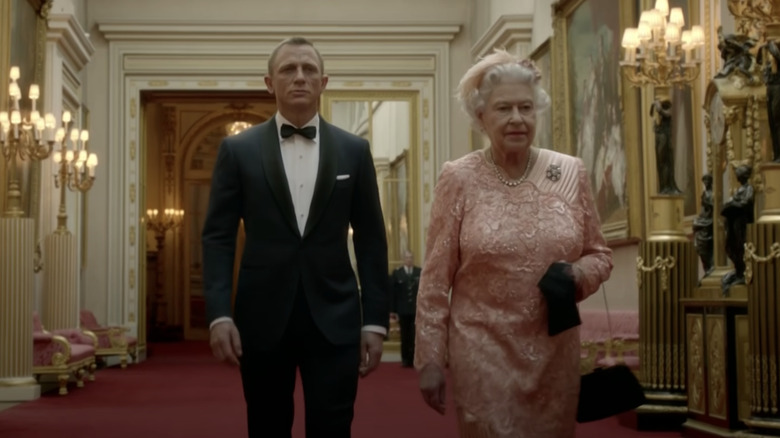 The death of Queen Elizabeth II has dominated global news this month, and it’s something that has even filtered down to movie discussions, especially where the James Bond franchise is concerned. For 60 years — ever since Sean Connery first played Bond in “Dr. No” in 1962 — agent 007 fought for “Queen and country” on the movie screen. Earlier this year, as 007 was celebrating his anniversary and Elizabeth II was celebrating her own Platinum Jubilee, the official Bond Twitter account used that same phrase, “for Queen and country,” to mark the occasion.

Ten years earlier, Daniel Craig and the Queen even jumped out of a helicopter together while London was hosting the Olympics and the Queen was celebrating her Diamond Jubilee (while Bond was promoting the release of “Skyfall” and his 50th anniversary). Suffice it to say, with Bond’s history so entwined with that of the late Queen, it has left some fans wondering how the franchise plans to proceed in the wake of her death.

They’re also wondering who the next James Bond will be since Craig has now retired from the role after making his grand exit in last year’s “No Time to Die.” Bond producers Barbara Broccoli and Michael G. Wilson spoke to The Hollywood Reporter about that, with Broccoli also addressing how the Eon Productions series will adjust to the transition from Queen to King:

“As you say, Bond worked for Queen and country, and will now be working for King and country. He was a very loyal servant of the British government. He’s a classical hero that cares about the world and cares about humanity more than his own personal desires. It’s a very sad time in Britain, obviously, it’s a big time of transition, but she certainly has left a very extraordinary legacy.”

‘She’s Been A Great Supporter’

Though she was a real person, Queen Elizabeth II has also been dramatized as a character in numerous movies and TV shows, such as “The Queen” (where she was played by Dame Helen Mirren, who won an Oscar for her performance) and “The Crown” (where she has been played by Claire Foy and Olivia Colman, each of whom won an Emmy for their performances). The same goes for her son, Charles III, who is now the King of England.

Based on Broccoli’s comments, it appears that James Bond will now be serving King Charles III — or some other fictional offscreen version of him. Fellow Bond producer Michael G. Wilson spoke further to THR about the Queen’s support of the franchise as a British institution, saying:

“She’s been a great supporter of the Bond films over the years. And so have everyone else in the Royal Family — Charles and [Prince] William and everyone else. She’s been a steady hand. You don’t think of her so much as a person. It is a shock, no matter how much you anticipate it may happen.”

In the early stages, the Daniel Craig era of James Bond was greatly influenced by the Jason Bourne film series, and Bourne actor Matt Damon once criticized Bond as “an imperialist, misogynist sociopath” who was out of touch with today’s values. “No Time to Die” suggested that the Bond series may be looking to recalibrate, which it would have to do, anyway, whenever they find the next Bond.

While the general public may have mixed feelings about the Queen due to Britain’s imperialist history, her reign is part of both human history and movie history. Now that it and Craig’s tenure are over, it will be interesting to see where the Bond franchise goes from here.

The post Here’s How the James Bond Franchise Will Incorporate the Passing of Queen Elizabeth II appeared first on /Film.

‘Slash Film: Ritu Arya Borrowed A Trick From Angelina Jolie To Prep For The Umbrella Academy’

‘Slash Film: What Will Make Or Break Hulu’s Hellraiser, According To Doug Bradley’