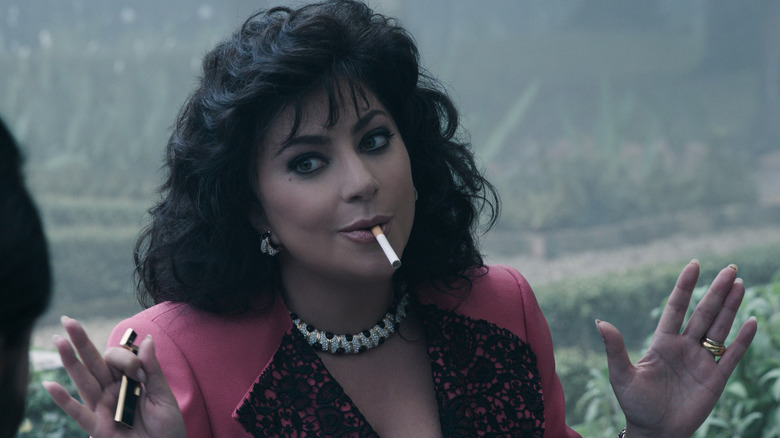 It’s Lifestyles of the Rich and Clueless in Ridley Scott’s “House of Gucci,” an odd duck of a film that wants to serve you both a scrumptious gourmet meal and greasy fast food in the same bite. There’s a wobbly, unbalanced quality to the entire thing, as Scott and company try to make something akin to a prestige drama cosplaying as a trashy soap opera. And yet it’s hard not to have fun with everything on display here — all the glitz, all the glam, all the bad accents.

I have long had a sneaking suspicion that Ridley Scott is something of a misanthrope, utterly disgusted with the stupidity of human beings. People criticize the dumb choices characters make on alien worlds in Scott’s “Prometheus” and “Alien: Covenant,” but those choices always seemed calculated to me. As if Scott were saying, “Human beings are inherently stupid and therefore make stupid choices.” Even if you don’t agree with that assessment, I think it’s at least safe to say that Scott has a low opinion of humanity. And that comes through loud and clear in “House of Gucci,” a film where every character is greedy, stupid, or both. There will be inevitable comparisons made between “House of Gucci” and the popular HBO series “Succession,” which is also about a family-run empire made up of reprehensible people. But “Gucci” isn’t as snappy and funny as “Succession.”

That’s not to say there aren’t laughs to be had here. Despite the film’s often nasty subject matter, “House of Gucci” makes us chuckle at how ridiculous everyone is up on the screen. They may wear the hottest fashions and dwell in palatial homes, but deep down, they’re all a bunch of trashy goofballs who have no idea how anything works. They just stumble through life and get by because of their wealth. And perhaps all of this will be a little too cruel, and too crass, for certain audiences. After all, “House of Gucci” is ultimately telling the story behind a real-life murder. But there’s not much sympathy to be found here, and that’s a feature, not a bug. 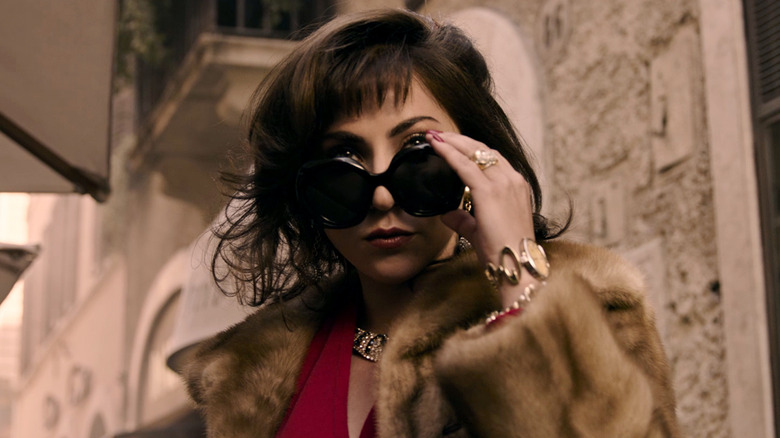 It’s 1978, and Patrizia Reggiani (Lady Gaga) is attending a swanky party. She saddles up to the bar and orders a drink only to get a surprise — the man behind the bar isn’t a bartender. He’s actually just another partygoer, and when he tells Patrizia his name, her eyes bug out of her head like a cartoon character. This man is Maurizio Gucci (Adam Driver), a member of the famous and wealthy Gucci family. Maurizio doesn’t really have any input in the family business — he’s currently going to law school. But that doesn’t matter to Patrizia. She simply hears the Gucci name and immediately sets out to sink her hooks into this affable dweeb.

For his part, Maurizio is smitten with Patrizia, and it’s easy to see why: she’s sexy, and she’s different from the rich snobs he’s spent his life around. But Maurizio’s father, Rodolfo Gucci (Jeremy Irons, who is the only cast member here giving what could be considered a subtle performance), sees through Patrizia and assumes that she’s got her eyes on Maurizio’s money. He’s right, of course, although Patrizia herself might not even realize that. Gaga plays the character as something of an enigma; she’s clearly up to no good, but she also seems to buy into the lies she tells. “I don’t consider myself a moral person,” she says later. “But I am fair.” Perhaps she’s spent her whole life lying and manipulating people to the point where she doesn’t realize she’s even doing it anymore. It’s just second nature. It’s who she is.

Gaga will be the draw for a lot of people here, and her performance is a lot of fun. In interviews, the singer/actress has made statements about going method and using her Italian accent for the entire production, even when cameras weren’t rolling. That’s all well and good until you hear the accent, which sounds a lot like a Dracula impression. It reminded me of the comical vampire accent Natasia Demetriou uses on the hilarious series “What We Do in the Shadows.” Which probably isn’t what Gaga was going for here. No matter. Intentional or not, there’s amusement to be had with that accent. And indeed the accent of pretty much everyone in the flick. The stacked cast leans into their respective attempts at an Italian accent, delivering lines as if they’re seconds away from either saying “I vant to suck your blood!” or “It’s a-me, Mario!” 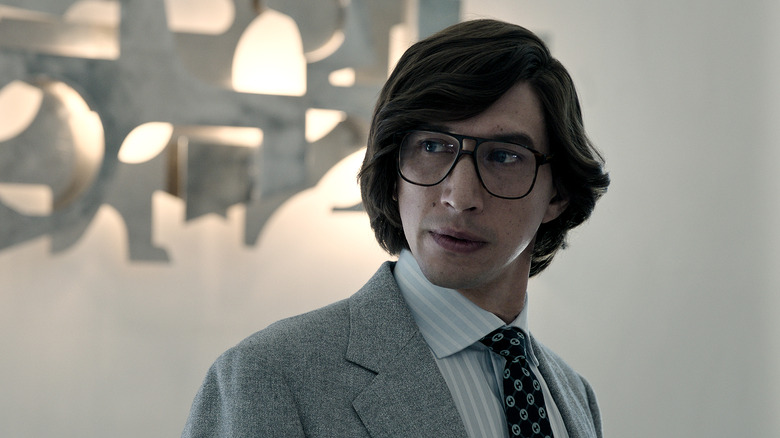 Despite Rodolfo’s misgivings, Patrizia and Maurizio are soon married. And almost immediately, Patrizia begins plotting and scheming. She gets in good with Maurizio’s uncle, Aldo Gucci (Al Pacino), who runs the Gucci empire and tells Patrizia she can take whatever Gucci products she wants, free of charge. Aldo’s son Palo (Jared Leto) is a disappointment, and in Maurizio, Aldo sees the more successful son he could’ve had. He brings his nephew into the fold, and Patrizia along with him.

Buried under make-up, Leto’s Palo is the broadest character of all, and while some will have no patience for what Leto is doing here, I must confess it worked for me. I’ve been mostly indifferent to Leto as a performer, but apparently all it takes for me to enjoy his work is to have him play a whiny loser who is constantly mocked by everyone he encounters. Palo is the most pathetic of the Gucci clan, and he’s constantly reminded of that fact by everyone he encounters. “You’re an idiot,” Aldo tells him at one point. “But you’re my idiot.”

None of this gives us much sympathy for the character, because again, everyone is repulsive here. But it’s hard not to laugh at moments like the one where Rodolfo takes a look at some of Palo’s fashion design sketches, which include pastels and browns together, and promptly declares them to be a “triumph of mediocrity.”

Slowly but surely, Patrizia manipulates things behind the scenes to help transform Maurizio into the head of the Gucci empire, and Maurizio goes along with it. At least at first. But when things start to spin out of control, with people going to prison and accusations of document forgery threatening to land Maurizio in legal trouble of his own, the once mild-mannered man begins to have serious second thoughts about his marriage. 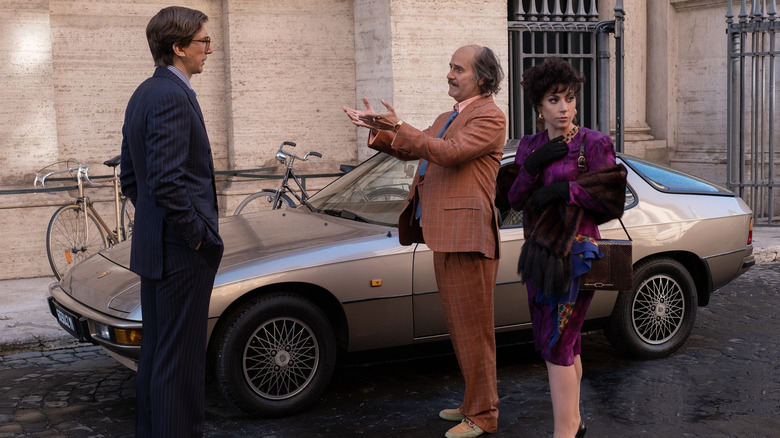 Anyone who bothers to look up the Wikipedia entry on the true story behind “House of Gucci” knows where this is leading: towards murder. But Scott and screenwriters Becky Johnston and Roberto Bentivegna don’t do the best job of setting this up. At some point, Maurizio’s attitude changes drastically. And while this can be partially chalked up to him finally becoming aware of his wife’s scheming, his actions seem to reflect something else. Is the film merely suggesting that power corrupts, and that Maurizio was a nice guy until he climbed the Gucci ladder? Maybe, maybe not. It’s almost as if there’s one extra scene missing, which is a curious thing since “House of Gucci” clocks in at 157 minutes.

Scott’s film seems surprisingly uninterested in the murder. Instead, “House of Gucci” unfolds as something of a soapy melodrama about a collection of oddballs. It’s not just the wealthy Gucci family that the film has fun with. There’s also a running subplot about Patrizia turning to a psychic, played by Salma Hayek, for advice. Just as Patrizia manipulates the Gucci family, so too does the psychic — who resides in a rundown apartment teeming with cats — manipulate Patrizia. Everyone here is out for themselves, and if someone gets hurt in the process, that’s the price of getting ahead.

I enjoyed all of this, and yet, I wanted more. Something is missing here. The unbalanced nature of the film — that tug of war between something classy and something lurid — ultimately hurts “House of Gucci.” I wish Scott had gone bigger here, and really leaned into the mockery. Instead, he seems content to keep things weirdly low-key, assuming that we’ll get the point. We do, but “House of Gucci” would’ve been more successful if it fully embraced its inherent trashiness. Give us that sweet, sweet trash, Ridley. It’s what we deserve.

The post House of Gucci Review: Lady Gaga Does Her Best Dracula Voice In Ridley Scott’s Wicked Satire of the Rich and Clueless appeared first on /Film.