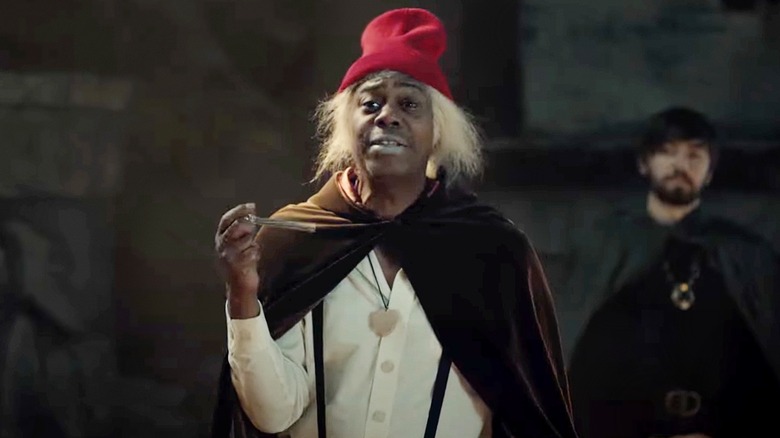 Dave Chappelle hosted this week’s episode of “Saturday Night Live,” which bid farewell to season 1 of “House of the Dragon” with a sketch that thoroughly roasted the Targaryens and their gross family tree. It also used the presence of House Velaryon, who are played by Black actors in the show, as an opportunity to bring back some familiar characters from “Chappelle’s Show.”

Set a couple of hundred years before the action kicks off in “Game of Thrones,” HBO’s new prequel series begins near the peak of Targaryen rule in Westeros. Based on George R.R. Martin’s book “Fire & Blood,” it tells the story of how the Targaryens were torn apart by a great civil war called the Dance of the Dragons, which set in motion the fall from power that ended with Jaime Lannister stabbing the Mad King in the back.

“House of the Dragon” also introduces House Velaryon, which is technically still around during the events of “Game of Thrones” but was never actually seen in the TV show. In Chappelle’s “SNL” sketch, the Sea Snake arrives on Dragonstone to back Team Rhaenyra … and he’s brought some allies with him.

‘Where Are These People From?’

Chappelle isn’t the first person to ask “where are these people from?” with regards to House Velaryon; it’s also been a point of discussion among “House of the Dragon” fans. Unlike the color-blind casting approach to “The Lord of the Rings: The Rings of Power,” the ethnicities featured in the “Game of Thrones” TV universe are firmly associated with particular regions of the fantasy world. The majority of people in Westeros are white, the people of western Essos are brown or olive-skinned, and in the far east of Essos lies Yi Ti, which is loosely based on Imperial China. The people of Dorne are played by Hispanic actors, and dark-skinned characters like Salladhor Saan (Lucian Msamati) and Xaro Xhoan Daxos (Nonso Anozie) mostly come from the Summer Isles in the south.

House Velaryon is one of only two noble families that survived the Doom of Valyria, and in “Fire & Blood” they’re described as having the same features as the Targaryens: white-blond hair, pale skin, and purple eyes. The purple eyes had already been dropped in “Game of Thrones” (every penny spent on purple contact lenses is one penny less to spend on cool dragon CGI), and book-accurate Velaryons would have been a bit of a headache for “House of the Dragon” viewers. There are already too many characters with pale skin and white hair to keep track of — a task made all the more difficult by season 1’s frequent time jumps and recasts. Add pale-skinned, white-haired Velaryons into the mix as well, and we’d be as doomed as Valyria.

“House of the Dragon” hasn’t yet given a reason for the distinct appearances of these two Old Blood families, but it isn’t really needed. Their shared trait of white hair is unusual enough by itself to denote their shared history (and make things awkward when Rhaenyra gives birth to brown-haired baby boys), and House Velaryon’s seafaring legacy creates the potential explanation that their ancestors originally sailed to Valyria from the Summer Isles. Besides, when “House of the Dragon” season 2 gets here, there’ll be far more pressing concerns.

The post House Velaryon Brings Some Old Friends To The Table In SNL’s House Of The Dragon Sketch appeared first on /Film.

‘KinoCheck : Pirates of the Caribbean 6, Godzilla and Kong, Harry Potter and the Cursed Child… KinoCheck News’

‘Slash Film: The Daily Stream: Disney Channel’s Theme: A History Mystery Is One Of The Year’s Best Documentaries’