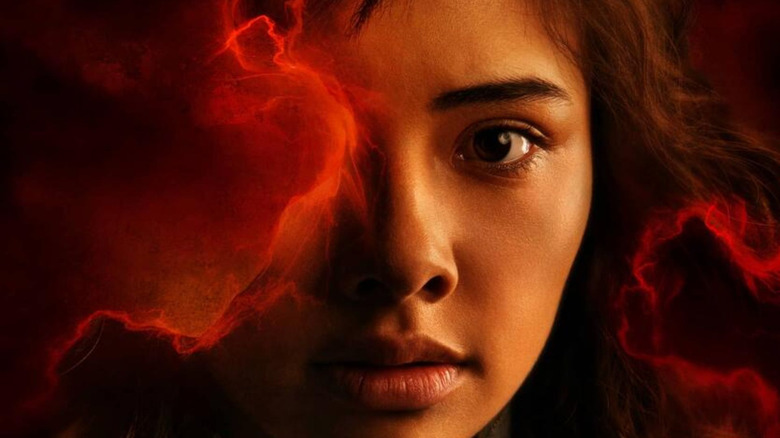 Naturally, a movie with a title like “Doctor Strange in the Multiverse of Madness” has a lot of moving parts. With all the interconnected storylines and a growing list of heroes, that’s a given in any recent Marvel movie — and certainly one that involves smashing through the multiverse while a powerful witch wields chaos magic. With Sam Raimi at the helm, this paves the way for some of the most bizarre and memorable moments in the MCU thus far — but it also means that other elements fall to the wayside. In this case, the female leads at the center of the Strange sequels suffer the most. For Wanda Maximoff, this manifests as a complete betrayal of her “WandaVision” arc, while for Christine Palmer, this marks the second Marvel movie to waste the talents of Rachel McAdams. But most egregiously is what becomes of America Chavez in the very film that introduces the beloved character to the cinematic side of Marvel stories.

That teenager glimpsed rocking a jeans jacket in all the trailers is revealed to be America (Xochitl Gomez), a mysterious multiverse-hopping kid on the run from a dark entity trying to steal her powers. Keeping her safe is priority #1 so Doctor Strange (Benedict Cumberbatch) enlists Wanda (Elizabeth Olsen) for help in keeping the powerful objec— ahem, girl, from the clutches of evil. Then he discovers Wanda is the terrifying culprit behind all the monster attacks and the real plot kicks into gear. So begins her witchy warpath (with an alarmingly high body count) — Wanda is the big bad and America spends 90 minutes narrowly avoiding capture until the third act kicks in and the inevitable confrontation takes centerstage. All the while, we ricochet between Doctor Strange pining for a variant of his ex-girlfriend and Wanda longing to reunite with her variant children. And America ends up left behind.

Warning: spoilers abound for “Doctor Strange in the Multiverse of Madness.” 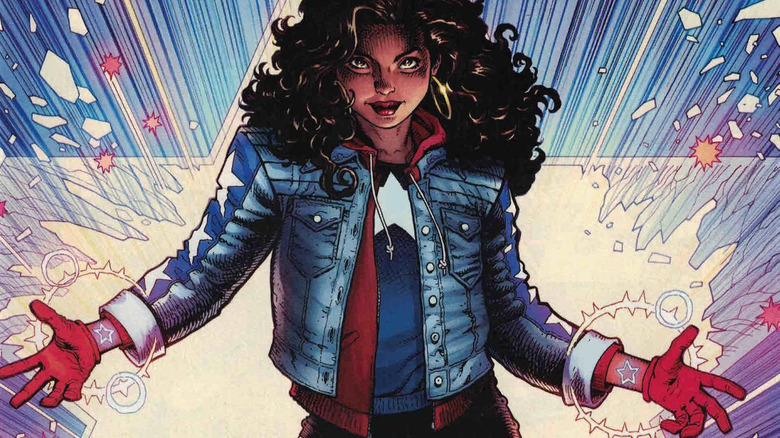 As she’s known in the comics, America Chavez (aka Miss America) is an absolute badass. The headstrong, portal-punching supe can hold her own against some of Marvel’s most powerful — whether that means flying alongside Captain Marvel at light speed or punching Loki through a window. America originated from a realm outside of time and space, but ran away from home after a traumatic event that ripped her family apart. She spent her childhood traveling between dimensions and eventually, settled on Earth as a vigilante. She has all of the superhero essentials (flight, super speed and super strength), but what makes her stand out is her ability to kick/punch holes into reality, opening portals to alternate dimensions. Introduced to Marvel Comic readers in 2011, America’s popularity grew so strong that she joined the Young Avengers ranks and became the first Latina lesbian heroine in an ongoing Marvel series. With Marvel Studios’ growing its roster of heroes, efforts to up their diversity game and hints of a Young Avengers story to come, the hype for her MCU entrance was massive. But there was always reason to worry.

For one thing, Marvel has a shoddy track record when it comes to queer characters (though there have been improvements, thanks to recent entries). It’s not hard to imagine a reality where her confident Latina lesbian identity is shoved aside and sure enough, it was revealed before the film hit theaters that “Multiverse of Madness” featured only a nod to this, via a brief 12-second mention of American’s two moms. So would her own queerness be ignored? The answer is yes, but that’s just a symptom of the larger problem: America is barely a character in this movie. She’s treated as a glorified MacGuffin — the key to the multiverse for the hero and villain to duke it out over. She’s just a power source for Wanda that Doctor Strange must keep from her reach. All the while, he might as well be clutching an infinity stone or a glowing suitcase because outside of needing to be protected, America doesn’t have much going on. This isn’t to say Xochtl Gomez isn’t a welcome addition to the movie — watching the charismatic teen bounce off of Cumberbatch and Benedict Wong is delightful, but her performance should have more than witty jabs and fearful looks. Her lack of a story arc gives her nowhere to go.

Nobody Puts Miss America In A Corner 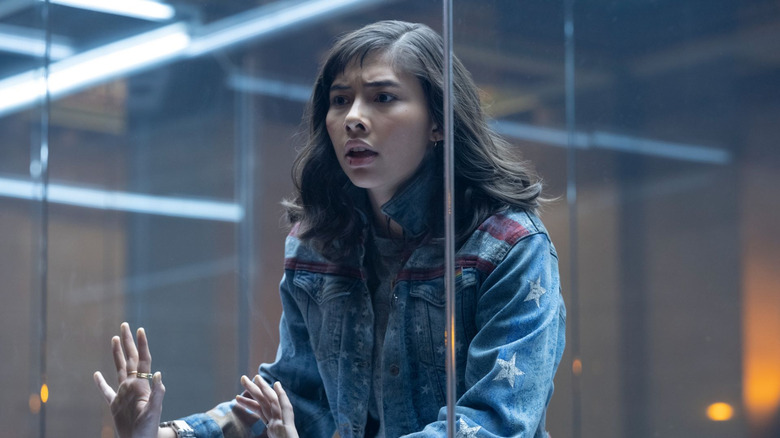 “Multiverse of Madness” introduces a younger America than comic fans may recognize — Gomez’s character has no control over her abilities, only opening portals in times of emotional distress. Despite her lack of control, America is incredibly powerful. She can do something that neither of the magic wielders leading this story are remotely capable of and if she could weaponize it properly, she’d be a force to be reckoned with. That’s why she’s placed on such shaky ground — so unsure of her abilities that she seeks out a protector in all the variant Strange’s. Buried in “Multiverse of Madness,” is something that vaguely resembles an arc for America: over the course of the film, she goes from lacking confidence to taking charge and protecting herself against Wanda. But how does she get there? The answer is infuriating: her growth boils down to a single pep talk.

Watching America grow confidence in her powers sounds like an interesting plot but “Multiverse of Madness” is too overcrowded to make room for her. Instead we get scattered moments throughout the movie, hinting at the power she hasn’t learned to tap into: like when she gets emotional and opens up the portals that whisk her away. Or when Wanda charges after her at the Illuminati base and she manages to break free from her glass cage. Then, in the final confrontation — when it’s time to take Wanda down a peg — Strange gives her one of those the power was in you all along speeches and suddenly, she knows exactly how to fend off the Scarlet Witch.

Painfully missing from all this is any sense of interiority from America. Sure, a walk down memory lane reveals her tragic past but then spends zero time unpacking it. Stephen gets to glimpse his past too and sees a memory of time spent with Christine. Say what you will about the absolute insanity of hinging his arc on the flat, basically nonexistent romance with his ex, but at least his memory moment comes back around, pushing him towards a realization about the pain of losing Christine. Other than setting up the possibility of America searching for her moms in a later film, what’s the point of her scene? There’s no context for anything she’s going through or hint at how she’s coping — at least not until the movie needs to move from one point to another and deigns to let her powers come into play. Otherwise, she spends the movie as a doe-eyed MacGuffin, shrieking, running and staring terrified into the camera. This is a character highly admired in the comics for her being a fierce, powerful hero with a heart of gold but none of that breaks through. Maybe they’re saving the good stuff for her solo outing, but between the acting chops of Gomez and the vast potential of America Chavez’s badassery, there was more than enough greatness to around.

‘Coming Soon: Emergency Trailer: It’s Not What It Looks Like in Amazon Comedy Pic’