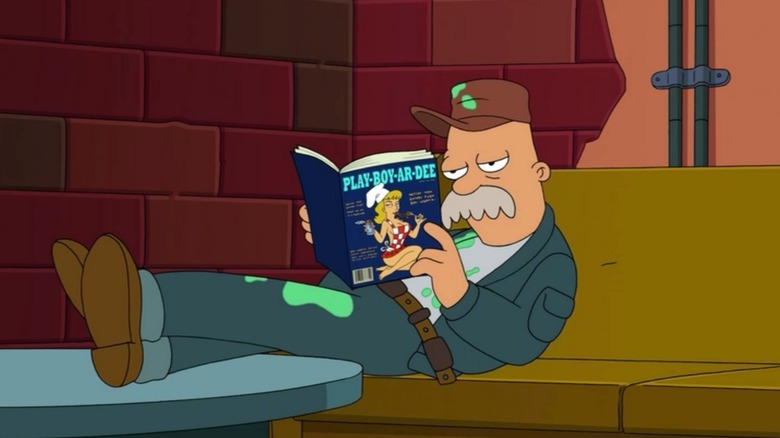 The first time “Futurama” audiences saw Scruffy the Janitor, he was standing in the background, quietly doing his job in the episode “My Three Suns.” Later, in “Anthology of Interest I,” Scruffy was brought into the building’s Accusing Parlor (a room specifically built for whodunnit scenarios) where he and Leela (Katey Sagal) both admitted to never having seen each other before. Initially, Scruffy was a background character, only speaking to provide a quick giggle; he couldn’t fix the building’s boiler because of a “schedule conflict,” and a more intense interest in this month’s issue of Zero-G Juggs.

Scruffy was voiced by comedian, writer, and actor David Herman, who broke out in the mid 1990s on “MADtv” and played Michael Bolton in the 1999 comedy “Office Space.” He has starred in many, many TV shows and movies besides — his filmography is too vast to list here. On “Futurama,” in addition to Scruffy, Herman played the characters of Larry (Mom’s middle son), Morris (Leela’s dad), New York Mayor Poopenmeyer, the crazed robot Roberto, Professor Farnsworth’s smug rival Dr. Ogden Wernstrom, and many others. One has to admire cartoon voice actors whose credits include “Various” or “Additional Voices.”

Scruffy, as it turns out, was meant to be a background “gag” character, and it was Herman’s performance that saved Scruffy from being repeatedly crushed to death. “Futurama” co-creator Matt Groening explained the whole story at a San Diego Comic-Con panel back in 2011.

Life And Death Are A Seamless Continuum 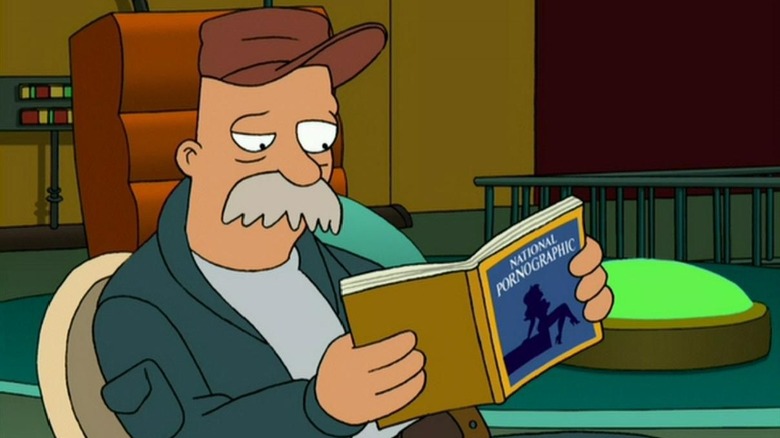 There was a fun running gag in early episodes of “South Park” wherein the character of Kenny dies in every single episode only to mysteriously return the following week. Groening, possessed of a similar dark sense of humor, thought it would be funny to have a similar gag in “Futurama.” Early in the production of the show, “Futurama” was intended to be something a skosh darker and dystopian. While it does take place in a world with suicide booths on every corner, Groening wanted the hopelessness to be even more pervasive. Less “Star Trek” and more “Brazil.” Scruffy, as “Futurama” co-creator David X. Cohen pointed out, was one of the first characters designed for the show.

Scruffy, a mere janitor in an uncaring future, was a cog in a machine. A faceless life meant to be disposed. As such, as Groening explained at Comic-Con, Scruffy was meant to die. Again and again. He said:

“Well, the original idea of Scruffy was that every time the spaceship landed, he was gonna get crushed and killed. And then David [Herman] appealed to my sense of compassion. We love Scruffy because we use him so little. I would imagine that there’s probably some future with him and mop bucket.”

Scruffy went on to appear in over 40 episodes of the show and all four “Futurama” movies. Like many background characters in “Futurama” — and on Groening’s “The Simpsons” for that matter — Scruffy expanded into his own man, providing gruff commentary, but also interesting bits of backstory. At one point, Scruffy points out that prison isn’t so bad, in that you can “make sangria in the terlet. O’ course it’s shank or be shanked.” Scruffy was in prison? For what? When? Quelle intrigue.

‘The Prisoner Of Benda’ 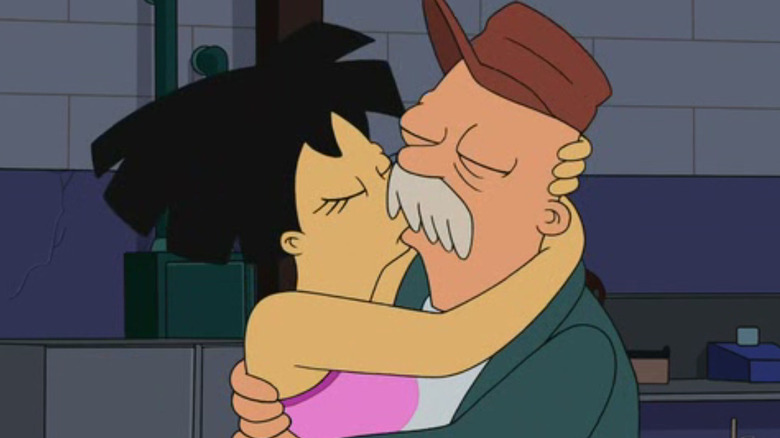 The cryptic “future with mop bucket” that Groening refers to is from the sixth season episode “The Prisoner of Benda.” In that episode, Professor Farnsworth (Billy West) invents a body-swap machine, and every cast member eventually swaps bodies at least once with another person. Amy (Lauren Tom) switches bodies with Bender (John DiMaggio) who, for complicated plot reasons, switches bodies with Scruffy’s robotic talking wash bucket (Tress MacNeille), a vessel not previously used on “Futurama.”

Later that night, the bucket, now in the body of a human woman, approaches Scruffy and admits that it has been in love with him for years. Scruffy reluctantly rebuffs the bucket’s advances. “It would be sweet for a while, but in the back of our minds we’d know that I’m a man, and you’re janitorial equipment.” The bucket announces that they could run away. In another city, they could be whoever they want. Scruffy tearfully pushes her away. “Go now. Before I beg you to stay.”

The romance between Scruffy and his wash bucket was never resolved. The two presumably had to continue to work together, tormented by their feelings. Groening, in a fit of compassion, wanted to give Scruffy what he deserved. Perhaps when “Futurama” is revived — again — Scruffy’s romantic life will be more deeply explored. Perhaps the wash bucket will move to that other city and find love with another janitor. Or perhaps Scruffy will begin dying on a regular basis. “Futurama” in unpredictable that way.

The post How Scruffy’s Voice Actor Changed His Fate On Futurama appeared first on /Film.