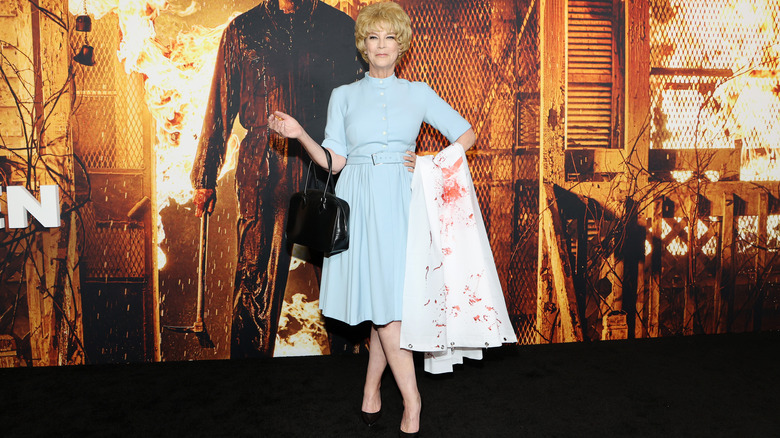 Scream Queen Jamie Lee Curtis walked the red carpet at the costume party premiere of “Halloween Kills” on Tuesday in true class and fashion. To promote the latest film in the Halloween franchise, Curtis decided to pay homage to her mother, Janet Leigh, who starred in Alfred Hitchcock’s “Psycho.” Curtis was all smiles while donning a blonde wig, blue dress, and a bloody shower curtain draped over her arm. The reference was a loving reminder that she comes from horror royalty and is here to slay.

Janet Leigh passed away in 2004 at the age of 77, but had the opportunity to work with her daughter on John Carpenter’s “The Fog” as well as director Steve Minor’s “Halloween H20: 20 Years Later.” Leigh is most known and loved for her role as Marion Crane in “Psycho.” Her performance was so strong and iconic that she won a Golden Globe for Best Supporting Actress and was nominated for the Academy Award for Best Supporting Actress. Her on-screen death is still studied by film scholars and critics to this day, and the use of editing and her controversial (for the time) slaying in many ways defined a pivotal shift within the horror genre. There’s even an entire film called “78/52” that goes into extreme detail about that one particular scene which required 78 setups and 52 cuts.

Curtis made her film debut with John Carpenter’s 1978 “Halloween” around 20 years old. Her role as Laurie Strode quickly established her as a scream queen, and she went on to star in many other horror films including “Prom Night,” “Terror Train,” and “Road Games.” She reprised her role as Laurie with other films in the “Halloween” franchise like “Halloween II,” “Halloween: Resurrection,” and David Gordon Green’s 2018 “Halloween.”

Now, Curtis is back with Green’s follow-up film, “Halloween Kills.” 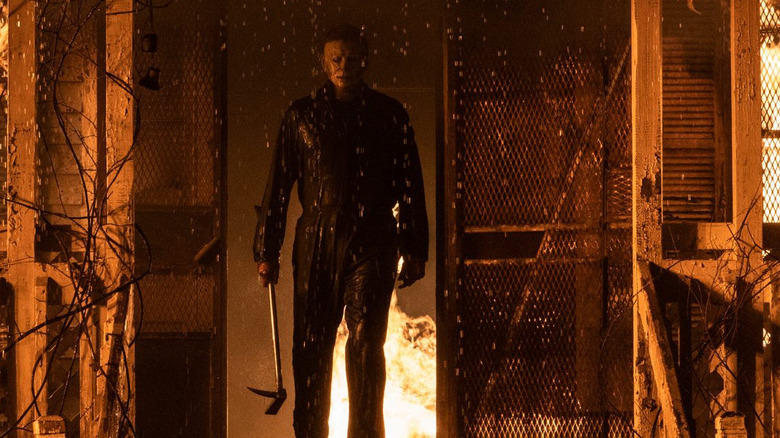 In an interview with Variety, Curtis stated that the Halloween franchise is “the ultimate good versus evil.”

“Laurie Strode represents the quotidian, quintessential, innocent American teenage girl, that is innocence personified. And when you collide it with the essence of evil which is Michael Meyers, you create a tension that you the audience member wants to protect her. It’s old school. Every Western has a good guy and a bad guy. Shakespeare, the Greeks, there’s always been this collision between good and evil, and it’s been very successful and emotional at the same time.”

Director David Gordon Green elaborated on the franchise’s notorious boogeyman by saying, “the beauty of Michael Meyers is it’s an expressionless, emotionless face, and so we can project our fear onto him, or if you like having fun at a scary movie, let’s go scream our heads off and eat some popcorn.” The latest films in the franchise explore generational trauma on top of the familiar commentary surrounding life, death, and survival.

Like many other films, the premiere for “Halloween Kills” was initially delayed due to the pandemic. However, audiences are relieved that Myers will return to the silver screen just in time to celebrate the best holiday of the year. Curtis greeted fans on stage at the movie’s Beyond Fest premiere with a big “Happy f*cking Halloween!” to get the audience even more pumped. Our favorite final girl and scream queen knows how to deliver, and you can tell she truly loves the horror genre as well as its loyal fans.

The post Jamie Lee Curtis Walked the ‘Halloween Kills’ Red Carpet Dressed as Her Mom and Has Already Won the Holiday appeared first on /Film.