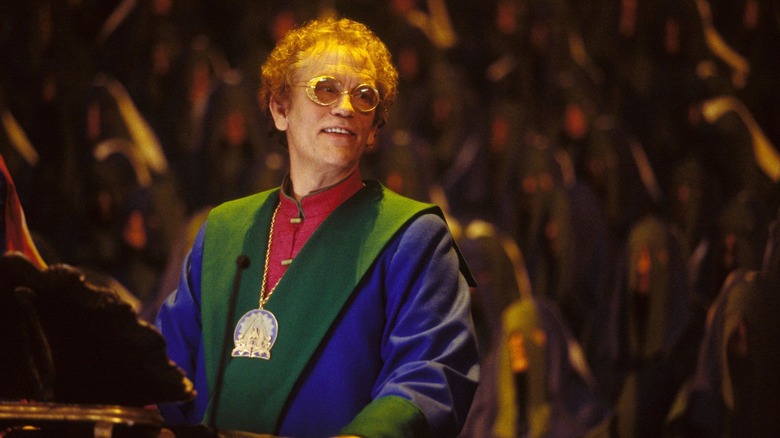 When we consider John Malkovich playing a parody of himself in “Being John Malkovich,” there comes the question: Why John Malkovich? Why not “Being Kurt Russell” or “Being Alan Rickman,” for instance? Screenwriter Charlie Kaufman answered this, saying there was no other actor in mind when he wrote the script, due to Malkovich’s “quality of unknowability” (via Rolling Stone).

And there we have the main draw of John Malkovich as a Hollywood actor, a visage that is instantly recognizable yet as inscrutable as the great stone faces of Easter Island. There isn’t anyone else remotely like him, which adds to his enigma. Although he had hair when starting out, he’s better known for that magnificent bald dome that hints at a mercurial intellect. Beneath that, there is the interrogative, simian brow that can measure degrees of rage or contempt by how many lines Malkovich furrows into it; then the beady yet penetrating eyes, the hollow cheeks, the prominent top lip and teeth, and the tapering chin that more recently has often rocked a professor-like beard.

It’s a remarkable head, matched by the way Malkovich speaks and carries himself. That voice, veering from dry monotone to spitting rage, invites all the S’s: Sly, sneering, sibilant, sinister, supercilious, superior, and scornful, while his body language carries the cool arrogance of someone who believes they are by far the smartest and most important person in the room.

In short, he is an actor born to play criminal masterminds and Machiavellian schemers and, despite his vast body of work, he is probably best known for his villainous roles; I’m even willing to wager that you’re picturing him holding a gun to a cuddly toy’s head as you read this. Yet for all his success in these parts, it wasn’t a conscious career decision from Malkovich himself. 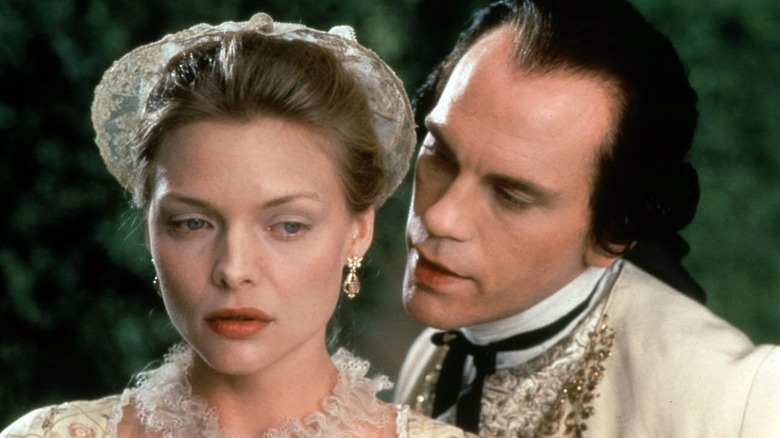 Screen villainy from the late ’80s to the early aughts was dominated by a rogue’s gallery of Brits, kicked off by Alan Rickman’s brilliant turn as Hans Gruber in “Die Hard.” Gary Oldman chewed scenery in several high-profile action flicks while David Suchet played an Islamic terrorist in “Executive Decision.” Anthony Hopkins won an Oscar for portraying Hannibal Lecter in “The Silence of the Lambs” while Ben Kingsley played deliciously against type as a violent nutjob in “Sexy Beast.”

In this period proliferated by British thesps, John Malkovich was one of few American actors who really stood out in similar roles and, like his counterparts from across the Atlantic, he started out in the theater. When he made the leap from stage to screen, it was in relatively benign roles. He earned an Oscar nomination for his performance in “Places in the Heart,” gave an excellent supporting turn in “The Killing Fields,” and played a surrogate father figure to a young Christian Bale in “Empire of the Sun.”

Then came the role that made Malkovich a true star and set him on course for villainy, playing the reptilian seducer Valmont in Stephen Frears’ “Dangerous Liaisons.” As a very atypical leading man, he may have seemed an unusual choice for the part, but he dominated the film with his magnetic charisma and dark sexuality. The devious turn was reflected in real life, as he began an affair with co-star Michelle Pfieffer and wrecked his marriage with Glenn Headley.

One thing for sure is that Malkovich is an incredibly hard-working actor, clocking up over 80 credited screen roles. He has portrayed a wide variety of characters throughout that huge body of work, but it is his bad guys that have really stuck in the popular imagination. 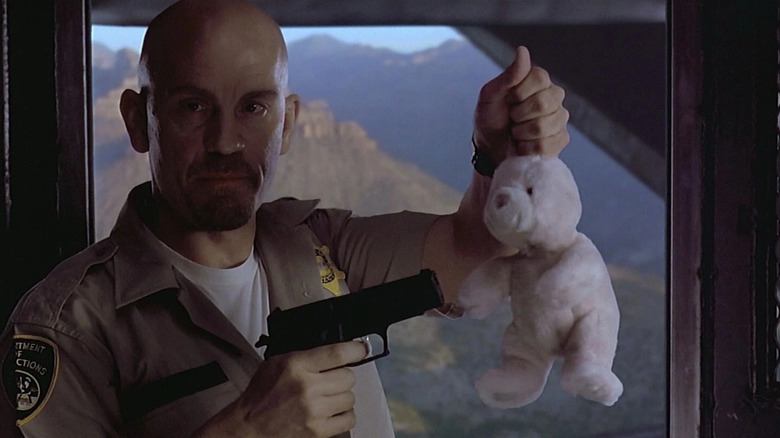 The success of John Malkovich’s slithery performance in “Dangerous Liaisons” established him as an actor capable of embodying treacherous characters, and during the ’90s he made a serious impact playing very clever bad guys. Compared to his other roles, they were relatively thin on the ground to the point of almost being outliers; he also played the dimwitted Lennie in “Of Mice and Men,” for instance, but it was the villains that really stood out.

Firstly, Malkovich earned his second Oscar nomination playing Mitch Leary in Wolfgang Petersen’s suspenseful political thriller “In the Line of Fire.” With limited screen time, he made a big impression as the meticulous would-be assassin hellbent on taking down the President and taunting Clint Eastwood’s grizzled old Secret Service agent along the way. It was a chillingly controlled performance that gave the rare sense that the bad guy might actually come out on top this time.

After that, there was a less-celebrated role as a classic literary and cinematic monster, teaming up again with “Dangerous Liaisons” director Stephen Frears to play Dr. Jekyll and Mr. Hyde in “Mary Reilly.” He gave a hammy but entertaining dual performance but the film was sunk by Julia Roberts, horribly miscast as the eponymous maid and adopting one of the worst Irish accents ever attempted onscreen.

Then came the big one, the movie that will perhaps forever associate Malkovich with villainous roles: Cyrus “The Virus” Grissom in Simon West’s outrageously fun “Con Air.” With an aura of cool calculation and intense menace among a chimp’s tea party of cartoonish criminals, he felt like a genuinely dangerous foil for Nic Cage’s repentant crook. 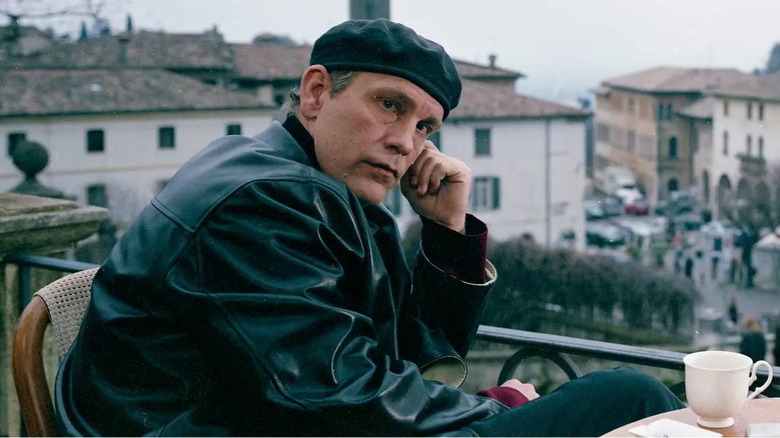 In over two decades since that convict plane crash-landed on the Vegas Strip in “Con Air,” John Malkovich hasn’t had all that many notable villain roles, although the ones he has taken are obviously tailored to benefit from his bad guy quotient. The most substantial was playing an older version of Patricia Highsmith’s Tom Ripley in “Ripley’s Game,” while his unnerving screen presence was heightened by creepy special effects in “The Hitchhiker’s Guide to the Galaxy.” Just for larks, he also lent his distinctive voice to a dastardly octopus in “Penguins of Madagascar.” Regarding the turn towards villainy in his career, Malkovich is very matter-of-fact (via NME):

“Those were just the roles I was offered. For ‘Liaisons’ I was quite surprised to be offered that role at all. I wasn’t offered the Clint Eastwood role for ‘In the Line of Fire’ because why would I? To be honest I don’t think of any of them as villains per se anyway, more as studies in talent gone awry, or at least potential gone awry.”

Approaching his 70th year, Malkovich is showing no sign of slowing down. He has several upcoming films, one of which is notably in keeping with the topic. In “Mindcage,” he plays an incarcerated serial murderer giving advice to a pair of detectives on the trail of a copycat killer. That setup sounds very familiar, so it will be interesting to see if Malkovich is able to out-Lecter Hannibal Lecter. With Martin Lawrence and Melissa Roxburgh as the detectives I wouldn’t put money on it matching “The Silence of the Lambs,” but given Malkovich’s affinity for dark characters, it should be worth a ticket and a bucket of popcorn.

Read this next: The 20 Greatest Human Villains In Movie History

The post John Malkovich’s Streak Of Villainous Roles Wasn’t Something He Controlled appeared first on /Film.

‘Slash Film: The Guardians Of The Galaxy Holiday Special Reminds Us That DC Comics Exist In The MCU’