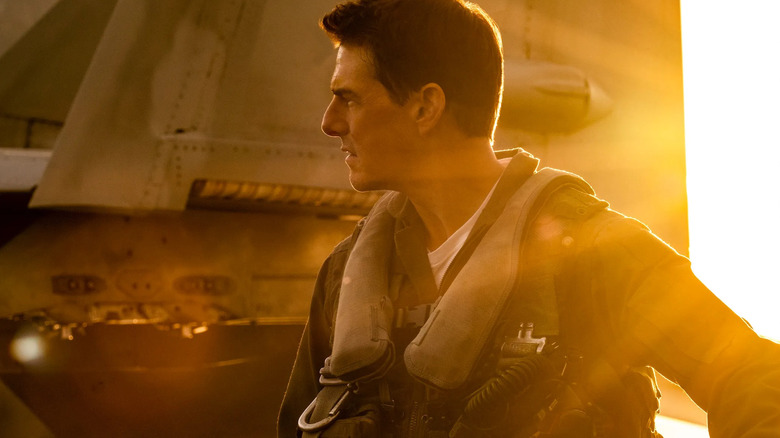 It’s almost time to re-enter the danger zone, with “Top Gun: Maverick” set to arrive in theaters later this month, bringing back Tom Cruise as hotshot fighter pilot Captain Pete “Maverick” Mitchell. Why make a sequel to a 40-year-old classic you ask? Judging by the buzz that emerged after a screening at last month’s CinemaCon, the real question is why the hell not? “Top Gun: Maverick” is fitting together all the pieces of the classic film that audiences loved so much, to dazzle a new generation on the big screen. This means lots of air-bound spectacle, killer action scenes, Tom Cruise doing dangerous stunts, and (hopefully) a sun-kissed volleyball sequence.

But not all the crucial “Top Gun “elements are visual. The soundtrack for the original film was a key part of the film’s success and enduring legacy — so naturally, “Top Gun: Maverick” is coming out swinging with some heavy-hitters of its own. Giving us our first taste of the movie magic, Lady Gaga just released “Hold My Hand,” her original song featured on the soundtrack and in the film. You won’t be too shocked to learn that jets aren’t the only part of this movie primes to blow us all away. Gaga is no stranger to belting her way into our hearts and “Hold My Hand” doesn’t hold back. You can listen to the full song below.

Does “Hold My Hand” take your breath away? Just as “Top Gun: Maverick” is tasked with following up Tom Cruise’s classic ’80s action flick, Lady Gaga’s new original song is following in some pretty big footsteps. The breakout song of the first film was easily Berlin’s “Take My Breath Away,” which went on to win Best Original Song at the Academy Awards. And that was just one of many hits on a soundtrack that also included “Danger Zone,” “You’ve Lost That Lovin’ Feelin’,” and “(Sittin’ On) The Dock of the Bay.” Lady Gaga had to bring her A-game and as usual, she did not disappoint.

“Hold My Hand” is a soaring power ballad, which is fitting for a movie that has to strike a balance between ’80s nostalgia and fitting into a 2022 landscape. Co-written and produced by Gaga and BloodPop, the song is also an opportunity for the music star to continue making her cinematic mark, after winning her first Oscar in 2019. (She previously co-penned and performed “Shallow” for Bradley Cooper’s directorial debut “A Star is Born.”) Given her track record and the performance of the previous “Top Gun” anthem, there’s a good chance that Gaga will begin drumming up Oscar buzz soon after the film’s release.

In tandem with the CinemaCon screenings, Gaga shared an Instagram post that called her song a “love letter to the world.” She wrote:

“I didn’t even realize the multiple layers it spanned across the film’s heart, my own psyche, and the nature of the world we’ve been living in. I’ve been working on it for years, perfecting it, trying to make it ours. I wanted to make music into a song where we share our deep need to both be understood and try to understand each other—a longing to be close when we feel so far away and an ability to celebrate life’s heroes.”

In the same post, Gaga also thanked the movie’s star, Tom Cruise, and composer Hans Zimmer. “Top Gun: Maverick” is directed by Joseph Kosinski, with a script from Christopher McQuarrie, with Ehren Kruger and Eric Warren Singer. The film stars Cruise as Maverick, and Miles Teller, as the son of the late pilot Goose, played by Anthony Edwards in the film. Val Kilmer will return as Iceman, now a Vice Admiral and the film also stars Jennifer Connelly, Jon Hamm, and Ed Harris.

After more than thirty years of service as one of the Navy’s top aviators, Pete “Maverick” Mitchell (Tom Cruise) is where he belongs, pushing the envelope as a courageous test pilot and dodging the advancement in rank that would ground him. When he finds himself training a detachment of Top Gun graduates for a specialized mission the likes of which no living pilot has ever seen, Maverick encounters Lt. Bradley Bradshaw (Miles Teller), call sign: “Rooster,” the son of Maverick’s late friend and Radar Intercept Officer Lt. Nick Bradshaw, aka “Goose.” Facing an uncertain future and confronting the ghosts of his past, Maverick is drawn into a confrontation with his own deepest fears, culminating in a mission that demands the ultimate sacrifice from those who will be chosen to fly it.

Read this next: The 20 Greatest War Films Of All Time

‘Slash Film: The Yorgos Lanthimos Role Elizabeth Olsen Missed Out On Because Of Marvel’