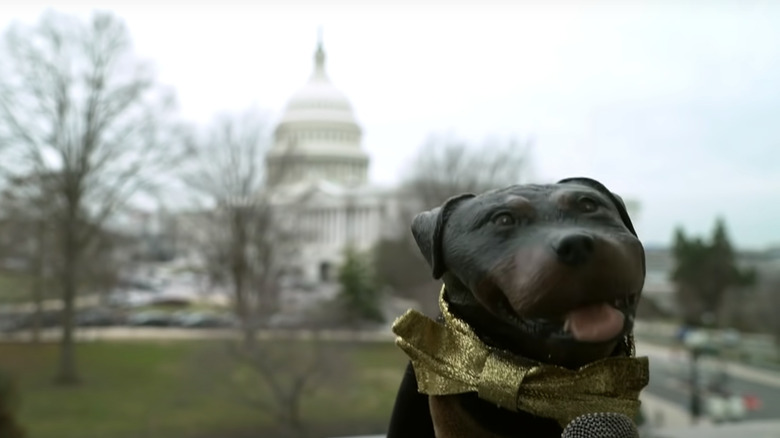 When police at the U.S. Capitol in Washington, D.C. found Triumph the Insult Comic Dog roaming their halls with a camera crew, they thought, “Here’s a party … for us to poop on.” It’s as if Triumph’s catchphrase entered their heads as they arrested creator Robert Smigel and eight other crew members, who were shooting a comedy segment for “The Late Show with Stephen Colbert,” featuring the cigar-chomping puppet.

This is not an April Fools’ drill, though the simulation may be breaking down. Security around the Capitol has understandably been tight since the insurrectionist riot that took place last year on January 6. Even now, the news is filled with updates from the Select Committee hearings that are underway investigating the attack.

The Capitol Police issued a statement (per Variety) that the nine “Late Show” crew members it detained were “unescorted and without Congressional ID, in a sixth-floor hallway” of the Longworth House Office Building, one of the facilities for the House of Representatives on the Capitol grounds. According to the statement:

“The building was closed to visitors, and these [arrested] individuals were determined to be a part of a group that had been directed by the USCP [United States Capitol Police] to leave the building earlier in the day. They were charged with Unlawful Entry. This is an active criminal investigation, and may result in additional criminal charges after consultation with the U.S. Attorney.”

Throwing The Book At Triumph

This whole arrest sounds like a misunderstanding, though it’s possible the production crew pushed its luck and filmed guerrilla-style against police orders, as the USCP’s no-nonsense statement suggests. Variety mentions that it was outside the offices of two Republican House members, so it’s also possible one or more of them declined to be interviewed by the Yugoslavian mountain dog and decided to call the cops on him instead.

CBS, which broadcasts “The Late Show with Stephen Colbert,” issued its own statement:

“On Wednesday, June 15 and Thursday, June 16, Triumph the Insult Comic Dog was on-site at the Capitol with a production team to record interviews for a comedy segment on behalf of ‘The Late Show.’ Their interviews at the Capitol were authorized and pre-arranged through Congressional aides of the members interviewed. After leaving the members’ offices on their last interview of the day, the production team stayed to film stand-ups and other final comedy elements in the halls when they were detained by Capitol Police.”

Some might say Triumph’s reign of insults and lawlessness has long been out of control. It started on “Late Night with Conan O’Brien” 25 years ago, and in their zeal to prevent another incident at the Capitol, maybe the police thought, it’s high time someone pooped on him.

I say, prosecute the puppet to the fullest extent of the law and let everyone else go. Triumph is clearly the ringleader, and I feel sorry for Smigel or whoever it is that has their hand up Triumph’s butt at any given time. It’s practically begging to be pooped on.

Let’s hope the police let the crew off with a slap on the puppet wrist. We’ll keep you updated should the case against “The Late Show” and Triumph go to trial.

David Cronenberg’s ‘Crimes of the Future’ Now Available on Digital!