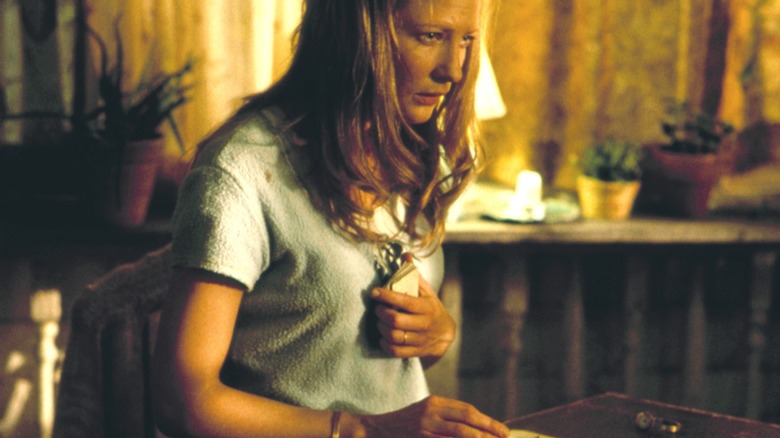 We need to talk about Sam Raimi‘s most criminally underrated film: the 2000 supernatural thriller, “The Gift.” Raimi has churned out a wide range of movies across genres, and some of his films, despite dismal box office performances, have garnered acclaim over the course of time, such as his revisionist Western, “The Quick and the Dead.” “The Gift” has been forgotten, however, and it should not be.

His “A Simple Plan” also comes to mind, which was a neo-noir adaptation starring Bill Paxton, but the film basked in the glow of various award nominations despite underperforming at the domestic level. However, Raimi’s “The Gift” is extremely under the radar — it bombed at the commercial level and attracted little critical attention, but is a film that absolutely deserves the love and praise it demands.

Honestly, I don’t know why people do not talk enough about “The Gift” — it is a tense, atmospheric thriller rife with Raimi-esque horror elements that are neither too crampy (as is his general trademark) nor too self-conscious. Starring an ensemble cast with a young Cate Blanchett slipping into the shoes of a clairvoyant, empathetic protagonist, “The Gift” has it all, ranging from an exciting murder mystery to a sense of the unknown, whilst padded with surreal sequences that add so much to the central narrative.

A Psychological Puzzle Worth Navigating 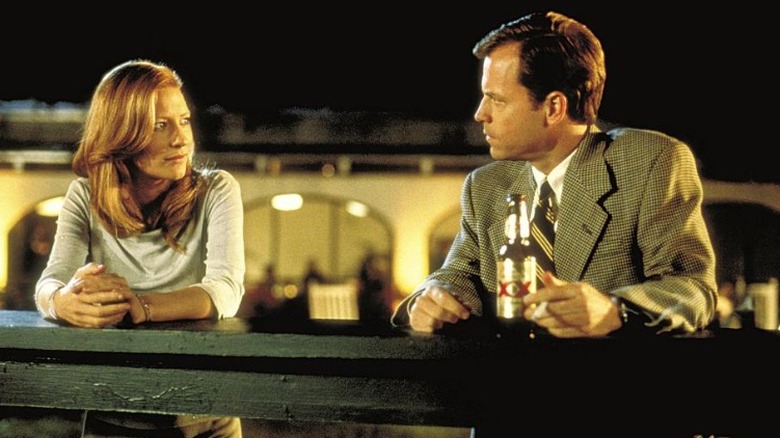 “The Gift” opens with clairvoyant tarot reader Annie (Blanchett) laying down her cards, reading the fortune for a local woman, Valerie Barksdale (Hilary Swank), who is dealing with spousal abuse and seeking advice from Annie. While Annie tells her to seek legal help, Valerie seems afraid of her husband, Donnie (a delightfully villainous Keanu Reeves), but keeps visiting Annie for advice anyway (which is understandable, as Annie is an extremely empathetic character, who is almost always there for others, maybe at the cost of deprioritizing herself). Having lost her husband in an accident, Annie lives with her three kids and works hard to provide for them while healing from the grief of losing a loved one.

Donnie, being the abusive scumbag he is, threatens Annie with harming her children, as she had advised his wife to leave him. While this was not Reeves’ first role as a dubious, terrible character (he played a killer in 2000’s “The Watcher”), he brings an ominous edge to Donny, a man who abuses women on a daily basis, and expects to get away with it, sans consequences. As if Annie already does not have too much on her plate, a local woman, Jessica (Katie Holmes), who is engaged to local principal Wayne (Greg Kinnear), goes missing, and the police turn to Annie’s gifts, as for her to guide them about her whereabouts with their intuition. This is when the plot takes an even nastier turn, delving into darker, emotionally-ravaging subject matters.

“The Gift,” first and foremost, is a mystery thriller, and the core focus is Jessica’s disappearance, and Annie’s indirect involvement unravels hidden secrets and foul play at hand. There’s also Buddy (Giovanni Ribisi), Annie’s friend, who endured trauma as a child at the hands of his father, which eventually ends in an act of violence (these sequences are genuinely distressing to watch, as Raimi successfully brings these visceral emotions to life, shining a light on the cycles of abuse that are personal and systemic at the same time). Buddy’s character plays a seminal role in the end, one which verges on the supernatural, but it is easy to suspend disbelief, as the film is inherently rooted in a grounded, yet fantastical worldview.

Not Getting Credit Where It’s Due 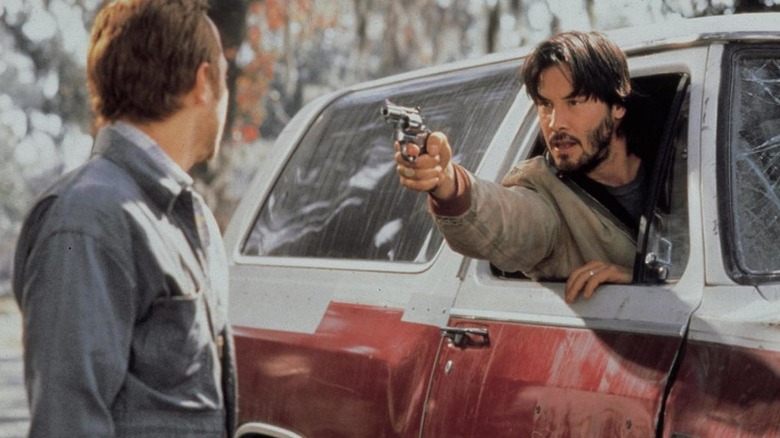 Perhaps, the greatest insult to injury when it comes to “The Gift,” is the 2004 Bollywood rip-off of the plot by director Mahesh Manjrekar, which essentially lifts off Raimi’s narrative scene-by-scene, without officially slapping the “remake” title to the film. I’m talking about the Bipasha Basu-starrer, “Rakht,” which is an uninspired carbon copy of “The Gift,” without the brilliance and nuance, of course.

While it is one thing to be inspired by a plot and introduce unique elements to make it one’s own, Manjrekar settles for a beat-by-beat recreation (down to the imagery of the visions that the protagonist experiences) and completely eliminates the psychological depth of the original. The commentary of patriarchal abuse, which both men and women are subject to in society, is nonexistent in the Bollywood rip-off, which is a great disservice to Raimi’s vision, and what “The Gift” actually stands for.

Circling back to why “The Gift” deserves more recognition, it is important to acknowledge certain elements that are an integral part of Annie’s unfolding story. Being clairvoyant is a double-edged sword: while people flock to her with the hope that she will provide answers or solutions to their layered issues, the townsfolk are quick to turn on her when she (against her will) becomes involved in Jessica’s disappearance case. After she has a vision of the whereabouts of Jessica’s body, Annie is ridiculed by the defense attorney and the jury, labeled a “witch” and a “satanist” by Donnie and his friends.

Annie is constantly harassed throughout the film, simply for the fact that she is kind-hearted enough to care about others, which is further insight into the pointedly different attitudes towards men and women. It is common knowledge that Donnie physically abuses his wife, and does not even bother hiding it, but the reaction of the townsfolk cannot be less indifferent — Donnie is under fire only after Jessica’s mangled body is found in his pond — meaning that only an extreme act like murder can push the law to hold abusive men like him legally and socially accountable.

Sam Raimi, A Master Of Horror

Everything, from Annie’s intuition to her visions, and her psychic revelations about Jessica’s murder, are tinted with the paranormal, and this is where Raimi shines the best, marking the best aspects of the film. The mystery is gripping from start to finish, of course — there’s a twist within a twist towards the end, both mundane and supernatural, and there are many players in the game with twisted, covert intentions. However, there are some unforgettable scenes in “The Gift,” all of which are either dream sequences or visions.

In one particular sequence, Annie fills her bathtub with water, and comes back to find the living room flooded; on opening the bathroom door, she sees the animated corpse of Jessica, deathly pale and wrapped in chains, yelling “f*** you!” at her. The execution of these scenes, including the tone in which a leaking faucet drips blood, and the constantly evolving nature of Annie’s visions, are pure Raimi brilliance, minus over-the-top gore or camp, making them genuinely unsettling. The true horror, of course, is what humans do to one another, especially how men treat women and expect to get away with it, but Annie’s terrifying predicament can be summed up via this quote from Anne Carson’s “Cassandra Float Can” :

” What is it like to be a prophet? Everywhere Cassandra ran, she found she was already there.”

This is true for Annie, a woman already wracked with pain, with a gift wielded against her, and her dreams, visions, and latent abilities coming to choke her (often, literally), while most of the people around her are both terrified of and gravitated towards her personal agency. In this day and age, in cinema, we have plenty of female characters who are complex, flawed, and drive the plot single-handedly, but Raimi’s “The Gift,” a 2000s-era thriller, embodies this element with great skill and proficiency. Moreover, after the horrors she experienced, she heals, reminded by a character that she could continue to do what she does, as she truly has a gift, and is “the soul of the town.” Talk about reclaiming personal power, I love to see it.

Besides the obvious reasons why you should absolutely check out “The Gift” whenever you can, the film also has brief, yet great performances by J.K.Simmons and Rosemary Harris, who later starred in Raimi’s Spider-Man, playing the roles of J. Jonah Jameson and Aunt May respectively. There’s also a pretty cool “Evil Dead” Easter egg in the film that I will not elaborate on, so you folks can discover it yourselves. In short, “The Gift” is recommended viewing and an important film within Raimi’s filmography that is worth consideration.

‘Slash Film: The Daily Stream: Crush Is The Sapphic Rom-Com Of Your Teen Dreams’