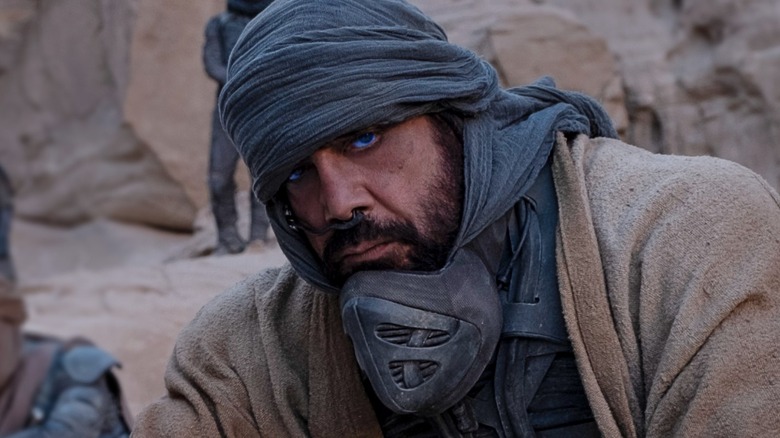 Once upon a time, Javier Bardem was set to inhabit the role Boris Karloff made famous in 1931 and play Frankenstein’s monster in the creature-feature-IP-aggregating franchise “Dark Universe”. Universal Pictures famously photoshopped together Bardem, Russell Crowe, Tom Cruise, Johnny Depp, and Sofia Boutella into the same room in a promo image for said Dark Universe.

The cast was all assembled, with Depp set to play the Invisible Man, Crowe playing both Dr. Jekyll and Mr. Hyde, and Cruise and Boutella ready to lead the way with “The Mummy.” Universal also released a video highlighting the legacy of its classic monsters and revealing a musical theme by Danny Elfman and the official Dark Universe logo, with the studio’s globe blacked out to resemble an eclipse.

Then, in 2017, “The Mummy” released and it turned out to be a critical misfire with lukewarm box office returns. Universal scuttled its Dark Universe plans in favor of standalone movies like Leigh Whannell’s lower-budget “The Invisible Man,” with Oliver Jackson-Cohen playing the titular role as a villain rather than a protagonist. However, that doesn’t mean Bardem wouldn’t still be keen to play Frankenstein’s monster. When asked about his attachment to the role, he told Sirius XM (via Bloody Disgusting):

Of Monsters And Shared Universes

In the video clip above you can see the full context of Bardem’s remarks, straight from the horse’s mouth. It’s worth watching if only for the part where he says that the only other actor he can envision with screws in his head (as Frankenstein’s monster, not generally) would be Bardem’s “No Country for Old Men” and “Dune” co-star, Josh Brolin.

Dark Universe was the classic case of Hollywood putting the cart before the horse. With the success of the Marvel Cinematic Universe, every movie studio and their grandmother was looking to build an interconnected shared universe of franchise films. It hasn’t panned out well for most studios, but they’ve certainly given it the old college try, and some of them — like Legendary with its MonsterVerse — have at least managed to not totally fumble the ball.

Keeping in mind that the MCU only began as a post-credits tease — which could have easily been left at that had the movie not done well — it was probably a bit presumptuous for Universal to announce Dark Universe even before “The Mummy” hit theaters.

If and when a new “Frankenstein” movie does come together, Bardem still might make a good monster. We’ve already seen him play other monstrous characters, like Raoul Silva in “Skyfall” and Anton Chigurh in the aforementioned “No Country for Old Men.” He could even maybe pull off a dual role as both the monster and Victor Frankenstein, the scientist who creates him (in the 2011 stage adaptation, Benedict Cumberbatch and Jonny Lee Miller alternated the two main roles). However, downplaying the shared universe aspect of its movies helped DC get its act together, and Universal has a good start on that, too, with “The Invisible Man.” So it’s probably better if they save the thought of a big monster-mash crossover for later.

Read this next: The Entire Conjuring Universe Timeline Explained

‘Coming Soon: Report: The Last of Us Remake Is ‘Nearly Finished,’ Could Release in 2022’