Last year, the comedy publishing pioneer MAD Magazine announced that it would no longer be publishing new, original issues. After 67 years in publication, DC Entertainment started to distribute MAD Magazine with previously published material, making it only available in comic book shops instead of various newsstands. However, two of MAD Magazine‘s most talented contributors are teaming up to bring back one of the most beloved parts of the publication in the form of a new book.

When MAD Magazine switched to reprinted content, one of the first things to go were the movie and TV parodies featuring incredible caricature artwork by Tom Richmond and jokers written by Desmond Devlin. Thankfully, the two are hoping to keep the parodies alive in the form of a new book called Claptrap, which will be full of original spreads with all-new illustrations and gags. But the only way they can pull it off is through crowdfunding, so they need your help to make it happen.

Here’s the description of the book that Tom Richmond and Desmond Devlin are trying to get off the ground:

The book is called Claptrap, and it will be a hardcover, full-color collection of at least ten parodies of movies in the classic tradition… with a little 21st-century twist. We’ve already completed the first spoof, the subject being Star Wars: The Rise of Skywalker. MAD had published parodies of all of the previous eight Star Wars trilogy films, so we thought the spoof saga needed completion. We’ll be doing parodies of both new movies and a number of films that never got spoofed in MAD for whatever reason, but are well known, critically acclaimed, or cult classics today.

For a taste of what’s to come, here’s their parody of Star Wars: The Rise of Skywalker (see it in high-res here): 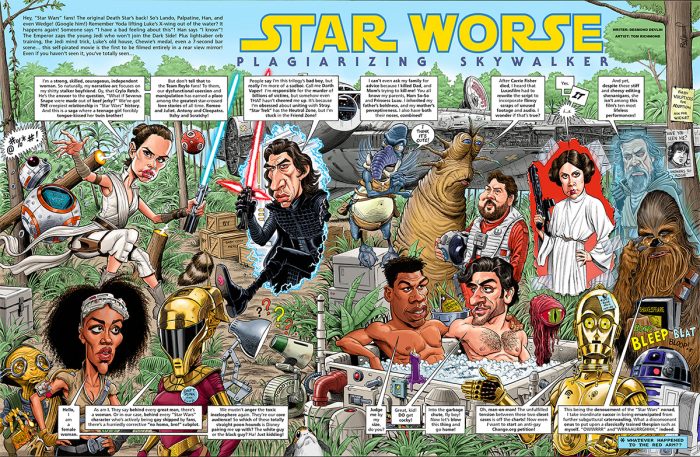 On top of the full film spreads for at least 10 movies, they’ll also have some shorter gag features, also film-related. They’re already hard at work on their second parody, which they intend to reveal when they’re roughly halfway through their Indiegogo campaign. But they won’t reveal the full list of movies for awhile, partly to keep the suspense going, and partly because they haven’t yet finalized the full list. But when all is said and done, it will be a nearly 100-page, full-color book.

If you want to see Claptrap become a reality, be sure to contribute to their Indiegogo campaign over here, which needs $45,000 in order to move forward. If you contribute $25, you’ll get your own copy of the hardcover book when it’s finished and ready to go. If you contribute $500, you can have a caricature of yourself drawn into the book. And there are other bonuses depending on how much you contribute.

This is a fantastic way to keep the spirit of MAD Magazine alive by bringing back one of the most beloved parts of the publication. It’s a consolation prize for the magazine effectively coming to an end, but we’ll take what we can get. Get more information on Claptrap right here.

If the shoe doesn’t fit, must we change the foot?