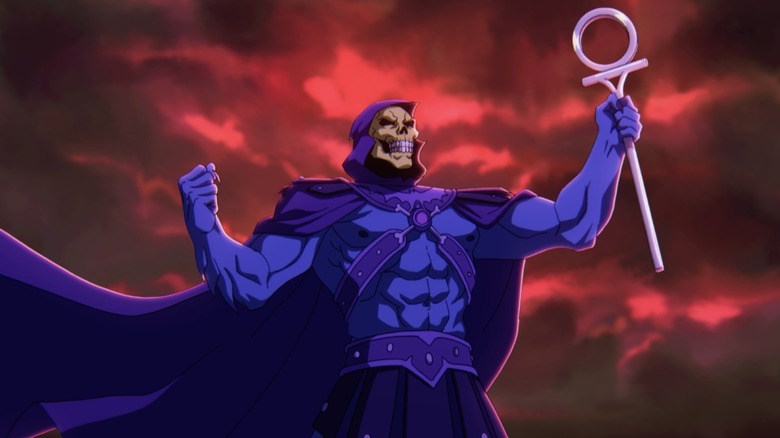 When the new continuation of “He-Man and the Masters of the Universe” dropped on Netflix earlier this year in the form of “Masters of the Universe: Revelation,” the series received critical praise, nostalgic joy, and fanboy outrage. But one thing that remained universal was the acclaim for actor Mark Hamill and his gleefully zealous performance as one of the most memorable cartoon supervillains of all time: Skeletor.

Netflix seems keenly aware of this because they’re putting the “Force Awakens” actor front and center on the hype train, on the eve of the arrival of the series’ conclusion this week. Through their Netflix Geeked account, the streaming service tweeted out some behind-the-scenes holiday treats to its followers on Monday. The sound of Hamill screeching, “…of transcendent triumph!” should be added to the Voyager Golden Record for posterity. Check it out below:

The caption reads: “Welcome to the Master Class. please join in as we witness two acting legends — Mark Hamill and Lena Headey — work out a scene from Masters of the Universe: Revelations – Part 2, streaming TOMORROW ☠️ ⚡️”

Here is the synopsis for Part 2 of “Masters of the Universe: Revelation”:

The war for Eternia continues in the second part of “Masters of the Universe: Revelation,” an innovative and action-packed animated series that picks up where the iconic characters left off. With Skeletor now wielding the Sword of Power, the weary heroes of Eternia must band together to fight back against the forces of evil in a thrilling and epic conclusion to the two-part series.

Masters Of The Universe: Revelation Trailer

“Masters of the Universe: Revelation” is the next evolution of the original “He-Man” animated series of the ’80s. Written by Kevin Smith and starring Hamill as the main antagonist, Skeletor, the new series has five episodes and also stars Lena Headey voicing his baddie Evil-Lyn. Rounding out the rest of the cast is Chris Wood as He-Man, Sarah Michelle Gellar as Teela, Tiffany Smith as Andra, and Liam Cunningham as Duncan, the Man-At-Arms. More guest voices are expected to appear.

Part 2 is expected to pick up where most Part 2’s do: where the events of Part 1 left us last. Episodes six through 10 will have Hamill and Headey reprising their roles of Skeletor and Evil-Lyn, respectively.

Fans already worship Hamill and have since 1978 for his work in the “Star Wars” franchise, and further on for his voice acting work on animated shows and in video games. He was previously known for providing the shrill rasp of The Joker in an array of Batman-centric media, most notably “Batman: The Animated Series,” and currently voices the character Art Rosenbaum (a tailor to the superheroes, like Disney-Pixar’s Edna Mode) on Robert Kirkman’s “Invincible” series on Amazon.

Part 2 of “Masters of the Universe: Revelation” will arrive on Netflix on November 23, 2021.

Read this next: The 25 Best Kids’ Movies Of All Time

The post Mark Hamill and Lena Headey Are Masters Of Acting In This Behind-The-Scenes Clip From Masters of the Universe: Revelations Part 2 appeared first on /Film.

/Film – ‘Slash Film: Mark Hamill And Lena Headey Are Masters Of Acting In This Behind-The-Scenes Clip From Masters Of The Universe: Revelations Part 2’
Author: Anya Stanley
Go to Source
November 23, 2021

‘Slash Film: The Matrix Resurrections Poster Takes Us Back To The Source’

‘Slash Film: The Interesting Reason Everything In Ozark Is So Blue’