Disney+ is bringing Monsters Inc. back in a new way with the sequel series Monsters at Work. After being in development for a couple years, we finally have word that the series will arrive this July. But that’s not all, because Disney+ has also released a look at some new monsters from the series, and a new cast member reporting for duty.

Monsters at Work picks up the day after Monsters Inc. started harvesting the laughter of children instead of scaring them and using their screams to power Monstropolis. Billy Crystal and John Goodman are returning as monster buddies Mike and Sulley, and they’ll be joined by Mindy Kaling (The Office) as a new character. Find out who she’s playing and get a glimpse at some of the new characters below.

On the left we have the show’s main character, Tylor Tuskmon, an eager young monster who graduated top of his class at Monsters University. Ben Feldman (Superstore) is voicing the character who will have to get used to the new business plan at Monsters Inc. after preparing his whole life to scare children.

In the middle is Mindy Kaling’s character Val Little, described as an enthusiastic member of the Monsters, Inc. Facilities Team (aka “MIFT”). Joining her will be Henry Winkler (Barry) as Fritz, the scatter-brained MIFT boss monster pictured on the right.

Not pictured is Ms. Flint, the character played by Bonnie Hunt (Jumanji) in the original movie. She was originally in charge of training new Scarers at Monsters Inc., but now she’ll be in charge of recruiting and training the funniest monsters to become Jokesters. 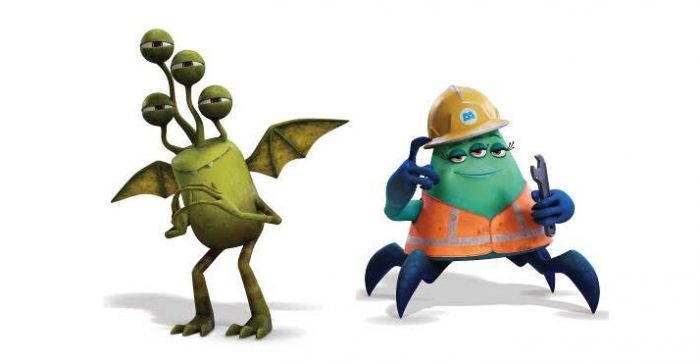 Finally, here’s a look at the updated versions of Sulley and Mike, who look even better than they did in 2001: 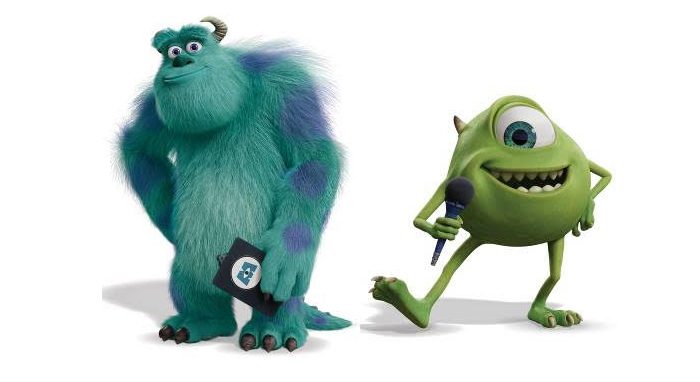 Below is the official synopsis for Monsters at Work, which is coming to Disney+ starting on July 2, 2021.

Monsters At Work” takes place the day after the Monsters, Incorporated power plant started harvesting the laughter of children to fuel the city of Monstropolis, thanks to Mike and Sulley’s discovery that laughter generates ten times more energy than screams. It follows the story of Tylor Tuskmon, an eager young monster who graduated top of his class at Monsters University and always dreamed of becoming a Scarer until he lands a job at Monsters, Incorporated, and discovers that scaring is out and laughter is in. After Tylor is temporarily reassigned to the Monsters, Inc. Facilities Team (MIFT), he must work alongside a misfit bunch of mechanics while setting his sights on becoming a Jokester.

Monsters at Work is executive produced by Disney animation veteran Bobs Gannaway (Mickey Mouse Clubhouse) and produced by Sean Lurie (Inner Workings). Kat Good (Big Hero 6: The Series) and Steve Anderson (Meet the Robinsons) serve as supervising directors, and the late Rob Gibbs served as director on some of the earlier episodes in the series.