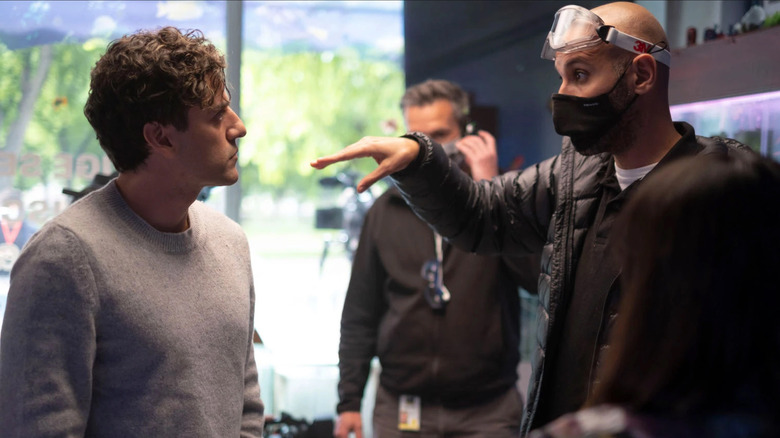 “Moon Knight” has come to an end, at least for now. The season finale arrived earlier this week, and director Mohamed Diab sent the unique superhero story out with a bang by not only introducing a third personality to wreak havoc on the lives of Marc Spector and Steven Grant (both played by Oscar Isaac) but also a new superhero in the form of Layla El-Faouly (May Calamawy) as Scarlet Scarab.

For this week’s finale, /Film was pleased to speak with Mohamed Diab on everything that went into the finale, from designing Scarlet Scarab’s costume to planning out that big final action sequence. Diab also talked about his hopes for what he hopes to see from Moon Knight and Scarlet Scarab in the future, and just how terrifying the new identity of Jake Lockley was when Oscar Isaac unleashed him on set. Check out our full interview below, but beware of major spoilers for the “Moon Knight” finale.

‘You Don’t Know How Important This Is For Egyptians’ 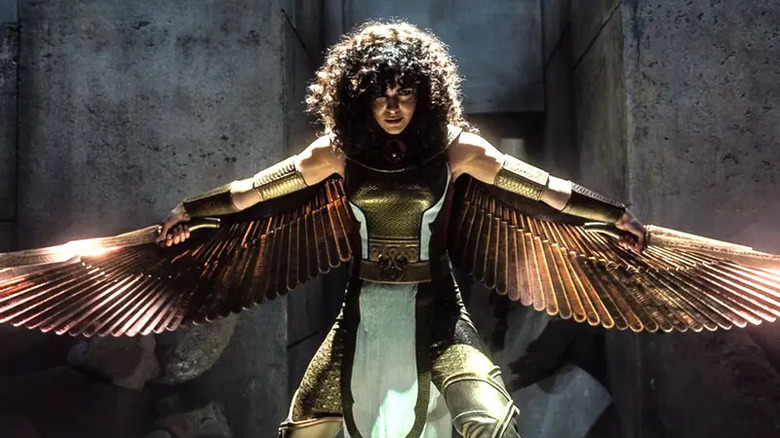 All right, let’s talk about introducing the first Egyptian superhero in the MCU. How exciting was that for you?

You don’t know how important this is for Egyptians. I want to just start by saying thank you for the writers for coming up with the idea of making Layla an Egyptian. When me and [producer] Sarah [Goher] came in as Egyptians, we helped develop the character. And then when May [Calamawy] came, she helped develop the character for sure. The icing on the cake was her being a superhero. We knew that this is going to be a historical moment.

For Egyptians, you don’t know how they’re dealing with the show. There’s a feeling of national pride. People from the third world countries, they feel like the west is so superior. And in a way, a lot of people feel culturally defeated. So they don’t imagine themselves that they can direct or be on a national international stage. To have Egyptians behind camera and in front of the camera, having the Egyptian music involved and seeing that everyone in the world is loving it, having an Egyptian composer, an Egyptian editor, and then having an Egyptian girl who embodies real woman are strong and fierce, not submissive, and eventually becoming a superhero — it’s huge. You don’t know.

My daughter, when she was five, for example, she wanted to straighten her curly hair. She looked beautiful, but she never felt that there is anyone who looks like her in Disney movies and cartoons. But today, she can look at May and feel, “You know what? She looks beautiful and she’s a superhero. And I want to be like her.” I think next Halloween in the Middle East, there’s only going to be one costume. There’s going to be, for every girl, it’s going to be Scarlet Scarab.

Since you mentioned the costume, how much input did you have as far as the design goes? It feels like there’s a little bit of influence of the way Scarlet Scarab looks in Marvel Comics, but obviously, since that version of the character is a man, it had to be much different.

I was lucky that anything you see on the screen […] anything you see is a collaboration between all of us. But one of the best things about that costume was there was no reference. We started with the costume that looked a bit Arabic, culturally, but I felt she should look ancient Egyptian. I love Isis. We had a design for the goddess Isis, and I felt it was the most fantastic costume. She wasn’t like a superhero, but she looked like a goddess. I kept asking the designers to keep stealing from it until they turned her, with that beautiful wing[span], into one of the most beautiful superheroes, in my opinion. I love the way she looks. I have to thank the designers, have to thank Megan Casperlik, our incredible costume designer for creating all those great costumes, and everyone in our show loves all the costumes. They’re fantastic. And they were hard to implement, by the way.

‘I Always Love The Fluid Camera’ 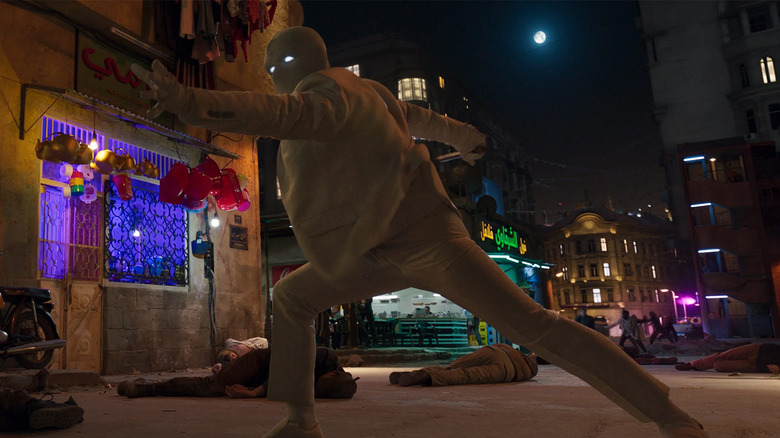 Speaking of collaboration, what’s the development process like for creating those distinctive shots that we see during the action sequences? During that fight in the middle of the street with both Marc and Steven and Layla fighting Harrow in the street, there are a lot of cool single take shots with fast-paced choreography. And then you have that moment when Steven’s Mr. Knight throws the weapon at Harrow, and he knocks it back and it flies back into Marc’s hands. What’s that the development process like working with your crew and figuring out how to plan those sequences?

It’s such a collaborative work, and it takes months to design a good action sequence. You start by the page, what’s written on the page, it always starts with the writers. And then you take that interpretation and talk to an artist who draws the scene. Then we start moving it in previz. It turns into a cartoon action sequence, and you start directing it again. For me, I always love the fluid camera. So I like to minimize the cuts as much as possible. You present it to Marvel, and everyone has an input until we find a middle ground where all of us are happy with it. And that’s what happened.

The final action sequence, we kept discussing it for maybe eight months back and forth, back and forth, with the gods getting bigger or not. We were supposed to shoot the whole action sequence in the beginning inside the Chamber of the Gods, everything in the final episode. But Cairo at night, it’s so beautiful. We should see it at night. We saw it at day[time] in episode 3, we should see more of Cairo, and everyone agreed. And that’s what we did.

I’m curious, because the gods grow to such huge heights, is that something that the people of Cairo can see, or is that something that is only seen by Marc/Steven, Harrow, and Layla. It seems like it’s almost on a different plane of existence in a way. Or is it like watching Godzilla versus Kong in front of you?

Right now, because we don’t have any reaction from the people, I think they don’t see them. At some point, we thought about people seeing them, but we cut it at the end. We decided that people are not going to see them.

That makes sense. Did you use motion capture for the gods? Or is that all strictly computer animation?

Not computer animation by itself. No, we always had two artists. There’s an actor on board. Who’s moving and acting, great actors. For Khonshu, we had Karim El-Hakim; for Tawaret, we had Antonia Salib; and for Ammit, we had Sophia al-Asir. So three great actors, and we really meticulously picked them, because you needed to interact with the actors and give the feeling. Each one of them, you feel the animation is part of their character. Then we had voice actors. Antonia Salib played her voice because from the get-go, she felt like Tawaret. Then we wanted to make [the gods] older in a way. So we went with F. Murray Abraham, who immediately made the character into his own. And we had the great Saba Mubarak, a very famous Jordanian-Egyptian actress, playing Ammit. 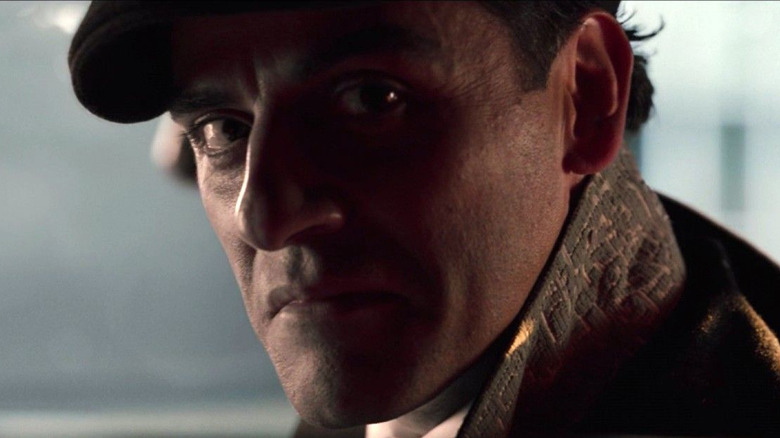 First of all, I know for a fact that they’re so interesting that Marvel is going to use them one day again. I see how fans are loving them, but I just don’t know what’s going to happen. I’m kept in the dark. So I don’t know what’s going to actually happen. If you ask me, I just wish they interact with as many superheroes as possible. I want them to drive them crazy. I want to see Tawaret and Layla, with the two of them [having] completely different characters, how Tawaret is going to drive Layla crazy, convincing her or not convincing her to continue being a superhero. Oscar had this idea of partnering up with the Hulk, because the Hulk has two [personalities]. So both of them could drive each other crazy. Very interesting. Partnering him up with any character is very interesting. I would love to do that one day.

Obviously Oscar has been managing Marc and Steven throughout the series, but we finally meet Jake Lockley at the end of this episode. Did you have conversations with Oscar about the influences on that character, as far as like how he crafted it. Were any specific pop culture touchstones that influenced the creation of that personalty?

We never spoke about Jake that much, honestly, but I want to tell you, when Oscar just showed us the way he wanted to play him, he scared the hell out of us. He became a scary person for sure. I think the discussion about Jake is going to come one day, if there is an expansion of what’s going to happen. We actually decided to meet him at the end, so we don’t do this disservice to him, because he needs exactly the same time as Marc and Steven on screen. We need to understand who he is. We need to understand his struggle, but he’s one of the reasons that I really want to come back one day to this show and expand that world, whether in film or TV. But I see him as the “Taxi Driver” kind of guy. So I wish one day to play with him and see where it takes us.

Every episode of “Moon Knight” is streaming now on Disney+.

‘Sons of the Forest’ Steam Page Appears With New Details