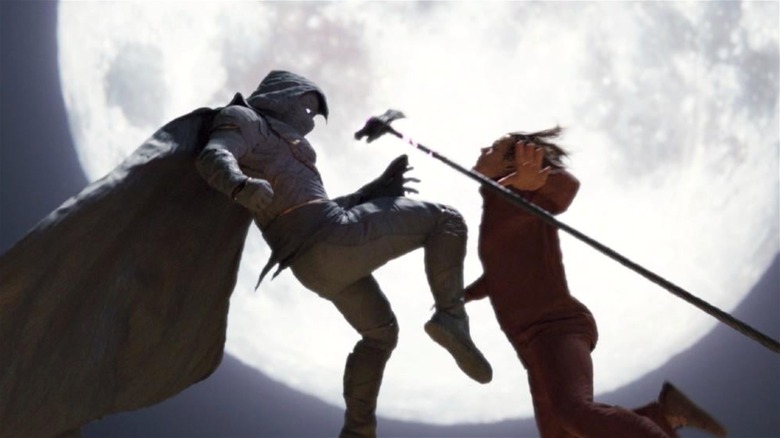 Is he gliding through the air, oh wait — is he actually flying? This was my knee-jerk reaction to seeing Moon Knight (Oscar Isaac) fly his way to Cairo (with Khonshu’s aid) in the season finale of the recently-wrapped Disney+ show. Moon Knight, as a character, has always been one full of surprises — as the character has not been an integral part of the popular consciousness until now — allowing great leeway for the extent of his powers, courtesy of being the Fist of Khonshu.

However, “Moon Knight” head writer Jeremy Slater clarified to ComicBook.com that the superhero was technically not flying, in the general sense of the term, but “riding this sort of air current at 200 miles an hour.” Sounds a bit like flying to me, but Slater explains the difference between Moon Knight’s flight and that of another superhero, like Captain Marvel:

“God, again, I’m not a 100% sure [about Moon Knight flying] because in the script it was, he was using his cape as a sort of parasail. And Khonshu was like, ‘I’m the God of the night skies.’ And the idea in the script was that Khonshu summons up this incredible sort of jet stream of air, and he catches that. And he’s riding this sort of air current at 200 miles an hour towards Cairo. Clearly, it was sort of visualized a slightly different way in the show. So I think it’s a little bit up in the air. I don’t think he can necessarily fly like Captain Marvel.”

Legit flying or not, the sequence, especially when his cape takes on the crescent moon shape and is interposed with the actual moon, is pretty badass.

‘Moon Knight Is Much Stronger Than People Give Him Credit For’ 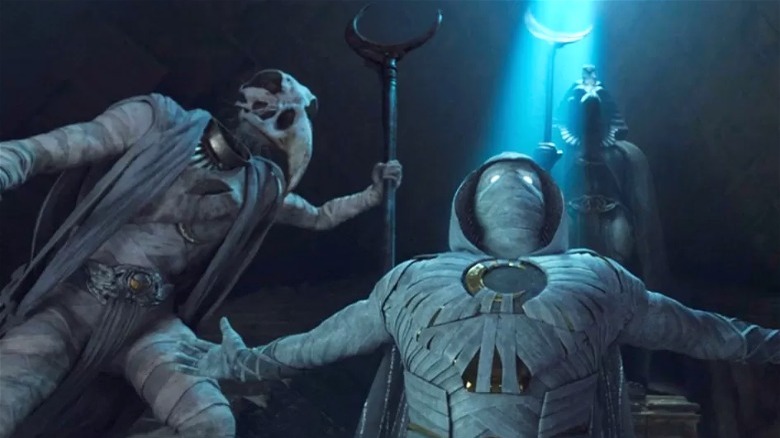 Marc Spector is a deadly mercenary, skilled in an array of combat skills, which he uses to beat up his enemies. In the comics, his power fluctuates as per the four phases of the moon — while this aspect has not been explored in the “Moon Knight” show (yet), it offers a greater glimpse into Marc’s psyche and his alters. While he does not possess overt supernatural abilities like X-Ray vision or mind manipulation, Khonshu’s powers make him resistant to potentially life-threatening attacks and scenarios.

As Moon Knight’s abilities are still evolving, and there is much room for interpretation, Slater clarified that while he was not technically flying, the full extent of Khonshu’s blessings remains unknown at the moment:

“But look, we’ve seen that when he is channeling Khonshu’s power, he can do some pretty crazy stuff. And I don’t necessarily know if we know what the ceiling for that power level is just yet. He may be way stronger than any of us know or suspect, that the Khonshu Wars run in Jason Aaron’s Avengers, he kicks all the Avengers’ ass. Moon Knight is much stronger than people have given him credit for in the past. And that’s now canon. So I think it gives us a lot of leeway to level him up or down as the story dictates in the future.”

This is true, as evidenced in the recent Marvel Comic run, “Moon Knight #1,” in which he emerges as a deadly vigilante figure unafraid to remind other supernatural creatures that he will always be there to protect the innocent and maim those who abuse their powers. The scenes in which he terrorizes a group of vampires in a van are absolutely brutal, and these undead beings seem pretty scared of the man in the white (well, off-white) cape.

All episodes of “Moon Knight” are currently streaming on Disney+.

‘Slash Film: The 20 Best Seasons Of The Simpsons Ranked’