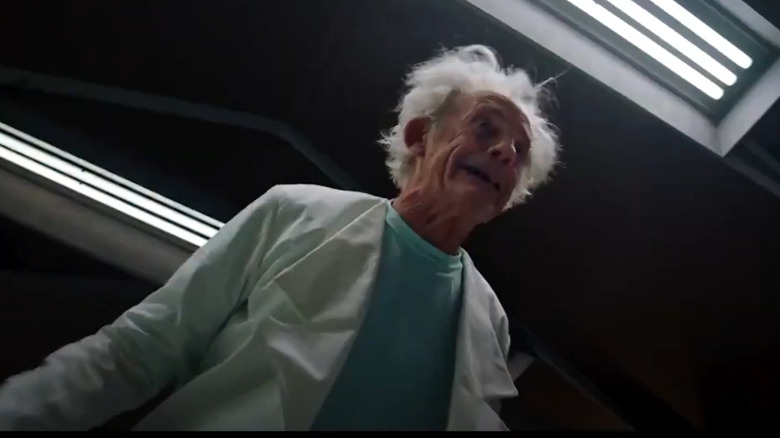 The fifth season of Adult Swim’s hit animated series “Rick and Morty” just finished, coinciding with the programming block’s 20th anniversary. (That’s right, Adult Swim is almost old enough to buy a six-pack.) To celebrate and hype up the finale, they released a quick live-action promo of mad scientist Rick and his hapless grandson Morty, played by none other than “Back to the Future” star Christopher Lloyd and “It” franchise star Jaeden Martell, respectively. The casting was perfect, as Lloyd’s Doc Brown was series creator Justin Roiland’s inspiration for Rick.

Adult Swim has released two more brief promos, each featuring the live-action Rick and Morty in a reference to their cartoon hijinks. Check them out below!

The first of the two new promos is captioned “C-1.21”, which isn’t one of the canon universes in the animated series. Instead, it’s a reference to Lloyd’s character in “Back to the Future”, who declares that 1.21 Gigawatts of electricity are needed to power the flux capacitor and travel through time. While it’s looking less and less likely that a “Back to the Future 4” will happen, seeing Lloyd play a character inspired by Doc Brown is pure joy.

The clip riffs on the “Rick and Morty” season 3 episode where Rick turns himself into a pickle in an attempt to get out of going to family therapy. Live-action Morty thinks Rick has turned himself into a pickle again, but is surprised when a very human-looking Rick takes a healthy bite out of that crisp cucumber.

The second of the new promos is captioned “C-132”, which is the origin universe for the animated Rick Sanchez and Morty Smith. (They are no longer in that timeline due to accidentally turning all of its inhabitants into Cronenberg monsters, but that’s another story.) The promo re-creates the final moments of the pilot episode: Rick excitedly babbles at a prone, paralyzed Morty about their future together. “Rick and Morty forever, forever a hundred years, Rick and Morty dot com!” he rants between belches and gurgles.

There’s no telling exactly when we’ll see season six of “Rick and Morty”, though we do know there’s a spin-off series headed our way. There’s also no telling whether or not we’ll see more of Lloyd and Martell and their live-action incarnations anytime soon, though it’s possible. After all, “Rick and Morty” will go on forever, forever a hundred years, Rick and Morty dot com.

Read this next: The Perfect Live-Action Rick And Morty Were Just Introduced By Adult Swim

The post More Live-Action Rick and Morty Segments Reveal an Alternate Take on This Twisted Universe appeared first on /Film.