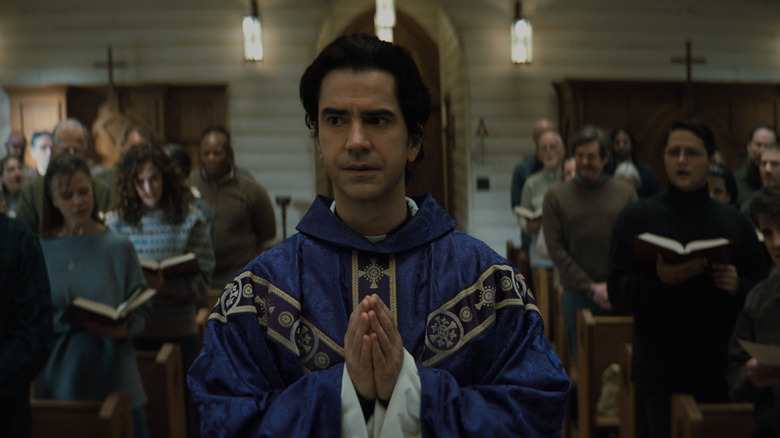 It’s September, which means it is now officially Halloween season. Yes, Halloween isn’t until the end of October, but let’s get real: September is the true start of all-things-spooky. Netflix knows this, so they’re getting into the spirit by revealing their Netflix and Chills 2021 line-up – that is, all the horror-related material (including family-friendly stuff) that will be dropping on the streaming service between now and Halloween. The list of titles includes some classics, but there’s a lot of new stuff here, too. Perhaps the most interesting (if that’s the word you want to use) entry is something called “Escape the Undertaker,” which is described as an “interactive film featuring WWE Superstars.” One of those SUperstars is – you guessed it – The Undertaker. Learn more about that, and the rest of the titles, below. And Happy Halloween. 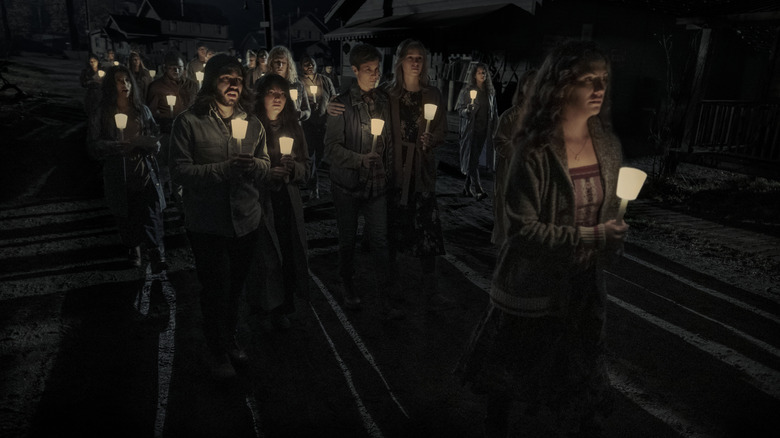 Into the Night: Season 1 — NETFLIX ORIGINAL

This is it, the final season of Lucifer. For real this time. The devil himself has become God… almost. Why is he hesitating? And as the world starts to unravel without a God, what will he do in response? Join us as we say a bittersweet goodbye to Lucifer, Chloe, Amenadiel, Maze, Linda, Ella and Dan. Bring tissues.

On his bachelor party weekend, Roman, his brother Albert and their friends go on a hiking trip into the wild. When the group hear gunshots nearby, they attribute them to hunters in the woods. However, they soon find themselves in a desperate bid for survival when they realize that they have fallen prey to a mysterious shooter.

When Alex (Winslow Fegley), a boy obsessed with scary stories, is imprisoned by an evil witch (Krysten Ritter) in her contemporary New York City apartment, he meets Yasmin (Lidya Jewett), who is also trapped there, and learns he must tell a new scary story every night in order to stay alive.

A mysterious invitation to join the game is sent to people at risk who are in dire need of money. 456 participants from all walks of life are locked into a secret location where they play games in order to win 45.6 billion won. Every game is a Korean traditional children’s game such as Red Light, Green Light, but the consequence of losing is death. Who will be the winner, and what is the purpose behind this game.

After a deadly break-in at a couple’s new dream home, the traumatized wife searches for answers — and learns the real danger is just beginning.

From The Haunting of Hill House creator Mike Flanagan, MIDNIGHT MASS tells the tale of a small, isolated island community whose existing divisions are amplified by the return of a disgraced young man (Zach Gilford) and the arrival of a charismatic priest (Hamish Linklater). When Father Paul’s appearance on Crockett Island coincides with unexplained and seemingly miraculous events, a renewed religious fervor takes hold of the community – but do these miracles come at a price?

From the creator of The Killing, The Chestnut Man is set in a quiet suburb of Copenhagen, where the police make a terrible discovery one blustery October morning. A young woman is found brutally murdered in a playground and one of her hands is missing. Next to her lies a small man made of chestnuts. The ambitious young detective Naia Thulin (Danica Curcic) is assigned to the case, along with her new partner, Mark Hess (Mikkel Boe Følsgaard). They soon discover a mysterious piece of evidence on the chestnut man – evidence connecting it to a girl who went missing a year earlier and was presumed dead – the daughter of politician Rosa Hartung (Iben Dorner).

No One Gets Out Alive — NETFLIX FILM

Ambar is an immigrant in search of the American dream, but when she’s forced to take a room in a boarding house, she finds herself in a nightmare she can’t escape. 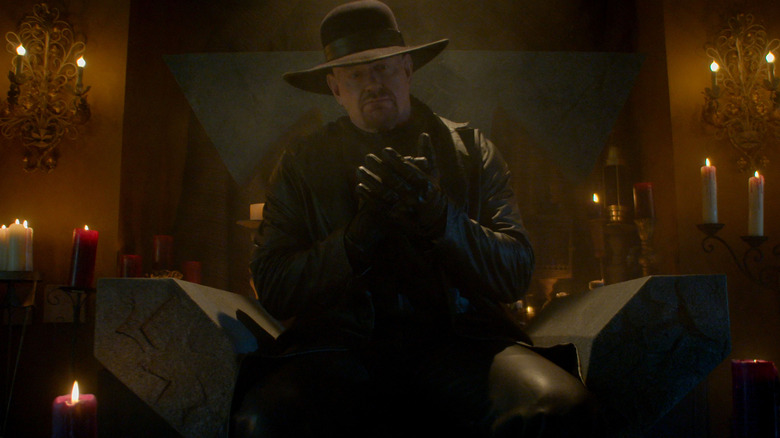 Nobody Sleeps in the Woods Tonight Part 2 — NETFLIX FILM

Nobody Sleeps In The Woods 2 is a continuation of the first Polish slasher film, based on a screenplay by Mirella Zaradkiewicz and Bartosz M. Kowalski, who also directed the film. The main character of the film is Adaś, a young, lonely, unhappy policeman from a small village in Podlasie. Ignored by his colleagues and beautiful and extremely confident Wanessa, the shy boy is looking for his place in the world. In the sequel, we will also learn more about the fate of Zosia, who will show a completely new and surprising face. The film is a perverse, ironic, grotesque and bloody story about looking for love and discovering one’s own self in a world that divides us more than it unites us. It’s a slasher that will turn genre rules upside down this time.

On Willa Ward’s twelfth birthday, she inherits a beautiful charm necklace that belonged to her mother, who was a witch. She soon learns 2 bad witches, Wilma and Wanda are after her locket so they can have ultimate power, and she alongside her best friends Scout and Lily turn into cats to escape. They must learn to use the necklace and her witch powers to defeat the bad witches and save their town.

Are You Afraid of the Dark?: Season 1

In this interactive film featuring WWE Superstars, The Undertaker has set a trap for the decorated tag team The New Day at his mansion. What they don’t know: The Undertaker’s mansion is an extreme Haunted House, packed to the brim with supernatural challenges. It’s up to viewers to decide the fate of these three poor souls trying to survive the wrath of The Undertaker.

There’s Someone Inside Your House — NETFLIX FILM

Makani Young has moved from Hawaii to quiet, small-town Nebraska to live with her grandmother and finish high school, but as the countdown to graduation begins, her classmates are stalked by a killer intent on exposing their darkest secrets to the entire town, terrorizing victims while wearing a life-like mask of their own face. With a mysterious past of her own, Makani and her friends must discover the killer’s identity before they become victims themselves. THERE’S SOMEONE INSIDE YOUR HOUSE is based on Stephanie Perkins’ New York Times best-selling novel of the same name and written for the screen by Henry Gayden (Shazam!), directed by Patrick Brice (Creep) and produced by James Wan’s Atomic Monster (The Conjuring) and Shawn Levy’s 21 Laps (Stranger Things).

Based on the best-selling book series by Adam Gidwitz, the animated series follows Hansel and Gretel as they run away from home to find better parents…or at least ones who won’t chop off their heads! As Hansel and Gretel leave their own story and venture through other classic Grimm fairy tales, unexpected narrators’ guide us through their encounters with witches, warlocks, dragons and even the devil himself. As the siblings roam a forest brimming with menacing foes, they learn the true story behind the famous tales, as well as how to take charge of their destinies and create their own happily ever after. Because once upon a time, fairy tales were awesome.

A young woman lies dying far from home. A boy sits beside her. She is not his mother. He is not her child. Together, they tell a haunting story of broken souls, an invisible threat, and the power and desperation of family. Based on the internationally critically acclaimed novel by Samanta Schweblin.

The Sharkpack gets ready for Halloween with the spooky legend of the “Fearsome Fog” — and Sharkdog must save trick-or-treating from a slimy sea monster!”

In Season 3, Joe and Love, now married and raising their baby, have moved to the balmy Northern California enclave of Madre Linda, where they’re surrounded by privileged tech entrepreneurs, judgmental mommy bloggers and Insta-famous biohackers. Joe is committed to his new role as a husband and dad, but fears Love’s lethal impulsiveness. And then there’s his heart. Could the woman he’s been searching for all this time live right next door? Breaking out of a cage in a basement is one thing. But the prison of a picture-perfect marriage to a woman who’s wise to your tricks? Well, that’ll prove a much more complicated escape.

A college student moonlighting as a chauffeur picks up two mysterious women for a night of party-hopping across LA. But when he uncovers their bloodthirsty intentions — and their dangerous, shadowy underworld — he must fight to stay alive.

A young woman seeking self-improvement enlists the help of a renowned hypnotist, but after a handful of intense sessions, soon discovers unexpected and deadly consequences.

Incident in a Ghostland

Read this next: The Gruesome ‘Evil Dead’ Remake Pauses The Gore For An All-Time Great Jump Scare

The post Netflix and Chills 2021: All the Horror Content Streaming on Netflix This Halloween Season appeared first on /Film.