Netflix’s first anime take on Castlevania ended with the recently released fourth season. But the streaming service isn’t done with the Castlevania just yet. In April, word broke that a Castlevania spin-off was in the works, and now we have even more info on what you can expect from that. The Castlevania spin-off will be set during the French Revolution, and focus on Richter Belmont, a vampire hunter, and descendant of Simon Belmont and Juste Belmont.

Vampires of the French Revolution

I love vampire stories and I really love vampire stories that feature Dracula, but I still haven’t watched the Netflix Castlevania series, because I’m just that pathetic and useless. One of these days I’ll catch up with it, and then I’ll probably move on to the new Castlevania spin-off series. The series was first announced back in April, and today more details arrived. Specifically that the show would feature “Richter Belmont, the [descendant] of Sypha and Trevor, and Maria Renard, set in 1792 France during the French Revolution.”

The French Revolution was a bloody affair, so throwing vampires into the mix makes sense. It’s also an idea I haven’t really seen before. I’m not saying there aren’t other vampire stories set during the French Revolution. I’m just saying I haven’t heard of them, and I always get excited when I hear about something that sounds like a fresh take on a familiar idea.

Back in May, /Film spoke with Castlevania producer Kevin Kolde, who said: “I’ll just say that there are discussions about a new Castlevania series since [the video game franchise] is a rich universe of characters over many many years. We’re excited to explore those other characters and time periods. We’ll have more to say that in the future. That’s really all I can say.”

Who is Richter Belmont?

Richter Belmont is a character straight out of the Castlevania games. He’s a descendant of Simon Belmont and Juste Belmont, as well as Sypha and Trevor, characters who appeared on the Netflix Castlevania show. In the games, he is a renowned vampire hunter and the main protagonist of Castlevania: Rondo of Blood. He’s also appeared as the supporting character in later games.

In Netflix’s initial announcement, they called Richter Belmont the “son of Sypha and Trevor,” only to then update that with this: 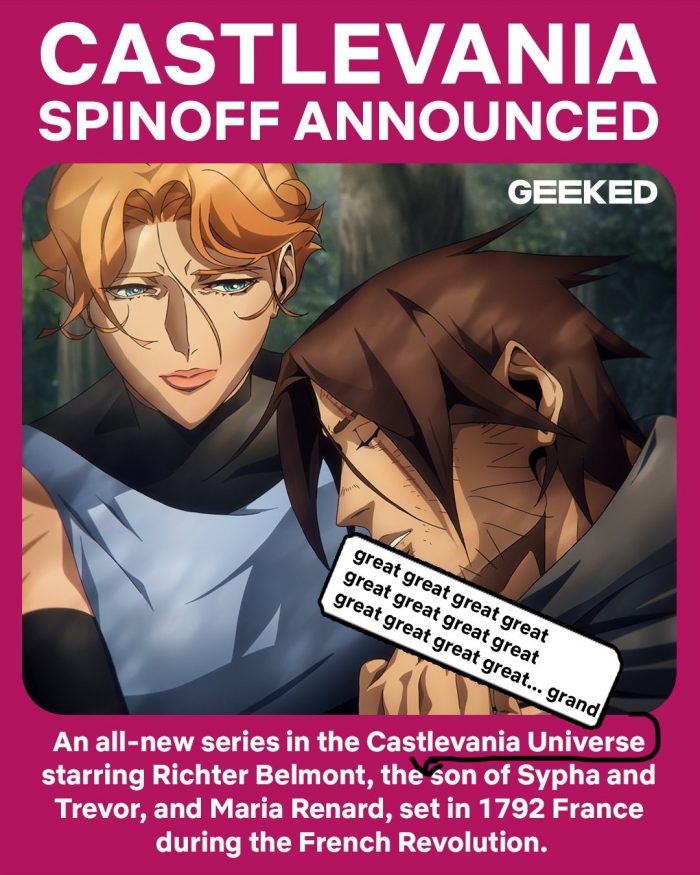 The Castlevania TV series was set in the 14oos, and the French Revolution unfolded between 1789 and 1799, so it makes more sense for the spin-off’s main character to be a later descendant rather than a son. No idea why Netflix didn’t just delete the initial Tweet and resend a corrected version, but I have to work with what they give me, folks.

The post Netflix’s First ‘Castlevania’ Spin-Off Will Be Set During the French Revolution appeared first on /Film.

[Preview] 5 Genre Movies We Can’t Wait to See at the Tribeca Film Festival!