Emma Stone is ready for her close-up as the vampire bat, the inhuman beast, known as Cruella De Vil. The La La Land and Easy A star is getting a little evil by starring in Cruella, where she’ll play a younger version of the dog-napping villain from 101 Dalmatians. The movie is said to be an origin story for the twisted fashionista, and a new poster shows off Emma Stone as the darkly chic character, which we’ll get a much better glimpse of when the first trailer arrives tomorrow. 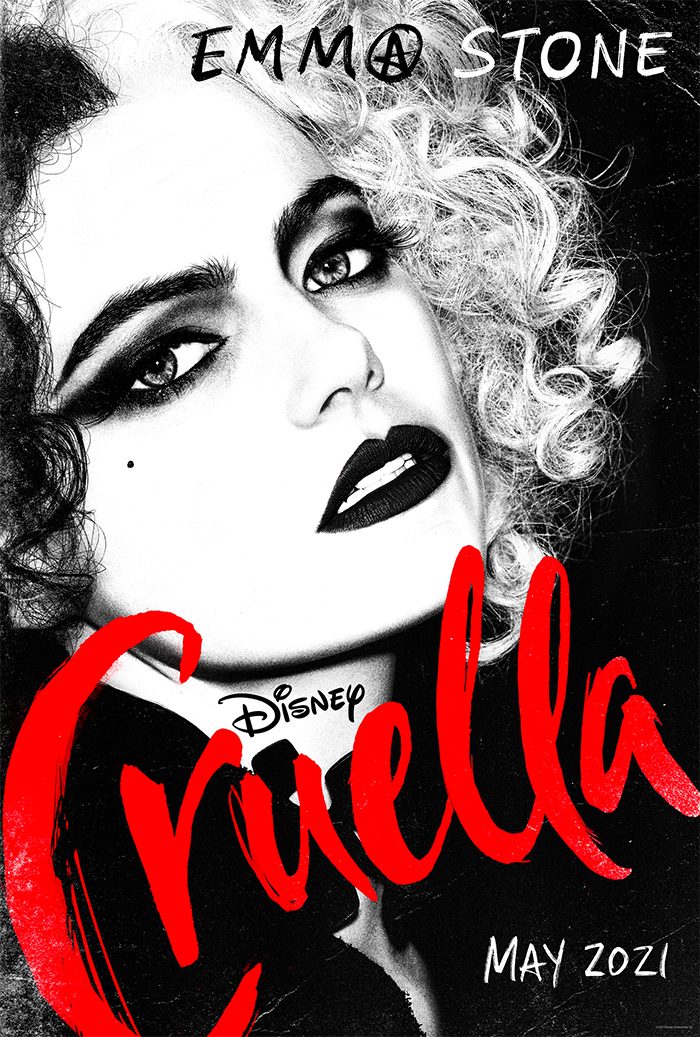 To see her is to take a sudden chill, and now we’re very much looking forward to seeing exactly what this movie will be like. There’s definitely a punk rock vibe about this poster, and the stylized “A” in Emma Stone’s name is an interesting touch. At first, I thought it was intended to symbolize anarchy, but it appears like it could be a pentagram, perhaps denoting Cruella’s evil side.

Our first look at Cruella came from The D23 Expo back in August of 2019, and since then we’ve been waiting patiently for a more significant look at the film. The movie was previously rumored for a possible release on Disney+, but it’s currently set to hit theaters on May 28, 2021. There’s a chance it could end up getting a hybrid release in theaters and on Disney+ Premier Access, but perhaps the studio is waiting to see what the coronavirus pandemic situation is like in a couple months.

Cruella is directed by Craig Gillespie (I, Tonya) and also stars Paul Walter Hauser and Joel Fry as the thieving duo Horace and Jasper, and Emma Thompson and Mark Strong will also have supporting roles in the film. Other than that, we’re still wondering exactly what the movie will be about and how it will introduce us into the woman who will become Cruella De Vil.

Come back tomorrow when the first trailer for Cruella debuts online.

The post New ‘Cruella’ Poster with Emma Stone Will Give You a Sudden Chill Before the First Trailer Arrives Tomorrow appeared first on /Film.

Indie Horror Month 2021: Listen to Horror BFFs Heather Wixson and Patrick Bromley Discuss Their Favorite Indie Horror Movies of the Past Decade, Including EXCISION, WE ARE STILL HERE, and THE LORDS OF SALEM – Daily Dead

Why Mortal Kombat’s Johnny Cage Isn’t In The New Movie, According To The Screenwriter