Chris Rock is best known for being one of the best comedians in the business, but he’ll soon expand his career in a surprising way by starring in the serial killer thriller Spiral: From the Book of Saw, a quasi-reboot of the popular Saw franchise.

Originally intended for release in May of 2020, Spiral: From the Book of Saw is now slated to arrive in May this year due to the coronavirus pandemic delaying a bunch of big Hollywood movies. As we wait to see if the movie’s 2021 release date will remain in place, a new photo and details about the movie have arrived, including talk of a vibe that emulates David Fincher’s masterful Seven.

Empire released this new photo from Spiral: The Book of Saw as part of their (hopefully) 2021 movie preview: 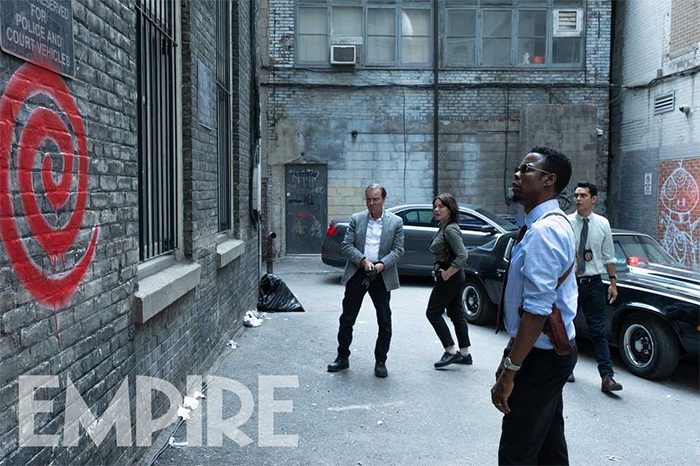 The film finds Chris Rock playing Detective Zeke Banks, who is on the trail of a sadistic serial killer. In the image above, it looks like he and fellow detectives played by Max Minghella and Edie Inksetter have just found the killer’s calling card. Even more bold is that it’s been spray-painted below a sign that indicates parking reserved for police and court vehicles, which means this killer isn’t shy about taunting police in their own backyard.

However, this isn’t just another average psychopath. It sounds like the killer will be leading police on a chase with many references to the events of the Saw movies that came before. Director Darren Lynn Bousman explained:

“Chris came in with a thriller concept. He pitched this very elaborate, dense idea. We wanted it to feel much more like Seven. But it has so many ties to the mythos of Saw.”

Making a comparison to David Fincher’s Seven sets the bar pretty high, especially when this is a movie tied to a franchise with eight films of varying quality (to say the least!). But perhaps this is a clever way of digging into that franchise while doing something completely new with it. For one thing, Bousman says he’s pulling back on the blood and gore that was a staple of the previous installments of the Saw franchise. The director said:

One of the more tiresome aspects of the Saw franchise was undoubtedly the increasingly unrealistic and ridiculous mechanisms and set-ups used to torture and eventually kill Jigsaw’s victims. What started as suspenseful horror turned to eye-rolling boredom.

What also didn’t help the Saw franchise was having every movie try to pull off some kind of twist along the lines of the wild turn from the end of the original Saw. While there will likely be some kind of shocking twist in this movie, hopefully it’s not something nonsensical. Unfortunately, we’ll be waiting a little while to find out, and perhaps even longer since Hollywood may start shifting movies from late spring/early summer release dates due to the continued struggles with the spread of the coronavirus pandemic. In the meantime, you can still watch the first trailer right here.

The post New ‘Spiral: From the Book of Saw’ Photo and Details Tease the Reboot, Which Was Inspired by ‘Seven’ appeared first on /Film.

/Film – ‘Slash Film: New ‘Spiral: From the Book of Saw’ Photo and Details Tease the Reboot, Which Was Inspired by ‘Seven’’
Author: Ethan Anderton
Go to Source
January 21, 2021

‘Slash Film: ‘Hysterical’ Trailer: The Future of Comedy is Female in FX Documentary’