Star Wars fans are eagerly anticipating the arrival of The Book of Boba Fett, a new spin-off series focused around the bounty hunter who made quite the return in The Mandalorian on Disney+. But before we see how the story of Boba Fett continues, Marvel Comics and writer Charles Soule are going to tell a story from his past that fills in the gap between The Empire Strikes Back and Return of the Jedi.

War of the Bounty Hunters is a new five-issue comic book miniseries that will reveal the difficulty that Boba Fett had in delivering Han Solo in carbonite to Jabba the Hutt. Though it might have seemed like the job was easy, it turns out that the bounty hunter had to deal with all sorts of problems as he tried to deliver the slimy gangster his new prize. In fact, at one point he even lost the captured smuggler altogether. Find out more about the new Boba Fett comic book below.

Speaking to StarWars.com, Charles Soule explained that the idea for this story is something that he pitched back in 2019. The writer said, “Boba Fett clearly doesn’t take Han Solo directly to Jabba’s palace. Something had to happen in between that intervening time between Empire and Jedi. And I was like, ‘I would like to tell that story, and I would like it to be about Boba Fett and what happens to him.’”

Here’s a taste of the upcoming War of the Bounty Hunters comic coming later this year: 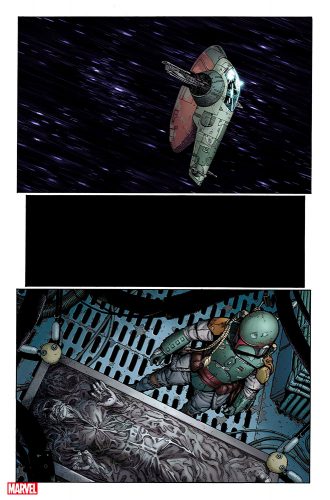 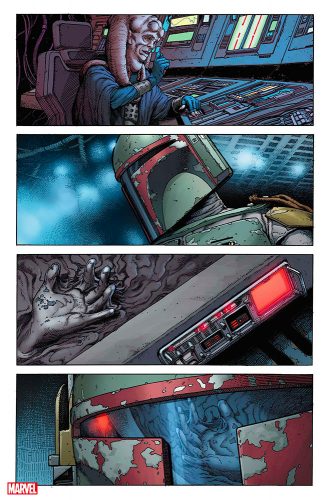 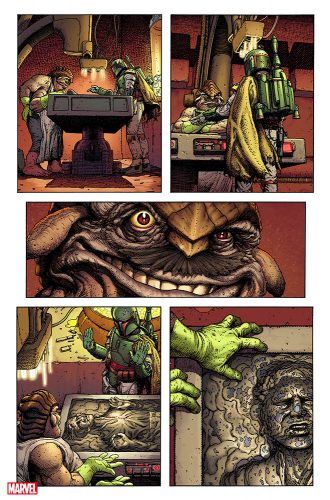 Though we see Boba Fett is still in possession of Han Solo in carbonite in the above panels, it appears that the containment unit in which he’s being held isn’t functioning properly. It might be starting to melt. So Boba Fett takes it to someone who can potentially help him out. Is that Dexter Jettster from Attack of the Clones, or just another husky, mustached alien of the same species?

Anyway, not all goes well for Boba Fett at the start of this comic. Soule explained:

“Boba Fett is in possession of Han Solo at the end of Empire Strikes Back, and at the beginning of War of the Bounty Hunters, he is not. And he is going to do everything he can to get him back, no matter what. No matter who is standing in his way.”

As the title implies, Boba Fett will be dealing with a lot of nefarious characters, and not just bounty hunters. Jabba the Hutt, the crime syndicate Black Sun, and even Darth Vader are involved. Soule says, “It’s basically Boba Fett, by himself, against all of these people.”

War of the Bounty Hunters will begin with an Alpha #1 comic by Soule and artist Steve McNiven on May 5, 2021, and then the five-issue miniseries will run from June through October with artwork by Luke Ross. This will actually act as the introduction to Marvel’s new comic runs that will take place between Empire Strikes Back and Return of the Jedi. The main Star Wars comic, Bounty Hunters, Darth Vader, and Doctor Aphra will all be spun out from this miniseries. Soule added:

“War of the Bounty Hunters is a story about Boba Fett doing his thing, but it builds into something much bigger, and that’s what the best comic crossovers and big stories do. They tell a great story in and of themselves, but they’re also the start of something, and they open a lot of new doors. And this story will absolutely do that.”

Sounds like this will be something fans won’t want to miss.