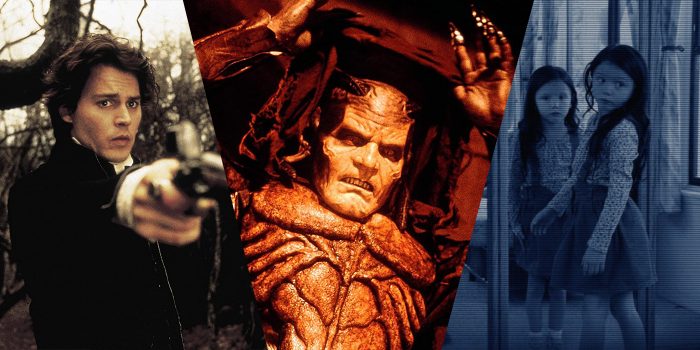 (Welcome to Now Scream This, a column where horror experts Chris Evangelista and Matt Donato tell you what scary, spooky, and spine-tingling movies are streaming and where you can watch them.)

Matt: This week’s “Now Scream This” is a special request, echoed by all our readers who don’t have a Shudder subscription. Or any niche streaming services for that matter (but if you’re a horror fan, splurge for Shudder). By request, Chris and I are keeping this edition to only Netflix, Hulu, and Amazon Prime. The O.G. streamers before Peacock and Disney+ or any of these new services you can’t convince me truthfully exist. Stop making up services. This many can’t possibly compete.

Chris: Yep. Read what Matt said above. I’ve got nothing this week, folks. Bar’s closed.

We Summon The Darkness

Matt: Like I said to start my Fantastic Fest 2019 review, “Alexandra Daddario in a heavy metal horror movie?” Music to my forever-ringing ears due to years of blowout from crunchy amplified guitar riffs. You’ll get your girl-gang tenacity since Daddario and Maddie Hasson shine as leather-clad aggressors in a male-dominated space, but maybe some tides turn. Maybe cultism plays a factor. Maybe Johnny Knoxville pops in. I do wish We Summon The Darkness dedicated itself more ferociously to “heavy metal horror,” but it’s still a not-so-quiet riot. Daddario is as commanding and sinful as you’d hope, expect, and pray for in your genre titles.

Chris: I’ve heard Matt’s praise for this movie before, but I have a very hard time getting past the trailer. Please, make better trailers.

Matt: Now you can watch the summer’s biggest drive-in hit, The Wretched, at home! That’s no sarcastic remark directed at either IFC Midnight’s successful claim to record-breaking box office domination or our current pandemic scenario that cleared the summer blockbuster schedule. Genuinely, The Wretched is a witch tale that might show a few cracks but entails enough doppelgänger terror and child endangerment to score a recommendation. That gangly demonic design of the film’s folklore villain is one hell of a genre look, which earns instant love from a practical effects appreciator like myself—indie spirits, tight execution, and that underlying creep factor that holds in plenty long enough.

Chris: I just received a Blu-ray copy of this, so I will make sure to watch it as soon as I can.

Matt: The Paranormal Activity franchise depreciates the farther you reach (except The Marked Ones owns), with Paranormal Activity 3 notching the final numbered sequel that stills finds fresh and freakish ways to maintain found footage dominance. Need I say more than the oscillating fan scare? A little sheet ghoul that disappears in front of our eyes? It’s the last Paranormal Activity I cared to own on home release and still scratches that in-your-face itch only videotape horror can deliver. If you fell off this franchise after number two, get back on board.

Chris: I know it’s controversial, but I like Paranormal Activity 2 more than 3, but 3 is full of inventive ideas – the camera on an oscillating fan is just swell.

Matt: I listed After Midnight once when it hit Kanopy, but let’s be honest, it’s not one of the most popular streaming services. Welp, now After Midnight is on Amazon Prime. For the masses. When done right, romance and horror are a magnificent two-genre dance, but the steps aren’t easy to maneuver. That’s what makes Jeremy Gardner and Brea Grant’s fight with their inner demons and an actual hellbeast such a graceful bow. Wonderfully raw, expressively impassioned, and I’m going to keep raving about how much I feel the beating heart of this beautiful filmic love letter. Makes my emotions get all fluttery and shit.

Chris: I watched a half-hour of this and then fell asleep. I don’t think it’s the movie’s fault, I’m just a very sleepy man.

Matt: Aquatic horror often relies on sharks or gators or other slippery creatures. Not Christopher Smith’s Triangle! Melissa George gets the type of heavy-lifting leading role she deserves as a mother trapped in an at-sea time loop. Her ship capsizes, all the survivors (including Liam Hemsworth) board a floating ghost vessel, but escape seems futile as death just restarts the process once more. At the halfway point, I wasn’t positive that Smith would be able to land the finishing blow to his purgatorial gimmick. After quite the walloping ending, consider my fears all for naught.

The best and most beautiful things in the world cannot be seen, nor touched… but are felt in the heart.