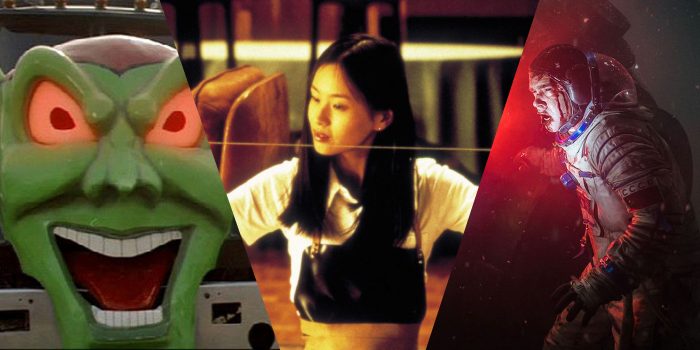 (Welcome to Now Scream This, a column where horror experts Chris Evangelista and Matt Donato tell you what scary, spooky, and spine-tingling movies are streaming and where you can watch them.)

Matt: Happy New Year, I guess? As the calendar turned from 2020 to 2021, we all thought, “How could it possibly get worse?” Then Donald Trump encouraged and incited a coup at Capitol Hill, the day that I’m writing about which horror movies are making my resolution list. I don’t know what to do with a lot of the words in that sentence or how they fit together, but sure, here are a few streaming horror films that have been on my radar for far too long that I intend to finally watch this year. Who knows? If there’s not another tyrannical outburst tomorrow, where domestic terrorists are treated like fifth graders who don’t even need a time out, maybe I’ll muster the motivation to avoid doomscrolling into the void and watch something. Here we go again!

Chris: Well, we’re now in 2021, and things are, uh…you know what? Forget it. Just gonna move on. As Matt said above, the latest edition of Now Scream This is all about our “New Year’s resolution” films – horror movies we’ve been meaning to watch but haven’t gotten around to yet. I’m taking things a bit further with my selections: all the titles I list are movies I actually started watching in 2020 but never got around to finishing, for one reason or another – and I vow to finally finish them in 2021. Happy New Year!

Matt: There’s something about the “cinephile gone mad” theme that’s both infuriating and alluring as a horror fan. Do I cringe whenever politicians attempt to use violent media and horror movies as easy-to-peg scapegoats? Every time. Does a 1980s thriller about a loner who recreates his favorite on-screen incidents during a killing spree sound like everything I’m looking for in a fake-as-made, entertainment-only horror film? You betcha. When Vernon Zimmerman’s Fade To Black hit Shudder however many weeks back, it immediately was added to my watch list thanks to excitement from my more studied genre compadres. Thinking this will be my first distraction watch of 2021.

Chris: This movie is a real gem, and it features an amazing fake commercial for donuts. The donuts don’t even have a brand in the commercial – they’re just called donuts. And there’s a theme song that goes something like this: “Donuts! They’re doughy!” I promise I am not making this up.

Matt: As someone who vocally champions Álex de la Iglesia’s catalog, The Bar has escaped me thus far. From Christmas Horror to “bitching” covens, or sad clowns to musical comedies, Iglesia takes credit for some of my favorite entries into my favorite subgenres. So how did I miss the Madrid-set chamber feature about regulars trapped inside a decrepit barroom? Alcohol and horror define my most rewatched escapes from Feast to Grabbers, and with Iglesia behind the camera, all odds point towards my adoration of The Bar. Those sitting on stools slugging drinks now become paranoid thinking an assassin hides within their pack, then…well, you know the drill: treachery, finger-pointing, and plenty of assumed suspense.

Chris: In an odd turn of events, I’ve actually seen almost every movie on Matt’s list. Almost. I have not seen this one, though.

Matt: Any movie that villainizes a vending machine and kills children with said soda dispenser is something that should probably be in my all-time Top Ten. Er…ok. My all-time Top Ten for bonkers midnighters. From what I understand, Maximum Overdrive is Stephen King at his most disastrously unhinged as a creator, visionary, and arbiter of quality. As Chris already remarked in a previous installment, “All I know is that it’s hard to hate Maximum Overdrive, a film where King has a cameo as a man who gets upset when an ATM calls him an asshole.” Maybe I’ll pop a few beers and drink Friday night away with King’s zaniest doomsday because, well, fantasy trash is better than watching reality trash.

Chris: Look, Maximum Overdrive is terrible. But I also love it. You can practically feel the cocaine coursing through director Stephen King’s bloodstream as the film unfolds.

Matt: When found footage appreciators break into smaller groups within horror circles, “The Poughkeepsie Tapes” inevitably rolls off someone’s tongue. Its notoriety is that of outrage and disgust because why would anyone want to view a serial killer’s collection of each victim’s final breaths? It’s sadistic, twisted, but as one of those found footage obsessors who thinks the subgenre is one of horror’s mightiest when executed above base-level tropes, this non-watch has haunted my must-see plans. Hell, it was good enough to score the Dowdle brothers the [REC] remake gig. Plus, not that I admit such often, but I’ve already seen the worst of the gory Saw rip-offs and dare-stunt titles like A Serbian Film. Do your worst, fake snuff streamer.

Chris: Most people seem to loathe this movie, but I continue to find it highly effective. There’s some genuinely disturbing stuff in here.

Matt: My tendencies when watching horror seem to fixate on specific flavors for enduring durations. Case in point: one of my earliest deep-dives into horror was into extreme Japanese midnighters like Tokyo Gore Police, Dead Sushi, Battlefield Baseball, or whatever gonzo J-Horror import on Netflix crossed by eyeballs any given day. This led me to Battle Royale, this led me to Takashi Miike, and yet, somehow, never Audition. Like, I’ve seen Horny House Of Horrors before Audition. Then, when my obsession moved onto 80s slashers or horror musicals, Japanese horror went on the backburner. At times, I’m my own worst enemy. Watching Audition counts as self-betterment, correct?

Chris: Genuinely surprise Matt hasn’t seen this one! Not in a judgemental way, mind you – just surprised, since Matt has seen so much horror stuff I haven’t. Excited for him to go on this journey.

The post Now Scream This: Our Horror Movie New Year’s Resolutions for 2021 appeared first on /Film.

DC’s Polka-Dot Man: 5 Things To Know About The Suicide Squad Member From The Comics

Whoopi Goldberg Wants To Play A Superhero, And She’s Got A Great Plan To Make It Happen