Break out your container of Dapper Dan, because the cast of the Coen Brothers’ stylish adventure film O Brother, Where Art Thou? is getting the band back together.

George Clooney, John Turturro, Tim Blake Nelson, and Chris Thomas King are among those who are set to reunite next month – virtually, of course – to celebrate the movie’s 20th anniversary at the Nashville Film Festival. Get the details below.

It’s hard to believe that it’s been two decades of constant sorrow since O Brother, Where Art Thou? stormed into theaters, but the Coens’ Southern-fried adaptation of Homer’s The Odyssey is about to cross the twenty year mark. To celebrate that occasion, and to talk about the film’s incredible soundtrack which helped usher in a resurgence in the Americana, folk, and bluegrass genres, several of the cast members are getting back together to share their memories about working on the movie.

Variety reports that Clooney, Turturro, and Nelson, who played the film’s three central characters – escaped convicts who unwittingly form a band – will participate in an interview for the Nashville Film Festival early next month, along with Chris Thomas King, who played guitarist Tommy Johnson. King will give a musical performance in addition to the interview, and other folks who contributed to the movie’s soundtrack will be in attendance as well:

Also offering musical performances will be Dan Tyminski of Alison Krauss & Union Station, who provided Clooney’s “Soggy Bottom Boys” singing voice on “I Am a Man of Constant Sorrow” and other songs in the film, and two representatives of the Carter Family whose early 20th century sound was repopularized by the film, Carlene Carter and her daughter Tiffany Anastasia Lowe. Kathleen Edwards and the Dead South will offer songs as part of the tribute as well.

Nashville Film Festival passholders can watch the event for free, but it only costs $12 for everyone else. You can get tickets here, and it seems as if the viewing window will be open for the entire length of the festival, from October 1 until October 7, 2020.

“The Nashville Film Festival is honored to host this incredible lineup of actors and musicians and pay tribute to one of the most beloved and revered films of our time,” said Jason Padgitt, executive director of the Nashville Film Festival. “This special online event explores and celebrates the incredible contributions of this film, along with its impact on popular music and culture.” 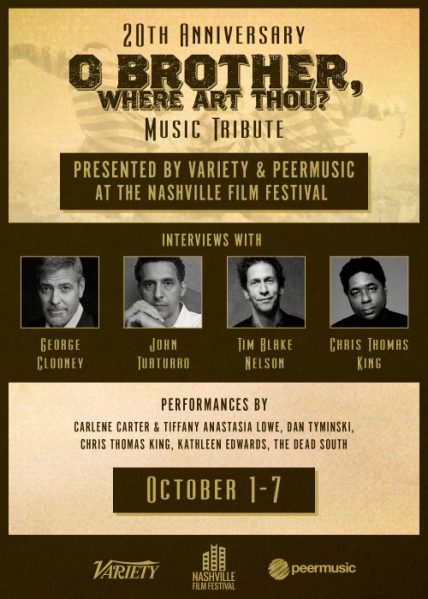 The post ‘O Brother, Where Art Thou?’ Cast Reunion Slated for Next Month appeared first on /Film.

Every problem has a gift for you in its hands.