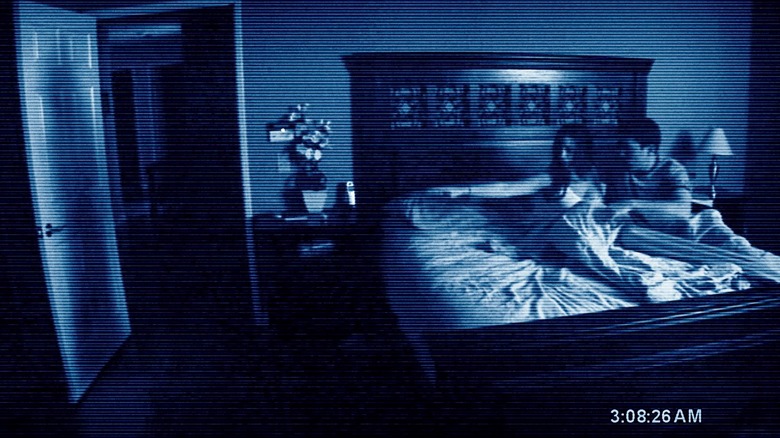 At their core, found footage movies attempt to adopt a verisimilitude of their own making, whether it’s actually trying to make people believe it’s real or not. They’re inherently built upon the foundation that what we’re about to see is the result of something bad that’s happened to the people behind the camera, and we’re the sickos watching it all unfold. “Cannibal Holocaust” and “The McPherson Tape” act as the genesis of this long-lasting subgenre, and are ultimately found footage in its purest form, but it’s “The Blair Witch Project” that popularized the subgenre to the mainstream. Better yet, it helped that these films existed in an era where you actually had a chance of fooling people that they were real. You didn’t quite know where the movie was going, but chances were good that it wasn’t going to be a happy ending. This is where “Paranormal Activity” comes in.

The little home movie that could, “Paranormal Activity” was a phenomenon when it scared movie audiences in 2009. It made a monumental $193 million on a minuscule budget of $15,000, according to The Wrap, and helped usher in a new era for found footage. They even had an entire marketing campaign dedicated to making audiences demand that it come to theaters in their respective area. From there, the series would produce over $900 million through five sequels and an outlier for Paramount+ that’s really a “Paranormal Activity” movie in name only. It’s strange to think of a subgenre that usually results in a bummer ending forming enough of a long and complicated mythology to keep these characters coming back.

In case you need a refresher, “Paranormal Activity” stars then-unknown talents Katie Featherston and Micah Sloat as a couple who begin to experience the rumblings going on at night in their San Diego home. Believing that they’re being haunted by a spiritual entity, Micah sets up a camera in the bedroom to record any possible bumps in the night. As the night terrors get progressively worse, so does the capacity for this couple to deal with whatever’s happening to them, revealing that their haunting may not be as random as they believe. As the series goes forward, it unfurls the legacy of Katie’s family and their ties to a demon that the series refers to as “Tobi.” But at one point, there’s a chance that this horror sensation might have been a one-off due to its ending. 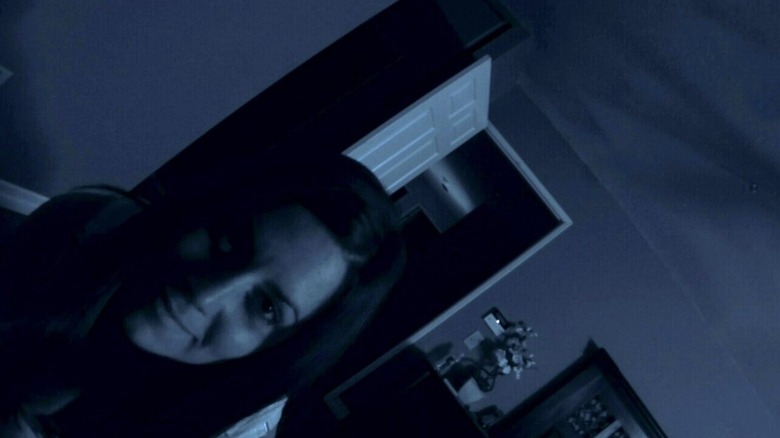 The ending of “Paranormal Activity” that most people are familiar with is the one that was released with the film during its initial wide release. On the penultimate night of the story, Katie is pulled from her bed by nothing, as the door slams shut behind her. Micah immediately wakes up and rushes out to save her, while Katie’s piercing screams echo throughout the hall. When taking a moment to see if she’s alright, Micah notices a large bite mark on Katie’s back. She insists she’s alright, and the next night proves that is far from the truth.

On the final recorded night, Katie wakes up in a trance, giving the impression that she’s been possessed by the demon that’s been taunting them. She proceeds to get out of bed and stare at Micah sleeping for about two hours before going downstairs. Katie lets out a bloodcurdling scream that prompts Micah to rush out of bed and run to her aide. He asks her what’s going on before he lets out a yell and presumably falls to the ground. And in the film’s most memorable moment, we sit in silence for nearly a full minute before Katie flings Micah out of the pitch-black hallway and into the camera, knocking it over. She hovers over his lifeless body before lunging at the camera herself, showing that she has indeed been possessed by the demon that’s been giving them grief throughout the entire film. A closing text reads that Micah’s body was found 3 days later and that Katie has disappeared.

With that, you have an open hook for potential sequels, and sequels there were. It’s still an effective closer that gives us one incredible jolt of a jump scare after so many nights of a small thud or a door slam sprinkled here and there. The person truly responsible for turning this indie horror film into a long-running franchise is not the film’s director Oren Peli, but the legendary Steven Spielberg, who wasn’t a fan of the original ending. Just like that, Spielberg convinced Paramount to provide Peli with $4,000 to come up with another ending before release. Needless to say, if “Paranormal Activity” had retained any of its other alternative endings, we would be talking about this film very differently. 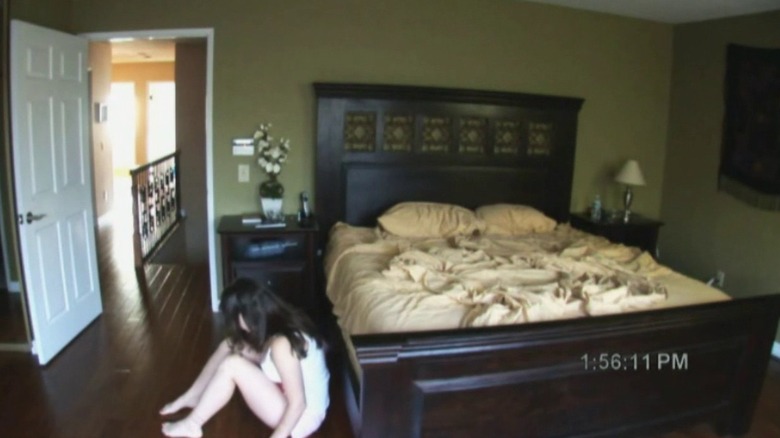 There are essentially three alternate finales, only two of which were actually shot. Either way, the film retains the basic components of Katie’s possession on that final night throughout all of them. According to Entertainment Weekly, the unfilmed ending would have seen Katie picking up the camera and bashing Micah’s face in with it. It sounds like it would have made for an abruptly gory conclusion; one that doesn’t exactly fit with the film’s minimalist tone.

The second alternative ending, which is what Spielberg saw, sees Katie come upstairs after presumably killing Micah. She sits beside the bed, cradling herself back and forth into the next day. You can hear her friend Amber coming to check in on them, only to scream in horror at the discovery of Micah’s body. About a half-hour later, two police officers enter the home and find Katie. Upon shining their flashlights at her, she appears to wake up out of her disoriented trance and asks where Micah is. But because she’s holding the bloodied knife as she approaches them, she’s predictably shot dead. It’s a pretty sad conclusion that doesn’t give Katie the autonomy to explain what happened, and feels more in line with what you might expect to see from watching actual disturbing home footage.

The third alternative ending is perhaps the most chilling. After Micah gets stabbed downstairs, you hear the faint footsteps of Katie getting louder as she ascends the darkened stairs. Once she enters the room, she pauses for a moment and turns around to close the door. She then stands right in front of the camera, and with the most bone-chilling smile on her face, uses the knife to slit her throat. There’s something so unsettling about the silence afterward, as it sinks in that this demon merely wanted to violate this couple’s life for funsies before disposing of them like a kid who’s become bored of their Christmas toys.

What Does This Mean For The Series? 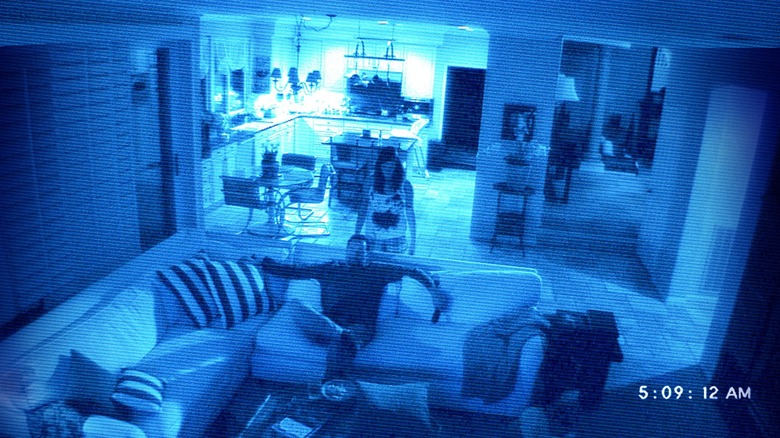 The main thing to remember about the “Paranormal Activity” movies as a series is that there was no overarching plan to build up to something, only to keep audiences coming back for more however long they could rope them in on opening weekend. In the documentary “Unknown Dimension,” which chronicles the history and making of the “Paranormal Activity” series, a common thread throughout involves the creative teams of each sequel admitting that each of these films was still begin written during filming and that they had no predestined plan as to how they would ultimately end. They were essentially making it up as they went along.

The fact that “Paranormal Activity” was able to keep things running that long, before truly falling flat on its face with a lazy attempt at 3-D found footage (“Paranormal Activity: The Ghost Dimension”), is kind of impressive. “Paranormal Activity 2” came as a surprise because it slowly revealed itself to be a prequel, focused on Katie’s sister Kristi (Sprague Grayden) and her family, before showing what happened to Katie after the events of the first film. And then you have “Paranormal Activity 3,” which goes all the way back to 1988 to show Katie and Kristi’s childhood, when the hauntings first began.

The basic gist of the first trilogy is that when they were younger, Katie and Kristi were unknowingly inducted into a cult by their grandmother, who offered them both to “Tobi” at a young age to eventually provide him with a male heir to inhabit his body. In the second film, Kristi gives birth to Hunter (Jackson Xenia Prieto), who turns out to be the first male born into the family in ages. Had “Paranormal Activity” been a one-and-done experience, the most we would have gathered is that this entity that’s haunting Katie would have been targeting her alone. In the second film, however, it’s revealed that because Kristi gave birth to Hunter, she is the focus of the demonic haunting, and the only way to get rid of “Tobi” is to pass it on to Katie. Therefore, the events of the first “Paranormal Activity” are set into motion. But it doesn’t matter because the possessed Katie comes back and kills Kristi and her husband before leaving with Hunter into the night.

An Encounter With The Marked Ones 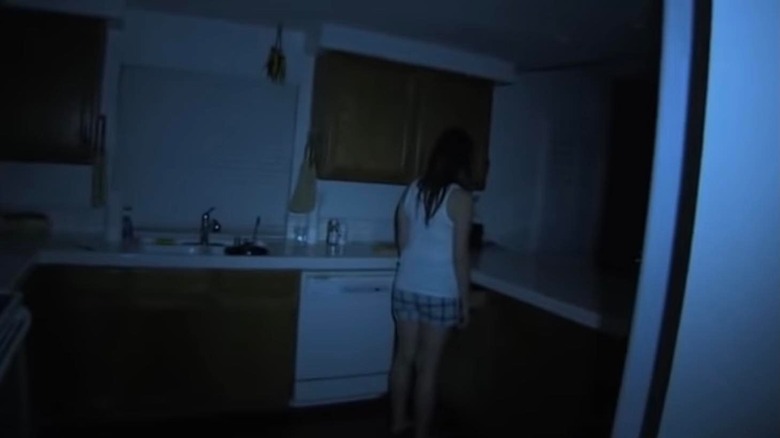 Even when the sequels deviate from Katie’s immediate family as the sole focus, she still acts as a throughline that gets more and more convoluted as it goes on. “Paranormal Activity 4” tries a switcheroo thing with Hunter, but suffers from poor writing. But “Paranormal Activity: The Marked Ones” is where things get interesting. To keep it short, this is the entry that ends with introducing time travel.

The lead characters of “The Marked Ones” end up at the grandmother’s home and are attacked by the members of the demon cult. Scared for his life, Hector (Jorge Diaz) runs inside a closet before emerging on the other side in a completely different location. It doesn’t take long before we realize that we’re in Katie’s house right before she kills Micah. For the first time, we get to see what happened downstairs on that fateful night. Confused by what’s happening, Hector slowly approaches Katie to ask her where he is, only to send her screaming for Micah. Hector runs as Katie then proceeds to stab Micah in the chest in the kitchen.

The ending to “The Marked Ones” tries to say that the reason Katie snapped is due to the sudden presence of a stranger in her home in the middle of the night. But surely Katie was still possessed by the demon, so we end up with a clever nod to the first film that doesn’t entirely come together. But then again, introducing time travel to a format that wants you to believe what you’re seeing is real comes with its own set of complications. “Paranormal Activity” could have remained this singular piece of horror, but by relegating its other endings in favor of one with a loose end, it allowed subsequent films to try out new ideas like this, whether they actually worked or not.