Every four or eight years, at least in the last handful of decades, there has been an important passing of the guard in American culture. Yes, of course, there’s the whole “peaceful transfer of power” bit of the American presidential elections (or…y’know…there used to be). But of almost certain equal importance is the transition displayed within Walt Disney World’s theme-park attraction The Hall of Presidents. Disney has just announced the arrival of the attraction’s new star: President Joe Biden, revealing the robot version of the current American President. 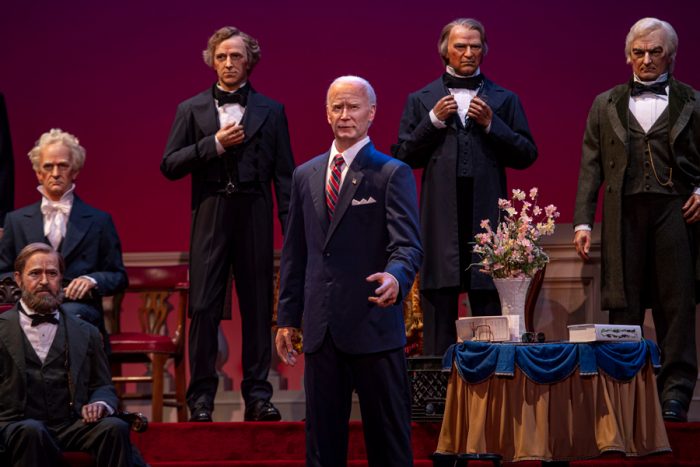 Yes, that’s right: the Hall of Presidents will be welcoming its newest entrant in August. The photos from the Disney Parks Blog reveal what President Biden’s Audio-Animatronic will look like, and whether or not he’ll have his trademark aviator sunglasses. (Spoiler alert: the answer to that one is yes.) The post also confirms that you’ll get to hear President Biden speak via the presidential oath of office he’s recorded.

And for those of you who are intensely distressed at what will happen to the previous denizen of the centerpiece part of the attraction, Disney has stated that “the Audio-Animatronics figure of former President Donald J. Trump will take its place on stage among those who have previously served.” Some of you can breathe a sigh of relief, while the rest of us can sarcastically say “Oh, goody.”

Kidding aside, this arguably speaks to a bigger problem that the Hall of President unfortunately represents. Some people who visit the new version of the Hall of Presidents are going to be thrilled to no longer hear the voice of the previous president, while others are going to be pretty distressed to hear the voice of the current president. (Unlike the previous president, at least the turnaround for Biden has been much less delay-ridden in getting the attraction back up and running.) It’s not that an attraction dedicated to honoring the presidents of the United States is a bad idea. Far from it. But the tradition of including an Audio-Animatronic version of the current president is one that only extends as far back as Bill Clinton’s presidency.

So here’s a thought experiment: maybe just redo the Hall of Presidents so that none of the speakers are current leaders of the free world. Include them in the roll call, design an Audio-Animatronic if you must, but the next time around, maybe it’s time for Walt Disney Imagineering to stop making the newbie the star.

The post President Biden is Headed to Disney World’s Hall of Presidents – Check Out the New Audio-Animatronic Figure appeared first on /Film.

‘Slash Film: Could Taskmaster Return to the MCU? That Mysterious Actor Weighs In’