The end of The Mandalorian season 2 had a big reveal. If you know (or read the headline for this article), you know. It might not as big as the reveal at the end of the show’s first episode (it’s hard to beat Grogu), but it’s a big reveal nonetheless. I’m talking, of course, about a young Luke Skywalker (Mark Hamill) showing up and saving the day.

Hamill’s cameo was exciting, and not only because he’s Luke Skywalker. It was also exciting because Hamill’s Luke looked very much like he did in the 1983’s Return of the Jedi. The technology for getting Hamill to look so young was no small feat. Lucky for us, there will be a new special on Disney+ that delves into how Lucasfilm pulled this off.

That special is part of the Disney Gallery: The Mandalorian series, and is descriptively titled, “Making of the Season 2 Finale.” In this bonus episode, we’ll get a behind-the-scenes look at the final episode of season 2.

According to Disney, most of that episode will focus on how they made Hamill look so young, exploring how the Mandalorian team collaborated with Hamill to create the younger Luke. It will also delve into “the immense pressure and responsibility the filmmakers had in bringing back one of the most important characters in film history.” 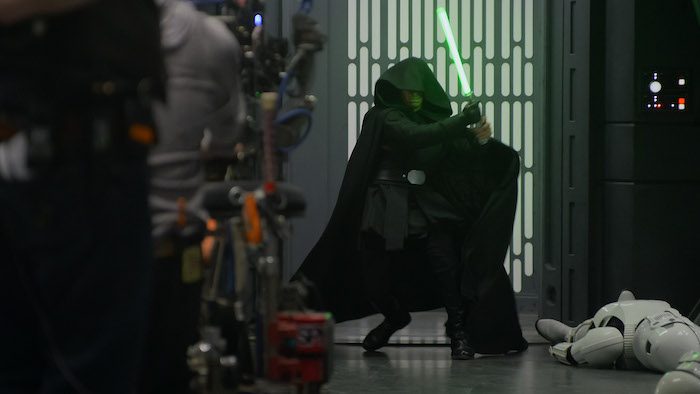 Digital De-Aging Through the Years

Digitizing older actors to look like their younger selves, or even creating digital versions of actors, isn’t new. We’ve seen it done in 2016’s Star Wars: Rogue One with Peter Cushing’s Grand Moff Tarkin. That result had too much of an uncanny valley effect for many, including me. Cushing’s digitization was a different situation than Hamill in The Mandalorian, however, since Cushing had passed away long before Rogue One was in production.

Perhaps the most similar example to young Luke, however, can be found in the Marvel Cinematic Universe. The events of Captain Marvel take place in the ‘90s, and Samuel L. Jackson’s Nick Fury was impressively de-aged for the entire film. Kurt Russell, Michael Douglas, Michelle Pfeiffer, and others have also been de-aged in the MCU. And then there’s The Irishman, which de-aged Robert De Niro, Joe Pesci and others using cutting edge visual effects.

The Mandalorian’s treatment of Luke is arguably as realistic as Jackson’s de-aging in Captain Marvel, and I’m curious to learn more about how it was done. I’m also curious whether they’ll get into the young Jedi’s amazing fight scenes as he plows his way through a bunch of bad guys to get to Grogu.

Whatever this special episode entails, The Mandalorian itself has been an unquestionable success. The second season just picked up 24 Emmy award nominations, including a nod for Best Drama Series. We’ll also get a third season of the show sometime in the future, though it won’t drop until after the Book of Boba Fett spin-off premieres this December.

This special extra episode of Disney Gallery: Star Wars: The Mandalorian drops on Disney+ on August 25, 2021.

‘KinoCheck : FROZEN 3 – How Will The Story Continue?…’