Time for another look at Kristen Stewart as Princess Diana in Spencer, the upcoming film from Jackie director Pablo Larrain. There was a lot of talk about how Stewart was “unrecognizable” when the first image, which you can see above, was released for the film. I didn’t quite agree with that assessment. However, I do think Stewart is almost unrecognizable in this new image, which you can see below. I can’t quite put my finger on it, but there’s something else going on here beyond a wig. Prosthetics? Make-up? Just a trick of the lighting? You decide. 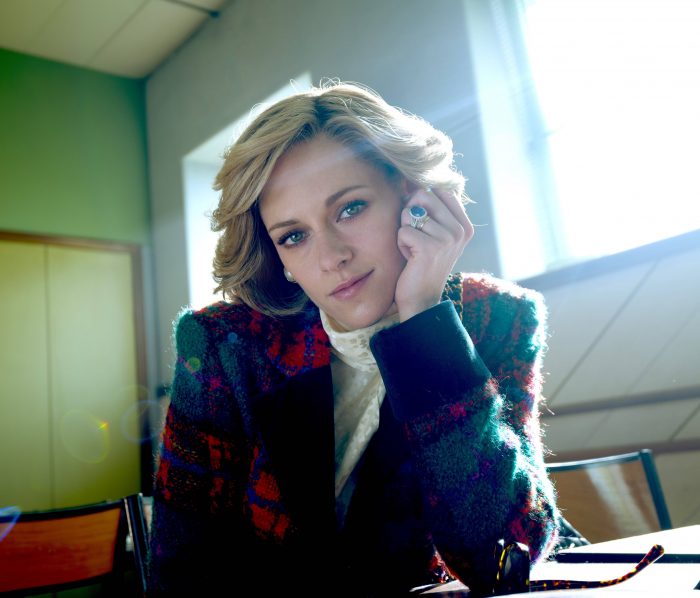 So what say you, internet? Is there more to Kristen Stewart’s Princess Diana look than just a wig? A part of me thinks she might be wearing a fake nose, but again that could just be a trick of the lightning. Either way, I’m very excited for Spencer, a film that seems to be cut from the same mold as director Pablo Larrain’s fantastic movie Jackie. Just as that film told the story of a famous, historical female figure over the course of a few traumatic days, so, too, does Spencer. Here’s the synopsis:

The film focuses on one weekend in the life of Princess Diana, as she spends the Christmas holiday with the royal family at the Sandringham estate in Norfolk, and decides to leave her marriage to Prince Charles. Filming has been taking place in Germany, before moving to the UK. An autumn 2021 launch is anticipated. 2022 marks the 25th anniversary of Diana’s death.

December, 1991: The Prince and Princess of Wales’ marriage has long since grown cold. Though rumours of affairs and a divorce abound, peace is ordained for the Christmas festivities at Sandringham Estate. There’s eating and drinking, shooting and hunting. Diana knows the game. This year, things will be a whole lot different.

Spencer is just the latest dramatized account of Princess Diana’s life. The latest season of The Crown also introduced Diana as a character, as played memorably by Emma Corrin. Elizabeth Debicki will take over the role for the show’s next season.

In addition to Stewart as Princess Diana, Spencer also features Jack Farthing as Prince Charles. Timothy Spall, Sally Hawkins, and Sean Harris round out the cast. Larrain directs a script from Steven Knight (Locke), and the film will feature a score from Radiohead’s Jonny Greenwood, who is already responsible for some damn great soundtracks (Phantom Thread, There Will Be Blood, and You Were Never Really Here). The production has just moved to the UK for the final stretch of filming, and there’s hope to have it ready by the fall of this year.

The post ‘Spencer’ Image Gives Us a New Look at Kristen Stewart as Princess Diana appeared first on /Film.