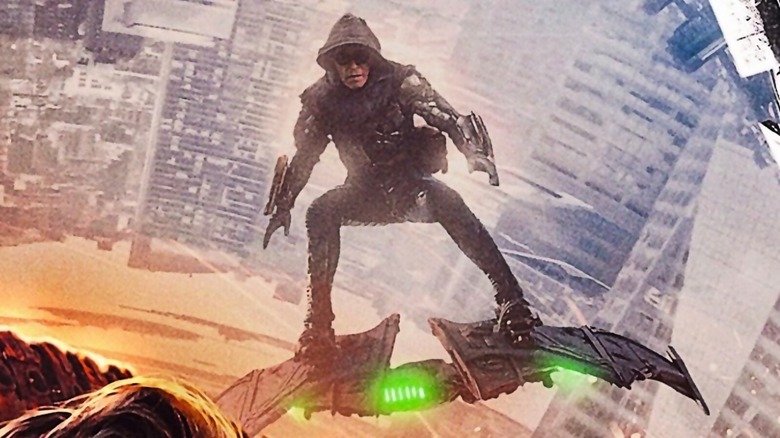 Willem Dafoe’s Green Goblin has a fresh new universe to terrorize, and a fresh new outfit to terrorize it in. On Thursday, November 25 — just in time for us to give some serious thanks — Sony dropped a brand new “Spider-Man: No Way Home” poster that confirms Dafoe’s costume for the upcoming film.

An international Twitter account for Sony debuted what they called the “latest visual” for the project, which is stylized much like a traditional blockbuster poster with Tom Holland, Zendaya, and Benedict Cumberbatch’s Doctor Strange as large busts placed center on the image. The group is surrounded by Doc Ock’s mechanical arms — and just above Strange’s head, we can see a small Green Goblin hovering on his board, hooded and cloaked.

That being said, when you zoom in it’s very obvious that the particular Green Goblin in question is definitely the original incarnation of the character, famously played by Willem Dafoe. The “Spider-Man: No Way Home” poster released earlier this month also gave fans a glimpse at Green Goblin — but it was truly just that, a glimpse. The character was an obvious addition to the visual, but was way too far away and out of focus to confirm whether it was Dafoe, or later incarnations of the character, like Dane DeHaan’s turn in “The Amazing Spider-Man 2,” or even James Franco’s Harry Osborne (who took his father’s place as the Green Goblin in the Sam Raimi trilogy).

I’m ridiculously excited to have Dafoe back in the fold as Green Goblin. In my eyes, he is the original and the best to take on the character — and I say this as someone who fiercely loves DeHaan as well — so it makes the most sense to have him involved. I wouldn’t mind seeing DeHaan, too, but if we only get one Goblin, I’m glad it’s Dafoe.

Who Else Can We Expect To See In No Way Home?

‘Slash Film: The Best Movies And Shows Coming To Amazon Prime In December 2021’