This article contains spoilers for Star Wars: The High Republic – Into the Dark.

Fan favorite Star Wars author Claudia Gray comes back to Star Wars in the High Republic era with Into the Dark. Like the title implies, it’s a darker look into this spot on the timeline and introduces new elements to The High Republic that may prove much more lethal to the Jedi than just the Nihil, the villains seen in the other books set in this era.

The book follows a Padawan named Reath Silas, among others. Silas really loves his situation on Coruscant in the Jedi Temple. He’s a bookworm and loves spending all his free time in the Archives. So when his master takes the top spot on the frontier at the Starlight Beacon, his life is turned upside down. If there’s one thing he wants, it’s to not go lead the life of a Jedi on the frontier. But, being a good Padawan, he goes. He leaves to meet his master, but his ship is knocked out of hyperspace by the cataclysmic event that has been featured in all the other High Republic books. Lost in space, the ship Silas is aboard and a number of other ships in similar predicaments make their way to a deserted space station for refuge.

Ultimately, this isn’t a good move.

The station is inhabited by nothing more than a team of droids tending to a mysterious garden. It seems like it will work as a perfect port for the storm everyone finds themselves in. Under the direction of the Jedi, all of the refugee ships split their resources and rations to benefit everyone equally and it seems like they’ll be able to ride out the crisis.

As with any creepy abandoned space station, that’s when things start to go wrong. The Jedi discover that the station was originally built by a war-like group from antiquity called the Amaxine warriors and the station was left vacant to keep control of the evil plant-based species the Drengir, who would be content to conquer worlds and eat their populace.

The Jedi, through the best of intentions, lose control of the Drengir and have to work to fix the situation with middling success.

The Amaxine Warriors were a conquering society across the galaxy and were at their height at the dawn of the Republic. Rumors say they left this galaxy for another, seeking better worlds to conquer. Other stories, after Into the Dark, wonder if the Drengir were too much for this warrior people and they were actually extinct. They were first introduced in Claudia Gray’s book Bloodline, where a paramilitary organization adopted their name, though some of their history was mentioned.

References to the Amaxines have spread through the new canon since then. Future Star Wars stories told in that era near the founding of the Galactic Republic will almost certainly include the Amaxine warriors and their conquests across the known galaxy. 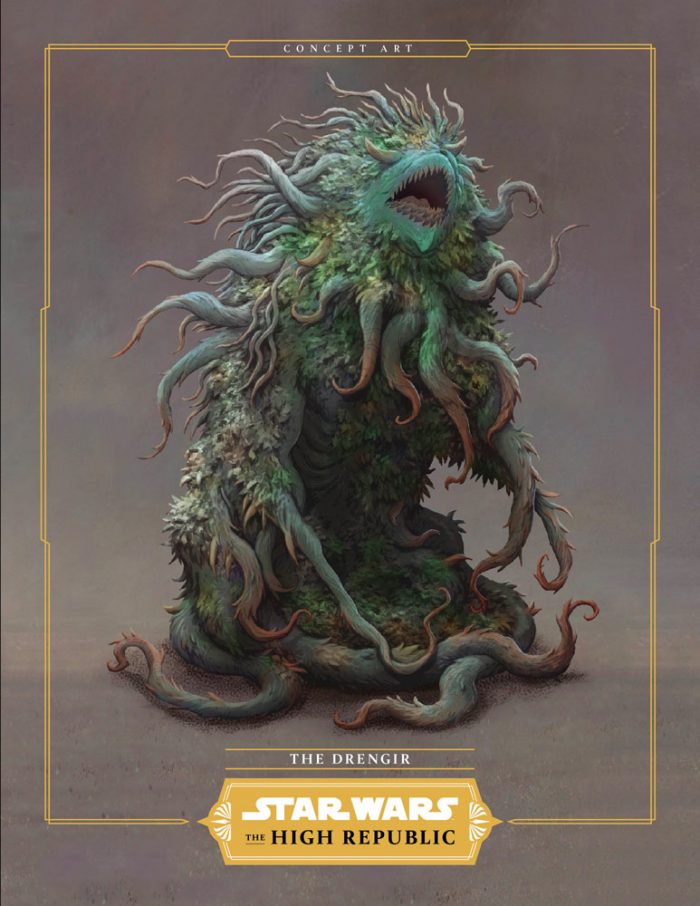 The Drengir and the Nihil

The main villains so far in the era of The High Republic have been the Nihil. They’re a marauding band of pirates who have a secret weapon that allows them to travel in secret hyperspace lanes – they’re the ones who inadvertently caused the great catastrophe. And because of the calamity, they seem to have just declared war on the Republic and the Jedi. But they’re all just mere mortals, wearing masks to make themselves seem more imposing than they are. Even with their superior access to the space lanes, they aren’t exactly going to win in a stand-up fight against the Jedi.

It seems likely that this is where the Drengir fit in. The Drengir are a species of carnivorous plants that seek to consume life across the galaxy. They’re powerful. It takes great forces of Jedi power and a deep knowledge of the Force to keep the Drengir locked away on the Amaxine station. When the Jedi of the High Republic sense evil in the station, they never once think it is the plants – they think it’s been contained in the objects that were containing them. So when they bring those objects to Coruscant to purify them, they give the Drengir a window of opportunity and all hell breaks loose for the Jedi.

Will the Drengir and the Nihil somehow team up to wreak havoc across the galaxy? That seems very likely.

One thing everyone is going to want to be aware of is the real star of this book: Geode. Geode is a rock who seems completely inanimate and you spend half the book wondering if he’s actually even a real person. He’s essentially a sentient rock, a representative of the Vintian species. He’s the navigator of the Vessel, the ship that the Jedi are being transported on in the first place. Padawan Reath Silas can’t even figure out if Geode is a joke that’s being played on him or not.

But somehow, this character who doesn’t speak and isn’t even seen moving becomes the runaway star of the book. If there is anything people will be talking about after this book, it’s going to be Geode and how utterly charming and hilarious he is.

He’s a star. Or a rock, actually. With a glittering heart of crystal, just as his name implies.

Into the Dark is a great book and it’s apparent that Lucasfilm picked the right group of people to launch an initiative as important as The High Republic. All of the authors behind each story have their own voice and unique tale, even though it’s dovetailed into common events. They’re creating an expansive cast across an impressive tapestry. Into the Dark adds to it in ways that deepen the mystery of the trials the Jedi will be facing in this era, but at the same time allows an incredible author like Claudia Gray to spread her wings and give us something quirky, too. Like Geode.

Though this piece covers the broad strokes of the book and covers everything you need to know if you decide to skip it, it’s a roller-coaster of a ride on its own and you should consider picking it up to read anyway. It’s a hell of an experience from one of the best writers working in Star Wars.

The post ‘Star Wars: The High Republic – Into the Dark’ Brings a Terrifying New Villain Into the Galaxy Far, Far Away appeared first on /Film.

Happy Birthday 007: Why April 13th Is So Important To James Bond History