In this edition, of Superhero Bits:

Spidey and His Amazing Friends Theme Song by Patrick Stump

Unless you’re a young kid, Disney Junior’s animated series Spidey and His Amazing Friends probably isn’t your speed. But I think we can all agree that the theme song created by Fall Out Boy front man Patrick Stump (who also serves as songwriter and composer for the series) is a catchy jam. The lyrics even manage to get a “Go webs, go!” reference in there for good measure.

If you’re interested in showing your kids this series, it features Spider-Man, Gwen Stacy, Miles Morales, Kamala Khan, Black Panther, and the Hulk as they deal with bad guys like Doc Ock, Green Goblin, and Rhino. Geared towards preschoolers and their families, the series models the importance of teamwork and helping others and highlights themes of friendship, cooperation and problem-solving.

You can catch Spidey and His Amazing Friends on Disney Junior sometime this summer, and the soundtrack is set for release on September 17, on Walt Disney Records. 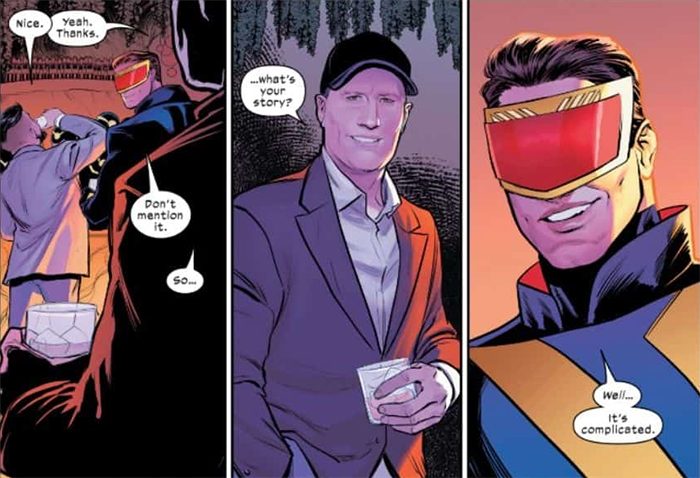 Kevin Feige is the maestro of Marvel Studios and the Marvel Cinematic Universe, but he just recently crossed over into Marvel Commics with a cameo in X-Men #21, the final issue penned by Jonathan Hickman.

In the issue, there’s a big party being held at the Hellfire Gala. After Cyclops orders a round of drinks for everyone in attendance, he’s addressed by a familiar man in a black baseball cap. It’s none other than Marvel’s head honcho Kevin Feige, and he asks, “So… what’s your story?” Cyclops simply smirks and replies, “Well, it’s complicated.”

This feels like a sly nod to the fact that the X-Men will be joining the Marvel Cinematic Universe sometime in the future. After all, figuring out how to fit the mutants into the already crowded comic book movie universe could prove to be rather complicated, especially when it comes to their origins. But maybe the introduction of the multiverse will make that much easier.

Earlier this week, Tom Hiddleston (virtually) stopped by Jimmy Kimmel Live to coincide with the premiere of Marvel’s series Loki. The actor talks about meeting Chris Hemsworth back when they first started working on the Thor franchise, and they even rag on Matt Damon a little bit for his appearance in Thor: Ragnarok as an actor playing Loki on stage. 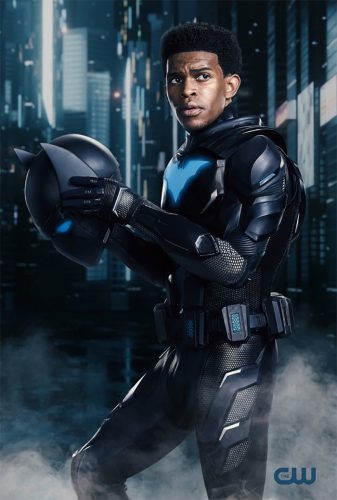 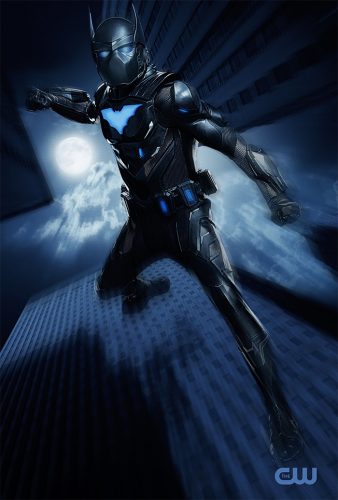 Batwing is Coming to Batwoman Season 2

The CW is currently in the middle of the second season of Batwoman, and the show will be introducing a new crime fighter who has yet to be seen in the DC Comics television universe.

Camrus Johnson has been playing Lucius Fox’s son, Luke Fox, since the Batwoman series began. Like his father’s role for Bruce Wayne as Batman, he’s been acting as tech support to both Kate Kane and Ryan Wilder in their tenure as Batwoman. But now he’s suiting up himself as Batwing. Johnson posted the above images on Twitter and said:

“A dream come true, a complete honor, and a message to every little black boy out there that you can be a hero too. You already are one.“

What’s even more impressive is that Camrus Johnson also has another hand in the world of Batman. He also wrote the comic Batman: Urban Legends #4, which is on shelves now and features Batwing. It’s not often you have an actor who’s playing a superhero and also writing comics about that same superhero.

Batwing will debut on Batwoman sometime later this season.

Here’s a quick TV spot for Marvel’s Black Widow, for which tickets are now on sale. Here’s the official synopsis:

In Marvel Studios’ action-packed spy thriller “Black Widow,” Natasha Romanoff aka Black Widow confronts the darker parts of her ledger when a dangerous conspiracy with ties to her past arises. Pursued by a force that will stop at nothing to bring her down, Natasha must deal with her history as a spy and the broken relationships left in her wake long before she became an Avenger.

After being delayed from release last year during the coronavirus pandemic, Marvel’s Black Widow is finally slated to hit theaters, and debut on Disney+ Premier Access, on July 9, 2021.

Since Tom Hiddleston is making the publicity rounds for Loki, the actor was inevitably asked about whether or not we’ll see the God of Mischief pop up in Thor: Love & Thunder. The character clearly isn’t as dead as he seemed to be in Avengers: Infinity War, but if you understand how Loki’s story is being told in the Marvel Cinematic Universe right now, you already know why he’s not exactly back from the dead. Hiddleston confirmed what we all expected, telling Empire (via Digital Spy):

“We talked about the Thor movies as a family saga, and the diametric opposition between Thor and Loki and duality and antagonism being a book that perhaps should remain closed for the moment. We have explored about as much as we can about these two brothers.”

In the new SXM Podcasts original documentary series, listeners can trace the rise of Comic-Con in the style of an oral history. Weaving together personal stories and outrageous anecdotes from key players in the early days of the convention, the podcast traces the event’s evolution from a disorganized gathering of comic book and sci-fi geeks to an international cultural pillar where top studios, networks, and creators showcase the latest developments in sci-fi, comics, and fantasy.

All six episodes of Comic-Con Begins will be available to SXM App and Stitcher Premium subscribers starting on June 22. Otherwise, the first episode will be available that same day for everyone else on the SXM App, Pandora, Stitcher and all major podcast platforms, but the rest of the episodes will be released weekly.

If you’re a fan of the Harley Quinn animated series, you’ll be happy to hear that there’s a spin-off comic on the way that will take place between the end of the show’s second season and the upcoming third season. The series is called Harley Quinn: The Animated Series – The Eat, Bang Bill Tour, and it sounds like a Thelma & Louise kind of ride in the official synopsis:

“Harley and Ivy on the road trip of the century! Following the wedding disaster of the decade, Harley Quinn and Poison Ivy end up on the run from Commissioner Gordon and the GCPD! But as fun as all that sounds, Ivy still worries over leaving Kite Man at the altar… Luckily, Harley’s got the perfect scheme to shake her out of her wedding-day blues!”

What more could you ask for from an adventure with Harley Quinn and Poison Ivy? The comic begins September 14. 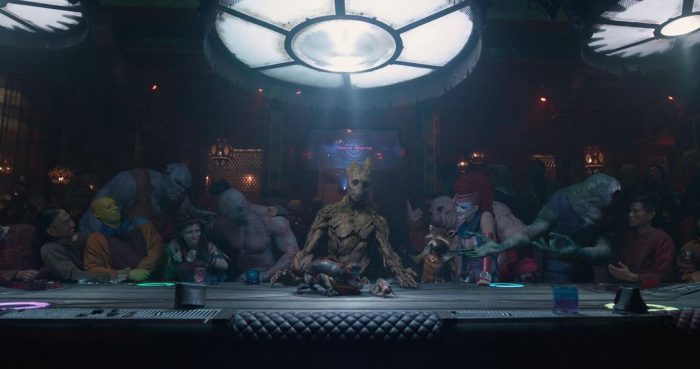 Guardians of the Galaxy Deleted Scene

Finally, James Gunn posted this image of a Guardians of the Galaxy deleted scene on Instagram. Intended to foreshadow Groot’s future sacrifice to save his friends, the shot is modeled after Leonardo da Vinci’s famous painting “The Last Supper.” Even though the scene never made it into the movie, it was finished by the visual effects artists at Framestore.