Here’s the promo and official synopsis for the 14th episode of the first season of Superman & Lois:

The episode was directed by Alexandra La Roche and written by Max Cunningham & Brent Fletcher.

The Flash Showrunner Thinks Series Has Plenty of Seasons Left

Even though Arrow and Black Lightning have made their exit from The CW, and Supergirl will soon be following, fans may not have to worry about The Flash going anywhere anytime soon. Despite the departure of cast members like Carlos Valdes and Tom Cavanagh, showrunner Eric Wallace still thinks the show will continue for several more seasons. He told Deadline:

“I feel this show could run easily for at least several more seasons, and possibly beyond. Because I feel like every season, we, as a writing staff, have to decide between all the wonderful stories we want to tell, versus how many episodes we actually have to tell them. We have so much more that we’d love to show the audience and give to them, as a thank you for coming along on this ride with us, but we just can’t get to it. That’s why I say, there’s many more seasons worth of stories to tell, at least from our creative perspective.”

Are fans willing to stick with the show for a few more seasons, or have they started to grow tired of the Speedster?

Cracked Made a Sweded Version of Loki

The video team at Cracked had some fun remaking Loki “for just $20.” We’re sure they spent more than that on the video since the salary of their staff for their time spent on this video is worth much more than that alone. But that’s just their way of saying that they made a super cheap version of it in the style of Michel Gondry’s sweded movies from Be Kind Rewind. It’s also more of  parody than a loyal low budget recreation of scenes from the show, which you’ll understand from the very first shot.

Writer David S. Goyer has worked on some of the biggest blockbusters in Hollywood, for better or worse. That means he’s gotten plenty of stupid executive notes about his scripts, including being told to put less magic in a script he once wrote for a Doctor Strange movie. But nothing beats a note he received on the script for Zack Snyder’s Man of Steel. Goyer told The Hollywood Reporter :

“One note I got was on Man of Steel, where the ending involves Superman utilizing the pod that he arrived in as a child in order to bring down General Zod’s ship. The note we got from the studio said, ‘You have to change that.’ We asked why. They said, ‘Because if Superman uses that pod and it’s destroyed while saving the city, how is he ever going to get back home to Krypton?’ There was just this long pause and we said, ‘Krypton blew up. You saw 30 minutes of it!’”

These are the people in charge of the movies we get to see. How can we expect them to make movies worth seeing if they can’t even pay attention to the scripts beforehand? This is why we can’t have nice things.

This is the best moment of my career ?

Teletubbies Responds to Their Surprising Influence on Loki

Director Kate Herron revealed in an interview with ForAllNerdsTV that some of the inspiration for The Void in the fifth episode of Loki came from Teletubbies. The team behind the kids TV show wasted no time in being part of the pop culture conversation by delivering the nightmare fuel that you see above: a Teletubbies version of Loki, complete with mixed up font for the name “Dipsy.” Maybe this is a variant of Loki that will get some screentime in the second season of the Marvel series.

Nerdist created a video breaking down an interesting theory that explains how Kang the Conqueror could end up playing a role in the possible formation of Young Avengers in the Marvel Cinematic Universe. There are a lot of moving pieces in place that could set the stage for the new superhero team, and this video explains how it could all come to fruition.

Don Cheadle Provides an Update on the Armor Wars Series

Armor Wars is one of the many new Marvel Studios shows coming to Disney+ at some point. We’re not sure when the series is intended to debut, but Don Cheadle provided an update to Collider about the status of the show. The War Machine actor said:

“All I know is that we’re going to go into the room in a couple of weeks and actually start trying to break the spine of the story and figure out who, what, when, and where for all of it. It’s super early in the development stages so I couldn’t even spoil it if I wanted to. I don’t know what happens.”

So it sounds like we might be waiting a while before we hear anything official about Armor Wars.

Sideshow Collectibles is having its own little virtual convention throughout the week on YouTube. In this booth tour, they show off a bunch of cool, detailed collectibles inspired by the world of DC Comics, from the pages of various comic titles, TV shows, and movies. Which one do you want to add to your collection the most? 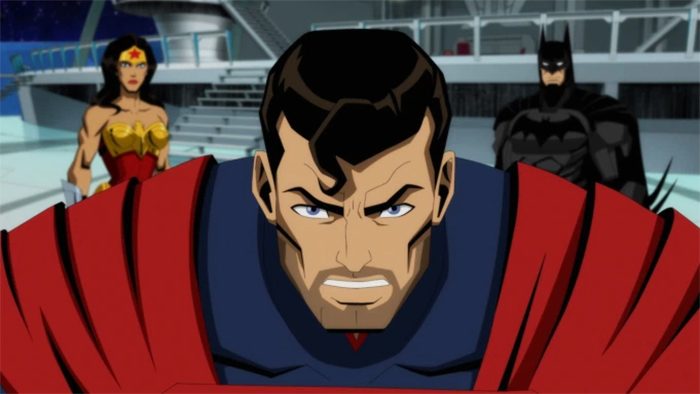 The Hollywood Reporter announced that the video game Injustice: Gods Among Us is getting an official animated movie. The story takes place on an alternate Earth where the Joker has tricked Superman into killing Lois Lane, sending the hero on a rampage. This unhinged Superman decides to take control of Earth for its own good, leading Batman and his allies to attempt to stop him.

Kevin Pollak as The Joker? That sounds like it could be interesting. Injustice will arrive sometime this fall so hopefully, we’ll get a better glimpse of it sometime soon.

‘Slash Film: The Opening Scene of the ‘Loki’ Finale Was an Homage to ‘Contact’’