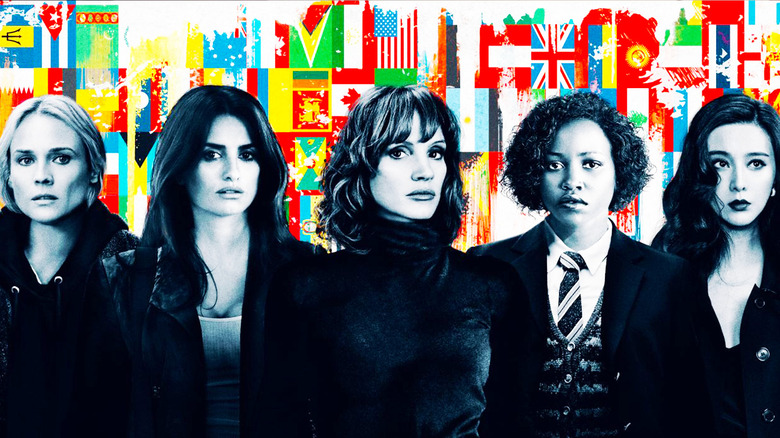 Director Simon Kinberg’s 2022 spy film “The 355” is a fast-paced thriller with so many twists and turns, you may be dizzy by the end. Is it groundbreaking? Not really. Is it fun? Yes. Do the film’s many plot twists call for some explanation and examination? Absolutely, and that’s what I’m here to do! 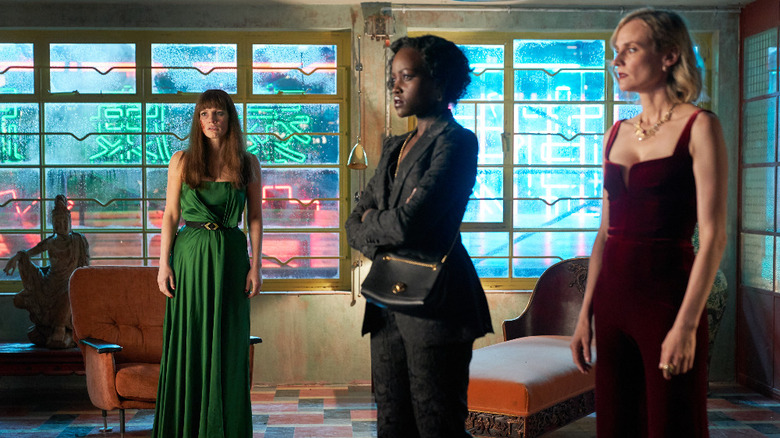 There’s a technological superweapon that has the capability to crash airplanes, bring down entire power grids, and do … all sorts of other devastating techy things that can potentially harm or kill people. A weapon of this caliber obviously cannot fall into the wrong hands, so it’s time to save the world.

But first, it’s time to get laid. CIA agents Mace (Jessica Chastain) and Nick (Sebastian Stan) are tasked with obtaining the superweapon, referred to as “the drive” throughout the film. Before they can do so, Nick decides to use their cover as newlyweds to ask Mace if she wants to bang. She says she doesn’t want to because he’s all she has, and it could potentially destroy their partnership (both professional and personal). Despite saying this, Mace immediately decides that she actually does want a piece of Nick. It’s understandable to wanna get busy with Sebastian Stan while the fate of the world hangs in the balance, I think.

After choosing a really weird time to explore each other’s bodies and pretend an offensively hideous wedding ring looks good, Mace and Nick begin their mission to obtain the drive. Unfortunately, their mission goes awry, resulting in the Nick’s demise — effectively ending their inappropriate bang-buddy arrangement before it even starts. Devastated by the sudden loss of her partner and the thwarting of their mission, Mace embarks on a journey for revenge and recovery, connecting with new and old comrades along the way. These comrades include former MI6 agent and tech wizard Khadijah (Lupita Nyong’o), Graciela the psychologist (Penélope Cruz), MSS Agent Sheng (Fan Bingbing), and BND Agent Marie (Diane Kruger). The women discover the power of teamwork and friendship while fighting, killing, and charming their way through their mission, adjusting to each new development and betrayal that arises. 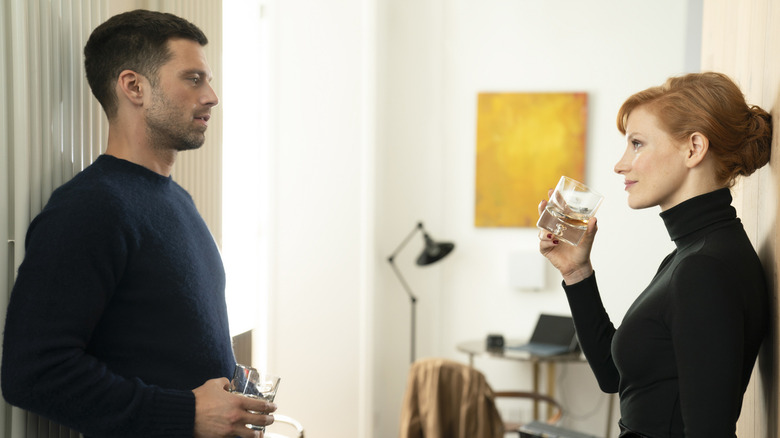 The first hint we get is early on in the film, when CIA Supervisor Larry Marks (John Douglas Thompson) informs Mace that Nick was murdered by enemy operatives who were also after the drive. The thing is, we never actually saw him get shot, nor did we see his body. Not only that, but Larry tells Mace “I ID-ed his body myself,” which was something of a red flag — why couldn’t Mace ID her own partner? Mace is then dismissed, but Larry then goes off record to encourage Mace to seek revenge independently, which is insanely unprofessional and also greatly increases the size of the red flag that had been planted moments prior.

The major betrayal is revealed in the latter half of the film when Mace and her band of super cool super spies (and one therapist) are close to obtaining the drive before it falls into the wrong hands. Mace is caught off guard by none other than her “dead” partner, Nick. He and Larry were working together to sell the drive for personal gain, manipulating Mace by faking Nick’s death and pushing her to pursue his “killers” — and the drive — outside of CIA jurisdiction.

That’s right, Nick’s death wasn’t a death at all. He’s not only alive, but hornier than ever! He tells Mace that he wants to go start a new life with her, claiming that his betrayal was really a favor, and that everyone is corrupt, so why not just sell your soul (and a powerful weapon capable of destabilizing entire countries) to the highest bidder? I don’t know if his horniness clouded his judgment, or if he caught a glimpse of his reflection in the mirror and decided he was hot enough for Mace to abandon her mission at the cost of innocent lives, ignoring the fact that he’s a douchebag turncoat who caused her a world of grief. He is hot, but not that hot, so Mace decides not to take him up on his offer.

So that’s betrayal number one. Nick has been acting as a finger on the wrong hands this whole time, and those hands belong to a villainous man named Clarke, who wants the drive so he can do villain things with it. Nick’s mission is to purchase an antique vase during a fancy art auction — which serves as a ruse for the actual auction of the drive, hidden inside the vase — and he nearly succeeds in doing so despite the best efforts of Mace and her comrades. 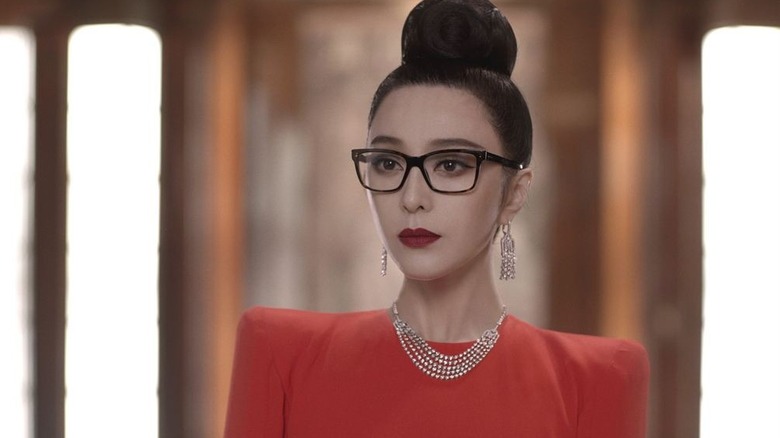 I said “nearly succeeds” because Nick is not actually given a real copy of the drive. Instead, the horny bastard is given a decoy by Sheng, who is actually an MSS agent. Her mission is to ensure that the drive doesn’t fall into the wrong hands. The auction was an MSS setup designed to lure out all the baddies who wanted to do bad things with the drive, so that the information could be used to bring them down. The actual drive was never in the vase, so Nick gets his ass beat by Clarke, who gives him a chance to right his wrongs and get his hands on the actual drive.

Nick decides the best way to go about doing this is to threaten to kill (and then actually kill) the friends and family of Mace’s gunslinging girl gang until they hand over the drive. He stops just short of murdering Graciela’s husband and children, and then finally obtains the drive, taking Sheng with him as collateral. Luckily, Sheng has a secret camera in her glasses, allowing her to surreptitiously guide the other women to her location. They’re able to locate and destroy the drive, but are also unfairly implicated in the many crimes associated with the whole ordeal, and so they are forced to go on the run.

Two months later, Nick has managed to weasel his way back into the good graces of the CIA. Meanwhile, Mace and the other women are still considered wanted criminals (or at least persons of interest?) because nobody can vouch for their heroism and there’s lots of corruption and such. In addition to being a CIA agent again, Nick’s still pretty horny. This explains why Mace is able to invite herself into his really nice house and poison him without much issue using some of Sheng’s “ancient Chinese herbs.” It comes off as a little … problematic, but I feel like that’s a discussion for another time. The rest of the badass lady spy gang shows up to watch the effects of the poison work their magic on Nick, and they inform him that he won’t die. Instead, he’ll be transported to “a prison on the other side of the world” where he will live out the rest of his days.

After their friendly reunion and communal poisoning session, the women amicably part ways. That’s it!

Far From The Worst Spy Movie 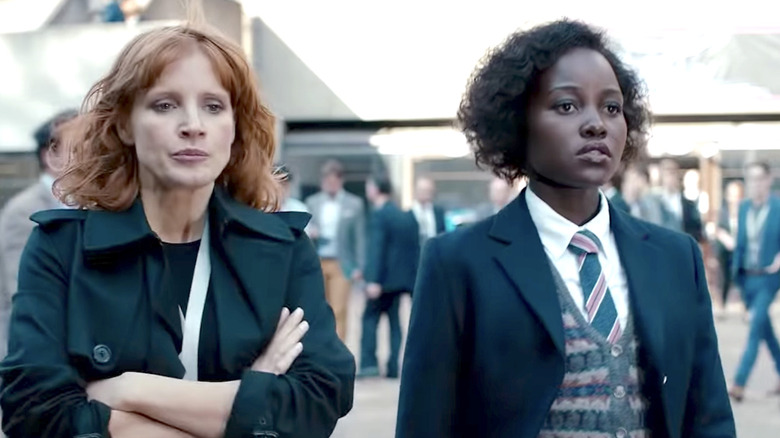 While I admit I enjoyed “The 355” more than most people seem to, it is not without its issues. The majority of the reviews I saw led me to believe it was a pandering, hollow “girl-power” movie. Instead, it was a pretty adequate action/spy movie. Does it have some moments of cringey dialog? Yes. Is there some of the same uncomfortable exoticism and xenophobia that tends to be characteristic of the genre as a whole? Yeah. The “Chinese herbs” thing and an uncomfortable religious appeal to a guy being tortured were not really great. Most of the things I didn’t like about the movie were things that are prevalent in most other films of the same style and genre — except for that terrible wig Penélope Cruz wore during the art auction, which was uniquely offensive.

I also had some issues with the cinematography, particularly in the scene where Mace initially tries to recruit Lupita’s character — the camera kept spinning rapidly, and it didn’t add anything to the scene except a dizzying eyesore. Despite these issues, there are plenty of fun moments, and it’s definitely not the worst spy movie I’ve seen — far from it. I don’t regret spending $9 and two hours of my life on it, and the twists were entertaining and not completely predictable.

Finally, for anyone wondering about the title, Jessica Chastain’s character alludes to it in the last few minutes of the film, when she decides to give Nick a history lesson about Agent 355 — the codename of a female spy for the Patriots during the American Revolution. If you would like to witness this history lesson and the action-packed thriller that contains it, “The 355” is currently playing in theaters.

Read this next: The 15 Best Spy Movies Of All Time

The post The 355 Ending Explained: In the Nick of Time appeared first on /Film.

‘Slash Film: Would Die For Eagly: An Ode To Recent Superhero Pet Sidekicks’

‘Slash Film: Movies Like The Silence Of The Lambs You Really Need To See’