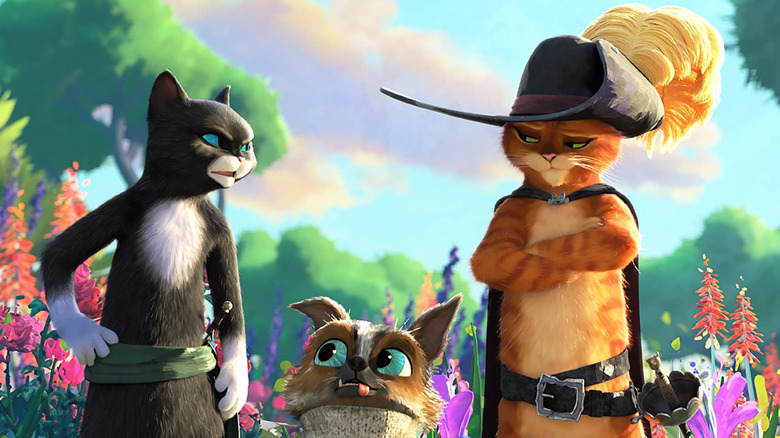 When DreamWorks Animation first announced plans for a “Puss in Boots” sequel in 2014, back when it was titled “Puss In Boots 2: Nine Lives & 40 Thieves,” it almost felt like the world collectively agreed to shrug and move on. The idea of DreamWorks making a followup to a “Shrek” spinoff that had little lasting cultural impact, despite being shockingly (!) well-received by critics upon its release in 2011, was little more than further proof that the studio’s days of releasing bold, intrepid animated movies like “The Prince of Egypt,” dizzying genre homages like “Kung Fu Panda,” and satirical action-comedies that didn’t get the respect they deserved (“Megamind,” the superior animated super-villain film of 2010) were long behind it.

Lo and behold, it’s now 2022, and “Puss in Boots: The Last Wish” (as the film has been re-titled) looks and sounds far better than it has any right to be. /Film’s Rafael Motamayor got to see a half-hour of footage from the movie at the Annecy International Animation Film Festival and describes what he saw as “a shockingly somber, reflective, and visually stunning spaghetti Western about an aging cowboy contemplating whether there is still a place for him in the world — except it’s a cat that wears boots and a little hat.” That’s similar to the impression given off by the latest trailer, which plays up the movie’s kid-friendly humor without entirely softening the surprisingly mature crisis that Puss — once again voiced by a purr-fectly (I regret nothing!) cast Antonio Banderas — must face in the film: Confronting his own mortality.

More than that, the trailer (seen below) highlights the film’s remarkable animation, which is the aspect that promises to really make “The Last Wish” stand out from its competition.

“Puss in Boots: The Last Wish” will be the second DreamWorks animated movie of 2022 to blend animation styles after “The Bad Guys,” taking a leaf out of the “Spider-Man: Into the Spider-Verse” playbook. “The Last Wish” looks to borrow more than that, though. The new trailer opens with Puss battling a giant, moss-covered monster, seamlessly blending 2D and 3D animation techniques, storybook textures, shots animated at different frame rates, and even comic book-style sound effect graphics in a way that recalls so many of the visually-astonishing action scenes from “Spider-Verse.”

The trailer doesn’t slow down from there, delivering a darkly amusing montage of Puss losing his first eight lives — his comedic deaths juxtaposed with the gorgeous, painterly backdrops in each individual shot. What’s more, there’s an appealing spongy texture to much of the rest of the footage, like when Puss gets his mojo back and suits up for his next (final?) grand adventure. The film also seems to be paying a lot of attention to tone. Its color palette becomes far more subdued when Puss settles down into his unpleasant retirement at Mama Luna’s home for cats, only to shift into stylishly dark hues when a mobster-style Goldilocks (Florence Pugh) and her three bears enter the picture.

As the trailer closes out, there are glimpses of a scene where Puss and his old flame, Kitty Softpaws (Salma Hayek), face off against their enemies in a multicolored vortex that seems lifted directly out of “Spider-Verse.” Honestly, though, I don’t even care? Give me that kind of razzle-dazzle impressionism over DreamWorks’ in-house animation style and its tired focus on realism from the last 20 years (including the “Shrek” movies and “Puss in Boots”) any day.

The post The Animation in the Puss in Boots: The Last Wish Trailer Has Us Way More Excited Than We Ever Thought Possible appeared first on /Film.

/Film – ‘Slash Film: The Animation In The Puss In Boots: The Last Wish Trailer Has Us Way More Excited Than We Ever Thought Possible’
Author: Sandy Schaefer
Go to Source
June 15, 2022

‘Slash Film: The Man From Toronto Review: An Uninspired Comedy That Wastes Its Potential’