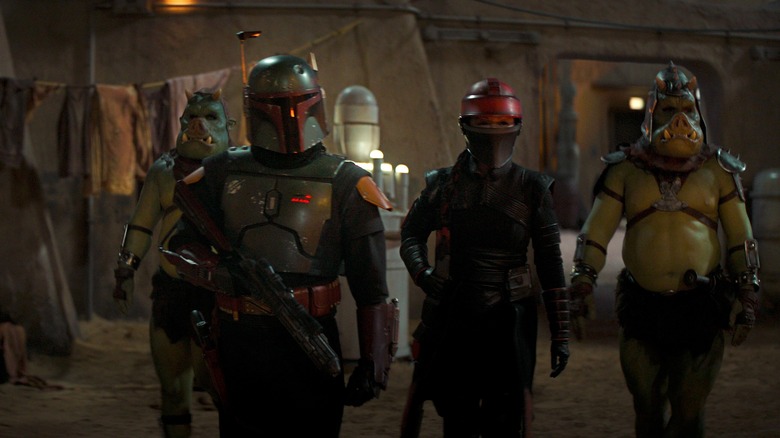 Tatooine built a reputation as a crime-ridden, no-name wasteland of a planet located in the Outer Rim of the galaxy, light-years away from anything interesting. Well, that’s what “Star Wars” wants us to think, anyways. The reality, however, is that the desert world is home to two of the most powerful Jedi Knights to ever live (one of whom, you may remember, went on to become one of the most powerful Sith lords), a frequent stop for one of the most famous rogues/smugglers/Rebel leaders, the adopted home of yet another Jedi Knight in his years of exile, and the current base of operations for a certain bounty hunter-turned-crime lord.

The franchise may never truly reconcile that profound contradiction between Tatooine as a backwater planet everybody tries to escape from and where nothing ever happens, and Tatooine as a planet where major events of note keep occurring and is apparently the place to be, but that little identity crisis of sorts continues in “The Book of Boba Fett.” Episode 3, titled “The Streets of Mos Espa,” includes a few important world-building details to further establish its place in the “Star Wars” timeline, detailing the aftermath of Jabba the Hutt’s demise and putting a spotlight on a nefarious group of outlaws. But the latest chapter of the series also includes a blink-and-miss-it cameo from “The Mandalorian” as well, further strengthening connections between other franchise media and — once again — reestablishing Tatooine as a veritable hub of activity at the center of the “Star Wars” universe.

The following section of this article contains spoilers for the latest episode of “The Book of Boba Fett.” 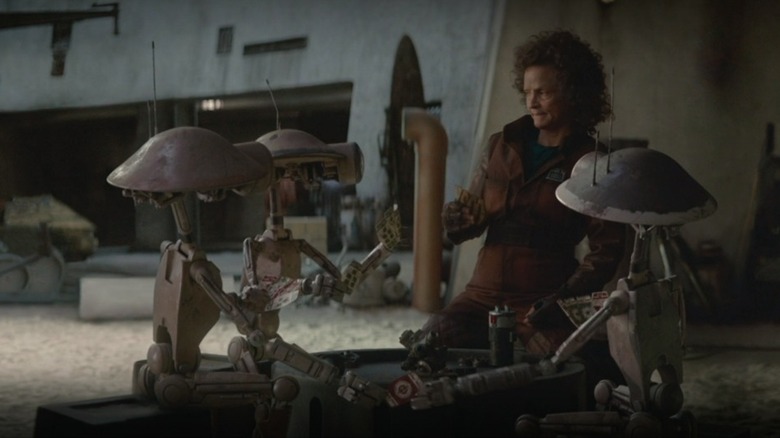 Thus far, “The Book of Boba Fett” has not missed a single opportunity when it comes to finding time and space for certain recognizable cameos by name-brand actors. The first two episodes alone have accounted for appearances by director Robert Rodriguez (actually, make that two appearances by Rodriguez) and comedian Matt Berry, and now we can add the legendary Danny Trejo, “Office Space” actor Stephen Root, and even a supporting role for “Yellowjackets” star Sophie Thatcher with the latest episode.

So how do you top all that? Easy, by bringing back Amy Sedaris! The actor originally portrayed the character of Peli Motto in Episode 5 of “The Mandalorian,” titled “The Gunslinger,” before reprising her role twice more throughout both seasons of the hit Disney+ show. As manager of her hangar in the Mos Eisley spaceport (located, you guessed it, on Tatooine), she first encountered Din Djarin (Pedro Pascal) when his ship was desperately in need of repairs. She quickly became Baby Yoda’s quasi-babysitter when the masked bounty hunter needed to venture out alone into the wild in the hopes of scrounging together enough credits to meet Motto’s steep repair price. In short, she and her motley crew of pit droids made quite an impression in “The Mandalorian,” apparently enough to bring her back for an incredibly brief reappearance in “The Book of Boba Fett.” You can check out the screenshot below (which captures her pit droids in the dastardly act of cheating at sabacc!).

Early on in Episode 3 of “The Book of Boba Fett,” the grizzled Boba (Temuera Morrison) travels through town on his way to a meeting with the Pyke Syndicate. While passing a row of Stormtrooper helmets mounted on spikes (we, uh, assume those helmets are empty), the camera lingers for a moment on a background figure and the three telltale droids following in her footsteps. Based on her companions, outfit, and general appearance, it sure looks like Boba Fett came this close to crossing paths with Peli Motto and making her the unlikely recipient of the “Ran Into Two Different Mandalorians On Tatooine By Sheer Happenstance” Award that I just made up. The timelines and locations obviously match up to make this possible, as both the original show and its spin-off take place concurrently and Motto resides well within walking distance of Boba Fett’s stomping grounds. 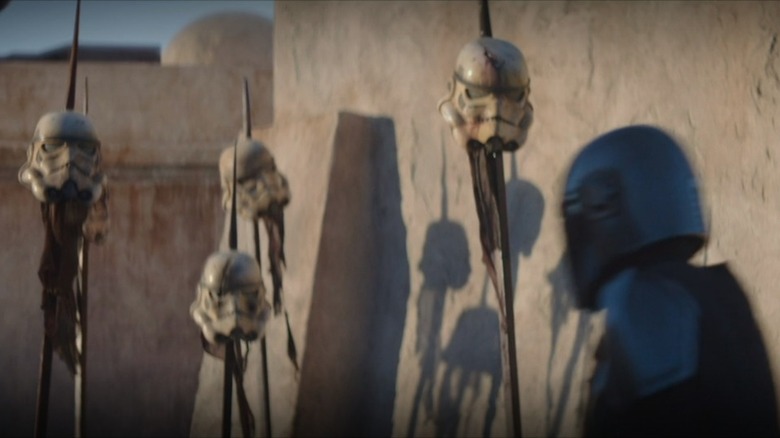 Despite the episode title, “The Streets of Mos Espa” takes the action closer to the more well-known locale of Mos Eisley (among fans, at least, if not necessarily to characters in-universe). In fact, Boba Fett wields the name of Mos Eisley like a threat later in the episode, using it to persuade Stephen Root’s price-jacking water monger, Lortha Peel, to either cut his absurd prices or move his business elsewhere, eliciting a knowing chuckle out of Fennec Shand (Ming-Na Wen) and a subsequent death glare from Peel. The shady town’s reputation, obviously, precedes it among the citizens of Tatooine.

That only makes this brief detour to connect the events of “The Book of Boba Fett” with “The Mandalorian” feel even more natural than it may have been otherwise, as the stark imagery of Boba observing Rebel victors celebrating their defeat over the Empire actually first showed up in “The Mandalorian” as well. Yes, as you can see in comparing the above screenshot from “The Mandalorian” with the one from “The Book of Boba Fett,” both Din Djarin and Boba Fett unwittingly walked by this very same location on their very different respective journeys through Tatooine. We don’t necessarily expect the rest of the series to turn into a bigger reunion special with “The Mandalorian,” to be clear, but as far as arguably “unnecessary” cameos and direct connections go? This feels as unobtrusive and natural as they get.

While it’s fun to imagine Amy Sedaris’ Peli Motto appearing regularly in “The Book of Boba Fett” from here on out and livening up the proceedings, we wouldn’t get our hopes up for that, either. We’ll just have to content ourselves with this unexpected (but much-welcomed) cameo — and who knows how many others to come in the weeks ahead.

New episodes of “The Book of Boba Fett” stream on Disney+ every Wednesday.

Read this next: The 12 Best Boba Fett Moments In Star Wars Shows And Movies

The post The Book of Boba Fett Features A Mandalorian Character Cameo You Probably Missed appeared first on /Film.