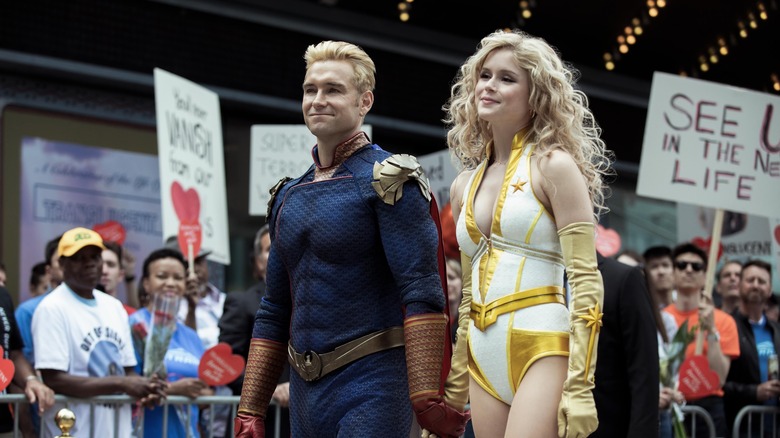 It has been a long year since the last time “The Boys” last graced our screens. And by “graced,” I mean left a long, bloody trail of violence, gore, and its usual brand of uncomfortably relevant social and political commentary that makes this darker-edged take on superheroes into a story worth telling. In the time since the second season of the acclaimed satirical show came to a stunning and gnarly end, creator Eric Kripke has kept us entertained and informed with bite-sized installments of “Vought Seven on 7.” The thinly-veiled parody of Fox News features fictional host Cameron Coleman (Matthew Edison) putting his usual pro-Vought slant on the company’s marketable superheroes/celebrities/political figures/gods. This latest edition, however, added one unexpected surprise at the very end of the clip.

Amazon dropped a brief teaser for Season 3 on us, officially announcing the premiere date for later this summer. You can check out the teaser below.

Simple, effective, and to the point. You’ve got to give credit to the creative team of “The Boys,” who have learned to make exceptional use out of little more than Antony Starr’s micro-expressions on his face. The teaser shows Homelander and Erin Moriarty’s Starlight (aka Annie January) posing for a typical photoshoot in Vought Tower, though the casual event takes on a much more sinister feel as the camera zooms in disturbingly close on Starr’s face and the supervillain’s face slowly transforms from a plastered-on smile to an unhinged frown. By now, viewers are well aware of the despicable actions the all-powerful antagonist is capable of, having most recently spent last season teaming up (and, well, hooking up) with fascist villain Stormfront (Aya Cash). A few mass deaths, general mayhem, and a beached whale later, the season came to a close with Homelander still alive, but as frightening and power-hungry as ever.

In any case, fans now have a precise premiere date to look forward to — June 3, 2022. The previous “Vought Seven on 7” segments have already teased a few new arrivals for this upcoming season, including Groundhawk, Laurie Holden’s Crimson Countess (who looks suspiciously like a play on Marvel’s Scarlet Witch), and Nick Wechsler’s Blue Hawk. Even though the teaser in the final seconds is the most news-worthy part of this latest video, we’ve included the segment in its entirety below for the obsessive completists out there.

The post The Boys Season 3 Premiere Date Set For This Summer appeared first on /Film.