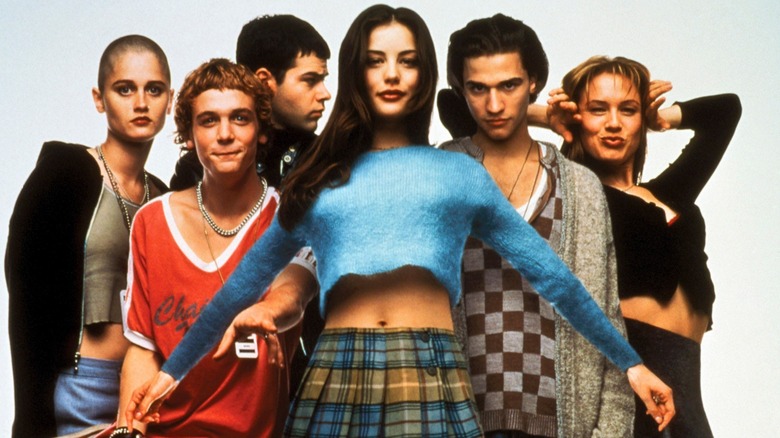 Considering its status as an undeniable box office flop (making only about $304 thousand against its $10 million budget), it’s odd that 1995’s “Empire Records” continues to maintain such a strong chokehold on popular culture. Though the prospect of working in a record store has been all but obliterated by the new millennium, the fantasy thrives on — particularly among starry-eyed young adults who yearn to be employed alongside their buddies as arbiters of taste for a (minimum wage) living. Hell, the film has even inspired a musical — though it’s been put on the Broadway back-burner indefinitely due to the pandemic.

Perhaps one of the major reasons why the film has amassed popularity over time is its star-studded cast, most of them appearing in “Empire Records” during the very beginning of their careers before gaining wider recognition, or shortly after starring in other prominent coming-of-age films. Rory Cochrane (Lucas) was already well-known for playing Ron Slater in “Dazed and Confused” two years earlier, also encouraging his then-girlfriend (and fellow “Dazed and Confused” actor) Renée Zellweger to audition, landing her the role of promiscuous Gina. Liv Tyler (Corey) had only acted in two films prior to “Empire Records,” and her status as the daughter of a literal rockstar added a tongue-in-cheek allure to her character. Robin Tunney made her mark as a misanthropic goth girl in “Empire Records” shortly before being cast in “The Craft,” and Johnny Whitworth (A.J.) had only just made his acting debut in “Bye Bye Love” earlier that year. Padded out with performances from Anthony LaPaglia, Maxwell Caulfield, and Debi Mazar, it’s clear that the enduring appeal of “Empire Records” has a lot to do with its cast — and perhaps even more so to do with the misplaced sense of nostalgia millennial and zoomer viewers projected onto the film’s solidly Gen-X characters.

Yet one would-be “Empire Records” character didn’t end up making the final cut, and the story behind his exit from the film is equal parts more debaucherous and stoic than you might imagine. Of course, we’re talking about Tobey Maguire.

Some Background: The Origins Of Empire Records 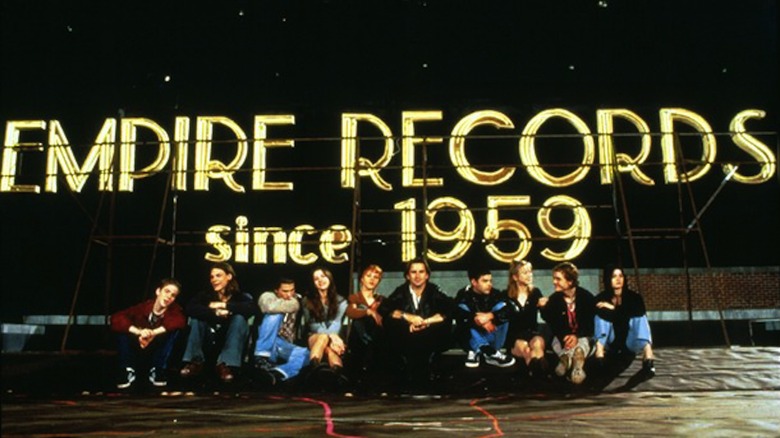 The script for “Empire Records” was written by Carol Heikkinen, who effectively mined her own experiences working at Tower Records during her teenage and college years. Originally from Phoenix, she worked at her local Tower Records outpost before relocating to California for college, where she was employed at the Sunset Boulevard location in West Hollywood. Originally titled “Empire,” the film would take place over one single day at the record store, making sure not to omit the little details. Heikkinen told Buzzfeed as part of an oral history:

“I wanted to show how the employees were a family, and how, for some of them, this minimum-wage job would be the best job they ever had. […] One guy was putting the same Dio album in every shift, and not everyone loves Dio as much as this guy did, so someone finally scratched it up.”

This real-life scenario is recreated in the scene where A.J. defiantly scorches one of Mark’s (Ethan Embry) metal CDs with his lighter, sick to death of the prospect of the album playing over the store’s speakers. Perhaps more infamously, the film’s central plot is also lifted from Tower Records lore, according to Heikkinen. As opposed to Lucas taking $9,000 from the store’s register and gambling it away at an Atlantic City casino in the hopes of winning enough money back to save Empire from a corporate buy-out, one Tower Records employee simply emptied the till at the end of the shift and showed up the next day with no explanation as to where the money went. Remarkably, he wasn’t fired — and as such, neither is Lucas. In fact, none of the staff at “Empire Records” is ever let go, not for sleeping with a promotional guest, getting stoned off of “special” brownies, or shaving their heads in the employee bathroom on the clock.

In a surprising twist of teenage cinematic fate, two days after Regency Enterprises green-lit “Empire Records,” Amy Heckerling approached the production company with her script for “Clueless.” Believing that “Empire Records” was already a surefire hit and not wanting to inundate their release schedule with a glut of teen media, Regency passed — the first and only production company to do so. The pain was certainly felt when “Clueless” amassed $56 million at the box office compared to “Empire Record”‘s measly $0.3 million. But hey, who doesn’t love an underdog?

So, How Did Toby Maguire Get Involved? 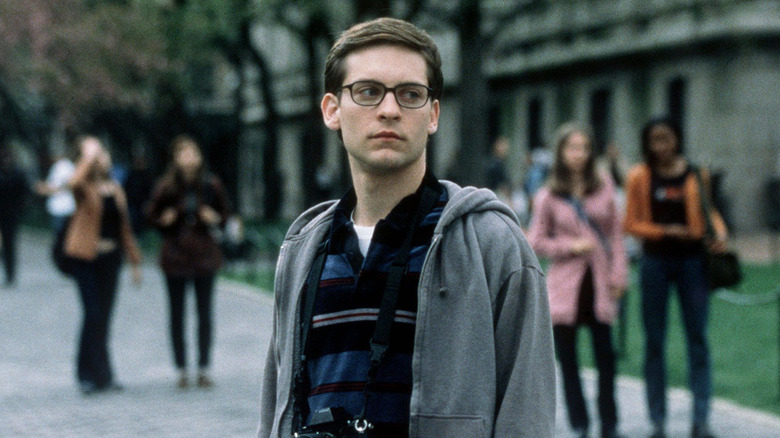 At the time, Maguire had only been cast in relatively small roles in a handful of films, including “This Boy’s Life,” “Revenge of the Red Baron,” and “S.F.W.” Maguire’s friend Whitworth was in a similar spot in his career, yet both found their way into the running for a role in “Empire Records.” Maguire was originally set to be cast as either Lucas or Mark, losing out on the latter when the then more-established Embry was ultimately placed in the role. This meant that Whitworth and Maguire were both vying for the part of Lucas at the same time — as we all know, Cochrane ended up snagging the role, and Whitworth took the part of A.J. Promised to be given a role eventually, Maguire was shuttled off to Wilmington, North Carolina for shooting anyway—without a character and, perhaps most palpably of all, without a purpose.

In a somewhat disturbing connection, the set of “Empire Records” would be built in the same facility where “The Crow” was filmed — a production which notoriously culminated in the accidental death of Brandon Lee on set. Thankfully, a tragic accident isn’t what drove Maguire away from “Empire Records” — but what did might be seen as just as bizarre. 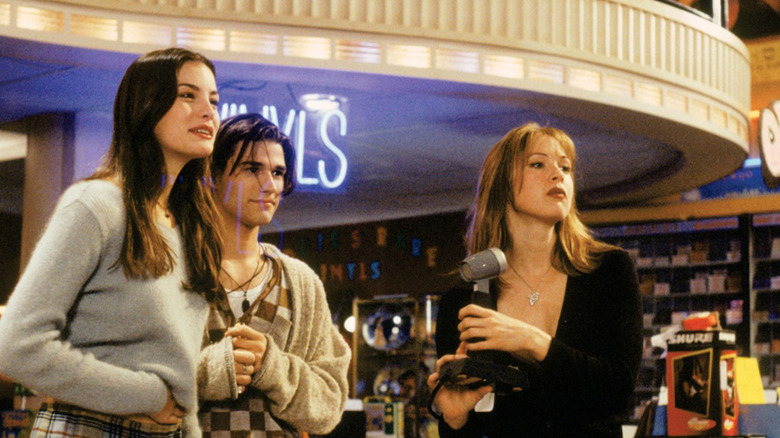 That’s right — a potent trip on hallucinogens is what’s speculated to have taken Maguire out of the running for “Empire Records.” Though that sentence certainly sounds scandalous, it was actually the product of a chill, laid-back environment and open communication between the cast and director Allan Moyle on location in Wilmington.

“While the set was prepared, the cast — which was to include Tobey Maguire, who’d been promised a part of some sort — began to rehearse and settle into their characters,” according to the Buzzfeed oral history. “Each cast member was put up in a duplex on the beach; no one was more than a five-minute walk from anyone else. Moyle hosted huge dinners at his house on a nightly basis, where his two standard poodles would dart in and out of the action. He instituted a morning Pilates session (years before Pilates was even close to cool), during which several members of the cast would take drags off their cigarettes between poses.”

As a result, most of the cast members developed a friendly rapport — an element that was later reflected in their “Empire Record” performances. However, this escalated from a few puffs during morning Pilates to mushrooms with a side of General Mills. Or, at least, that’s what’s speculated to have been the death knell for Maguire’s involvement:

“They all took mushrooms together; weed was omnipresent. Maguire showed up, felt aimless, may or may not have consumed a psychotropic drug, and somehow ended up in the basement of Moyle’s beach house eating a giant bowl of cereal. Moyle found him there, they talked for several hours, Maguire asked to go back to Hollywood to figure his life out and write a screenplay. Moyle agreed to buy it; Maguire returned to Hollywood—and, as far as Moyle knew, never wrote the script. But two years later, he was the star of The Ice Storm; eight years later, he was Spider-Man.”

Clearly, Maguire’s career didn’t suffer for not being involved in the would-be teen hit. Yet one can’t help but imagine what an “Empire Records” could have been had the actor remained—particularly if psychedelic trips continued to occur. And who knows, maybe one day he’ll finish that script after all!

It’s also worth noting that Maguire is far from the first celebrity to nearly snag a role in the cult classic: Billie Joe Armstrong nearly took the role of Berko from Coyote Shivers, and Angelina Jolie was almost cast as Deb, save for the fact she would have eaten every other burgeoning actor alive (but thank goodness she saved that energy for “Girl, Interrupted”). Despite who did or didn’t end up gracing the screen in “Empire Records,” one thing remains true: it’s a perfectly imperfect gem of a film just as it is.

The post The Cult-Classic Movie That Nearly Starred a Young Tobey Maguire appeared first on /Film.

‘Slash Film: Under The Radar: The Most Underrated Movies, Performances, And Moments Of 2021’