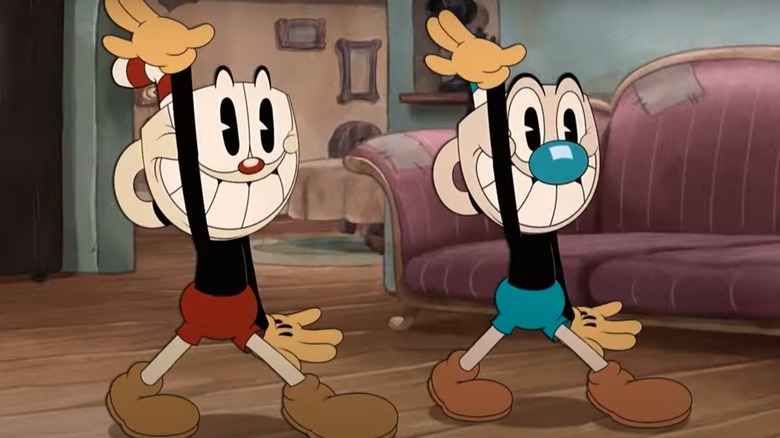 If the actual news isn’t weird enough for you, or you want to feel like you’re on an acid trip, Netflix has a new trailer for the second season of “The Cuphead Show!” Let’s just say that the exclamation point at the end of the title is very much justified. If you’ve yet to see it, the series is based on the classic Fleischer rubber hose-style animation, and was adapted from the critically acclaimed video game “Cuphead.” You see those two guys with cups for heads and large teeth in the picture above? Those are the lead characters Cuphead and Mugman, and they’re the least bizarre thing you’re going to see in the trailer.

The first season of the show had 12 episodes, and the streamer has ordered 48 episodes total, so you’ll have a lot of trippy watching to do. Last season the guys (cups?) are paid a visit by their buddy Chalice, who sort of got them thrown in jail. This season she’s back, and she’s ready to take them on an adventure involving pirates and a land of candy. Oh, and they’re still battling The Devil, so there’s that.

Do You Want To Feel Like You Just Took A Handful Of Drugs?

The weirdness of this show is really wonderful, but don’t expect to be able to describe the trailer to anyone without sounding like you had a few too many martinis at lunch. The land of sweets seems to have a giant monster with candy cane teeth, and the ship they end up on is run by a pirate who is in love with a sea monster of some kind — who is trying to kill him. The Devil isn’t happy with our little drinking vessel friends, and calls for his “finest demons” to take them down. The demons his minions bring are … something.

The voice cast for “The Cuphead Show!” includes Tru Valentino (“The Rookie”) as Cuphead, Frank Todaro (“Transformers: Prime Wars Trilogy”) as Mugman, Wayne Brady (“Whose Line Is It Anyway?”) as King Dice, Grey Griffin (“Batman: Arkham City”) as Chalice, Joe Hanna (“Robot Chicken”) as Elder Kettle, and Luke Millington-Drake (“Best Friend Fix”) as the Devil. Here is a synopsis of the Netflix show:

“‘The Cuphead Show!’ follows the unique misadventures of the impulsive Cuphead and his cautious but easily swayed brother Mugman. Through their many misadventures across their surreal home of the Inkwell Isles, they’ve always got one another’s backs. The new series will expand on the characters and world of Cuphead, with an animation style inspired by the classic Fleischer cartoons from the 1930s.”

‘Slash Film: How One Of Michael Scott’s Jokes On The Office Ended Up Costing $60,000’