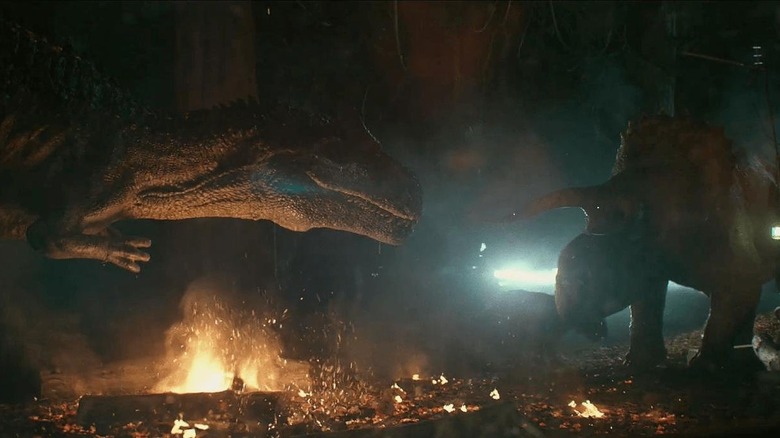 The Movie: “Battle at Big Rock”

The Pitch: What would happen if dinosaurs and average humans living out in the real world were suddenly forced to co-exist? That’s the question that the official “Jurassic World” short “Battle at Big Rock” aims to answer. We’re not talking about people working at a theme park gone wrong who are at least semi-prepared for the notion of an encounter with a dinosaur. No, we’re talking about people who are just trying to go about their lives when, suddenly, something from 65 million years ago decides to mess up their little family outing. That’s what we have going on here and that is new territory for the franchise.

Director Colin Trevorrow, who helmed 2015’s “Jurassic World” and successfully relaunched the franchise after a 14-year break, returned to the director’s chair for this year’s “Jurassic World Dominion.” The film picks up in the aftermath of 2018’s “Fallen Kingdom” and sees dinosaurs now out in the world making life difficult for regular people. But before he delivered the finale to this current trilogy, Trevorrow decided to put together a 10-minute short film in the form of “Battle at Big Rock” that would give audiences just a taste of what’s to come.

The short sees a family in the woods on a little community camping trip, enjoying a nice night in the privacy of their RV. Then a Nasutoceratops and its child crash the party which, aside from getting into a cooler, is more majestic than it is terrifying. Everything changes when an Allosaurus also crashes the party though. The two dinos duke it out before the Allosaurus sets its sights on the RV with the family trapped inside. It is, in a word, chaos. The kind of chaos Ian Malcolm tried to warn everyone about all those years ago.

For a short film that didn’t really generate any money, it looks utterly fantastic with some of the better visual effects we’ve seen in the new trilogy. Period. The action is tense and, somehow, with very little time, Trevorrow manages to deliver a believable dynamic with these new characters, who end up being characters the audience might like to spend more time with. This short was seemingly delivering on the promise of “Jurassic World: Fallen Kingdom.” That movie was a total mess, but if it lead to an entire movie filled with this type of action? Perhaps it was all worth it.

Unfortunately, that’s not how it played out. “Dominion” hardly resembles a feature-length edition of this short film, trading in the compelling concept of dinosaurs once again ruling the Earth for something more convoluted. For those who are feeling let down by the latest entry in the “Jurassic” series, “Battle at Big Rock” delivers the thrills I feel so many of us were looking for. Between this and the prologue that ended up being cut from the movie, there are at least 15 minutes of great stuff that was cooked up heading into the finale of this trilogy. Why Trevorrow and Co. didn’t continue to chase those ideas will baffle me eternally. But this short helps to ease the pain and offers a window into what could have been.

The post The Daily Stream: Battle At Big Rock Is the Jurassic World Sequel That Should Have Been appeared first on /Film.

/Film – ‘Slash Film: The Daily Stream: Battle At Big Rock Is The Jurassic World Sequel That Should Have Been’
Author: Ryan Scott
Go to Source
June 16, 2022