Where You Can Stream It: Tubi

The Pitch: Back in 1990, Terry Semel, the president of Warner Bros., felt that the company’s cartoon department was running low on energy, and aimed to solve the issue by ordering a new series — à la the successful 1984 series “Muppet Babies” — that would star youthful counterparts to recognizable Looney Tunes stars. At the same time, Steven Spielberg had been shopping around an idea to produce his own animated series in the spirit of Looney Tunes. Kismet. Amblin and Warner Bros. constructed “Tiny Toon Adventures,” a Looney Tunes for the ’90s, complete with self-aware gags, rich characters, and a bizarre mythology all its own. The success of “Tiny Toons” not only revitalized the WB animation department, but more or less birthed a brand new era of Spielberg-produced animation for Warner Bros. “Tiny Toons” would — directly and indirectly — spawn shows like “Batman: The Animated Series,” “Animaniacs,” and “Pinky and the Brain.” Eventually, a distaff studio, Kids’ WB was born to handle the blocks of quality programming now provided in massive quantities.

“Tiny Toons” pushed out the ship, singing a shanty. “Animaniacs” eventually took the helm and led the ship into the waters of popular consciousness, sprinkling catchphrases into the water the whole way. But it was the Amblin-backed, Bruce Timm and Paul Dini created “Freakazoid!” that turned to the crew, passed around a barrel of grog, and promised a doubloon for anyone who could find the white whale. I think I lost control of this nautical analogy, but take my meaning to be “Freakazoid!” is handily the best show of this lot, the strangest, the funniest, and proved to be the most important in dictating animation trends moving forward. 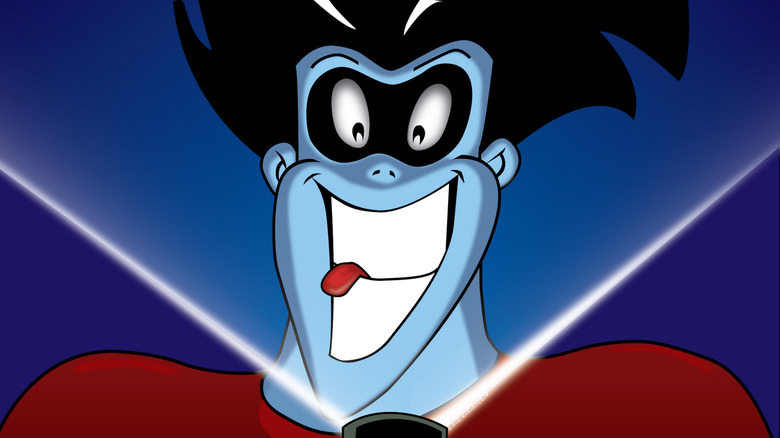 In the 1990s, kids’ animation was getting … weirder. Thanks to the success of oddities like “The Ren and Stimpy Show” and the rise of Liquid Television on MTV, more surreal material was being tried across the spectrum. It certainly didn’t hurt that “The Simpsons” was altering the entire animation landscape into something more adult and sardonic, ultimately dictating the tone of the decade that followed its premiere. This was a welcome change of pace for kids who had been raised in the gross and brazenly commercial world dictated by Hasbro and its 30-minute toy commercials from the ’80s. In the ’90s, humor became more absurd, reference-heavy, and self-aware. Deconstruction was the word of the day. And Saturday Morning certainly didn’t avoid the trend.

It should also be noted that superheroes — as the cinema landscape dictated — were not yet big business. The special effects needed to visualize a comic book panel in live-action were too expensive a risk on any characters beyond cultural staples like Superman and Batman, and it seemed that only those characters would be permitted success. Beyond those two, the 1990s were a time when the “boring” commercialized tropes of comic books were being aggressively satirized in shows and comics like “The Tick,” “The Flaming Carrot,” “Darkwing Duck,” “Bananaman,” “Too Much Coffee Man” and Powdered Toast Man from “Ren and Stimpy.”

Into the middle of this spooferhero/Liquid Television/Amblin-backed/Bruce Timm-inflected milieu came “Freakazoid!” a sketch-based superhero comedy show about a boring teen who turned into a bizarre blue goon thanks to a glitch on the internet. The premise was pretty simple: Dexter Douglas (David Kaufman) was an unpopular 16-year-old computer geek who, after typing just the right characters into his computer, was sucked into the internet wherein he absorbed all the information. The internet in 1996 was a more rudimentary place than it is now, and the information was all pretty useless at the time. The absorption turned him into Freakazoid (Paul Rugg), a fast-talking, easily-distracted weirdo who had more interest in cracking wise than saving people. On his side were the local police chief Cosgrove (Ed Asner), Fomay the Freakadog, his mute butler Ingmar, and the Scottish computer programmer Roddy MacStew (Craig Ferguson). 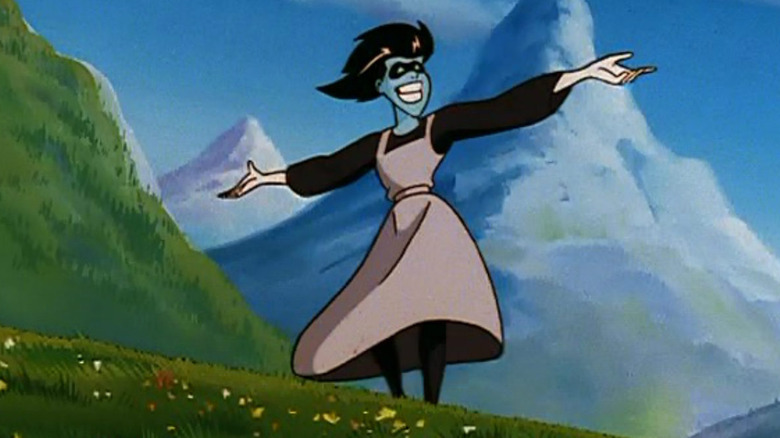 When Bruce Timm originally designed the characters for “Freakazoid!,” the thinking was that it was going to be more of a traditional superhero show in the tradition of “Batman: The Animated Series.” During production, however, it got sillier and sillier until the finished product was somewhere in the realm of “Monty Python’s Flying Circus,” complete with brief sketches, supporting players, and the most cursory glance given to stories. Still in place was a cast of colorful villains for Freakazoid to fight, although the show rarely tipped into dull and predictable punching-based superhero mayhem. There was the ultra-intelligent caveman Cave Guy (Jeff Bennett), The Lobe (David Warner), The Cobra Queen (Tress MacNeille), the cowboy minotaur Longhorn (Maurice LaMarche), the world’s most annoying fanboy Fanboy (Stephen Furst), and Freakazoid’s would-be evil twin Armando Gutierrez (Ricardo Montalbán).

When not facing off against one of these villains in the A plot, “Freakazoid!” would casually meander over to a B, C, or D plot featuring other superheroes. The Huntsman (Jeff Bennett), a woody-themed superhero who is always called into action when crime is at a very low ebb. Lord Bravery’s superheroing was often interrupted by technicalities and red tape. Toby Danger was a straight-up parody of “Johnny Quest,” complete with bad animation.

This is to say nothing of the celebrity cameos which included MPAA president Jack Valenti, handyman Norm Abram, and film critic Leonard Maltin, all playing themselves. Tim Curry would also play a villain in one episode (“They called me mad! Insane! Wendell!”), and the amazing Jonathan Harris from “Lost in Space” would enter in the show’s second season to play Freakazoid’s whiny butler. Oh yes, and, as the credits would handily point out, Emmitt Nervend would appear in every episode (a pink, frazzled caricature). With Weena Mercator as The Hopping Woman.

The Weird To Live, Too Rare To Die 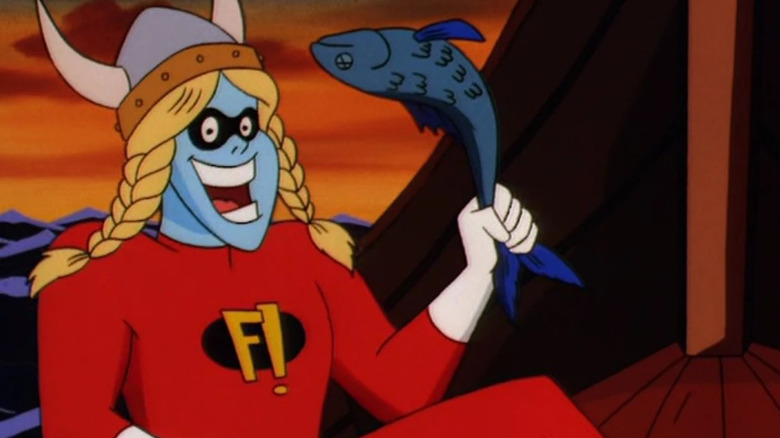 It’s no coincidence that “Freakazoid!” felt as off-the-cuff as it did. On the DVD’s special features, Dini, Rugg, and Tom Ruegger explained that the show was produced on a very tight turnaround, and a lot of Frakazoid’s own dialogue was improvised by Rugg. The creators gave no thought as to whether or not a studio would approve, or an audience would find it appealing. The makers were just trying to make themselves giggle, and what made them giggle was surreality, old musicals, and references to movies they saw the day of recording: Freakazoid’s line of “Pull da string” was taken from “Ed Wood,” a film released a mere months before the show’s premiere. In the special features, Rugg admitted that their humor might have been a little alienating. “And if there’s one thing little kids love, he said, “It’s references to ‘Hello, Dolly.'”

When it came time to make a second season, Warner Bros. insisted that the fun be reigned in a little bit, and that the show become devoted to full 30-minute episodes instead of 20 shorts. One might assume this meant more sanity, but Dini, Ruegger, and co. found plenty of ways to keep the kookiness flowing. Jonathan Harris’ presence certainly helped. Sadly, it was too strange to live. Kids didn’t jibe with its humor and stoned college kids weren’t buying the children’s toys advertised. “Freakazoid!” was canceled after two seasons.

A few short years later, in 2001, the Cartoon Network would launch a block of bizarro, nighttime programming under the banner of Adult Swim. “Space Ghost Coast to Coast” — the finest piece of Dadaist pop entertainment ever produced — led a pack that included “Aqua Teen Hunger Force,” “Sealab 2021,” and “The Venture Bros.” The thumbprints of “Freakazoid!” are all over Adult Swim, and there is no doubt WB’s antics led to the production of weirder and weirder s***.

“Freakazoid!” wasn’t so much too weird as it was a few years ahead of its time. It was a superhero show that functioned as media commentary, a slapstick play yard, and a pop culture library. Nothing will ever match its highs. It is a show for the ages.

The post The Daily Stream: Freakazoid! Will Give Your Brain a Chocolate Coating appeared first on /Film.

/Film – ‘Slash Film: The Daily Stream: Freakazoid! Will Give Your Brain A Chocolate Coating’
Author: Witney Seibold
Go to Source
May 14, 2022