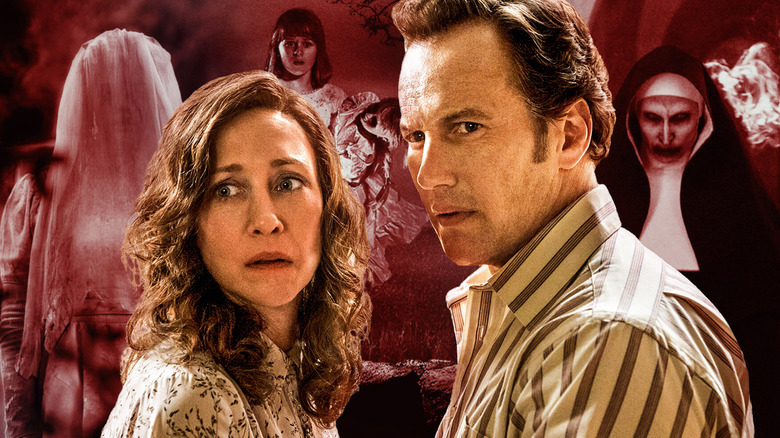 There are two major themes that link the eight films in the “Conjuring” universe. First: that the evil in this world — which exists and is often malevolent — may be combated through good Christian values, including faith, duty, and the partnership of marriage (given the Warrens’ real-life charlatanism, this theme is sort of a sticking point). The other? Evil cannot be vanquished. Evil persists. Evil is a counterbalance of good and, ironically, validates the existence of God. If he exists, so will evil, and therefore it must persist.

That’s heady stuff for a franchise that has devoted a third of its films to possessed dolls, and it’s the tenet which makes each “Conjuring” spin-off more than IP-extension. As the Conjuring-verse grows larger, it’s core argument become more potent. Since every film either reveals new spirits from the Warrens’ trove of horrors or delves further into said spirits’ origins, the scope of good and evil’s endless struggle extends backwards into history. This battle is massive. It’s relentless. It could be — for all intents and purposes — the fundamental story of life. To parse out the franchise’s relationship to recorded time is to know its weighty ideas and deeper aims. Therefore, here’s the current “Conjuring” timeline explained. 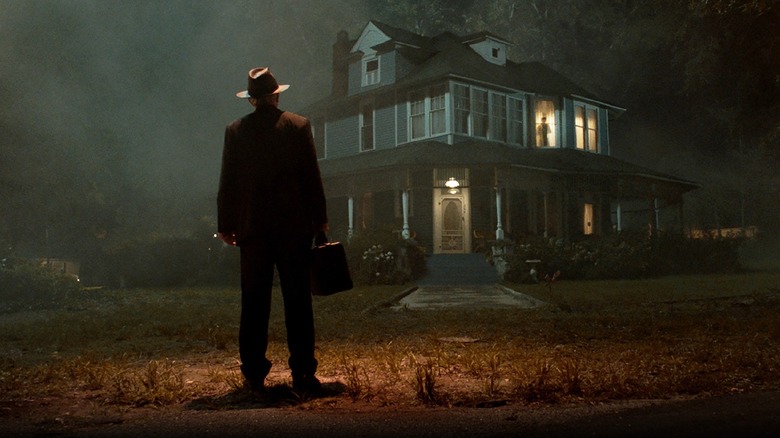 One movie missing from this list is “Annabelle Comes Home” — and that’s because it exists in a time paradox (apparently Warner Bros. was in desperate need of its own “Conjuring” universe timeline guide). More on that later! 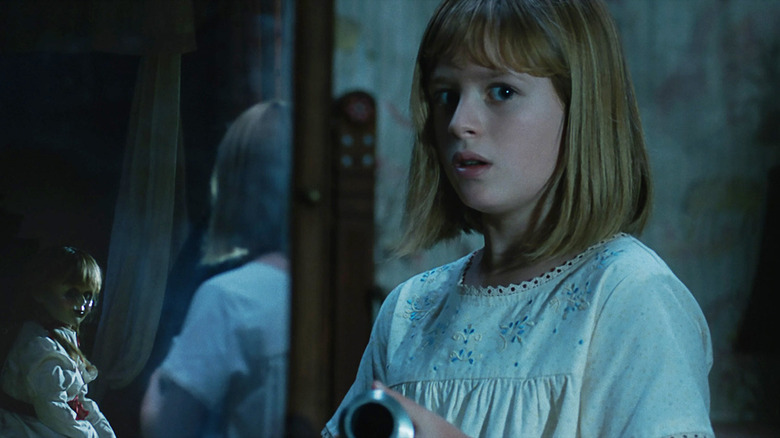 The “Conjuring” universe currently begins in 1943 — four years into World War II — with the accidental death of young Annabelle Higgins. And while David F. Sandberg’s “Annabelle: Creation” isn’t exactly haunted by the myriad tragedies of the Second World War, the subsequent haunting of a tiny Kansas farm in 1956 mirrors how the unrest and psychological pain of war weighed upon those of faith in the 1950s. To wit: the Higgins family (Anthony LaPaglia and Miranda Otto) is not only tested by their daughter’s loss, they’re also shaken by its timing — which is to say, immediately after a church service.

The subsequent terrors that are inflicted on them and the orphans they look after in the film render the house’s Christian decor suddenly sinister, as if it can’t be trusted anymore. For many who lost loved ones in the war, this sudden TK of God was common. The Warrens will, though their exorcisms and seances, come to restore the faith of many in these films. But in “Annabelle: Creation,” belief in the beyond has brutal consequences, both physical and emotional. Though the movie does jump, briefly, to 1967 (setting up 2014’s “Annabelle”), it’s the post-credits stinger which is most valuable to our viewing experience. One which sets up… 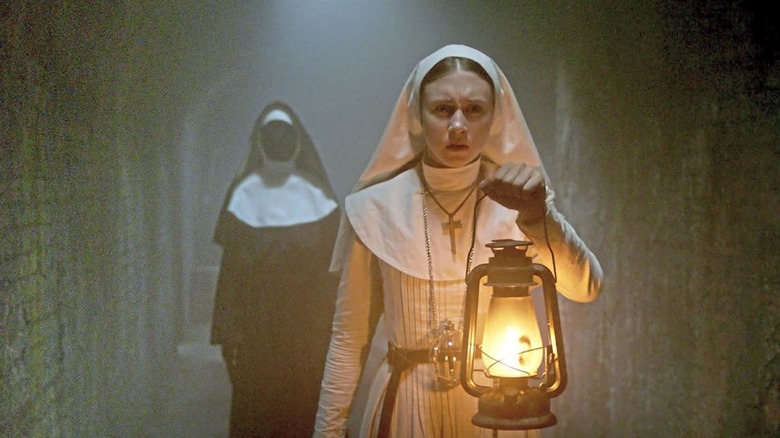 Let’s be plain: “The Nun” is not the “Conjuring” universe’s strongest film. But it benefits the most from chronological viewing since “Annabelle: Creation” ends with a set up of Corin Hardy’s chiller, which takes place in 1952, Romania, and follows Sister Irene (Taissa Farmiga), Father Burke (Demián Bichir), and local Frenchie (Jonas Bloquet) as they battle Valek, a demonic spirit terrorizing Carta Monastery. “The Nun” also reinforces a World War II-observant read of “Annabelle: Creation.” As revealed in the film’s middle stretch, it was bombing raids on Europe that unearthed Valek in the first place. So, while Hardy and writers James Wan and Gary Dauberman don’t directly ally ancient evil and the six-year war, there’s a passive implication that they’re intertwined; when men create Hell on Earth, the denizens of Hell rise up to meet them.

“The Nun” also represents the “Conjuring” universe’s most explicit conversation with the practice of Christianity. The Warrens may exorcise spirits in the name of God, but they are not formal members of the clergy. In “The Nun,” Sister Irene and Father Burke are representatives of the Catholic church who find themselves battling both evil superiors and a demonic, habit-wearing demon. It’s Frenchie, however, who pushes the “Conjuring” timeline forward here — it is revealed at film’s end that he, in 1968, is the older man whom Ed and Lorraine exorcise at the beginning of 2013’s “The Conjuring.” But before we get to the 70s, there’s still the matter of Annabelle to deal with. 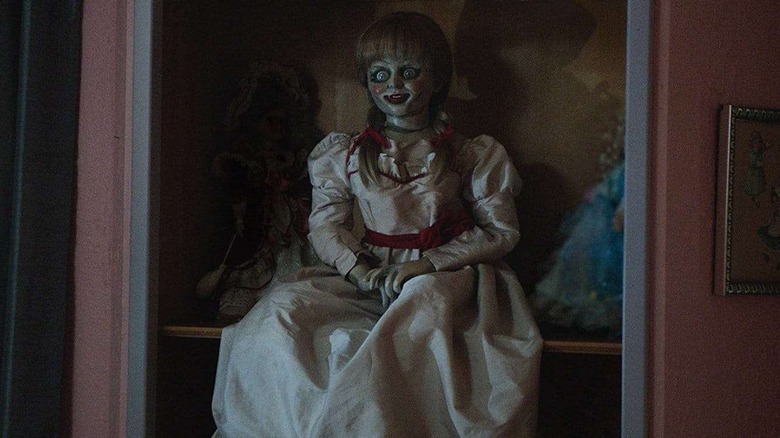 In many ways, “Annabelle” is the least ambitious “Conjuring” film. It’s a straightforward prequel to James Wan’s original that doesn’t add new evils to its universe, and doesn’t expand the timeline any further than one year prior to the prologue of “The Conjuring.” Furthermore, the horrors it depicts are less rooted in events of historical significance or their time period than the majority of “Conjuring” entries.

Given all that, what is worth mentioning about “Annabelle”? For one: that any single scene in the “Conjuring” universe can be an anchor for multiple storylines. No less than three movies in the series have returned to Ed and Lorraine taking possession of Annabelle, a small moment so rife with buried menace that it establishes an ethos that almost all the “Conjuring” movies have come to follow. For another, this is the first appearance of Father Perez (Tony Amendola), who returns in 2019’s “The Curse of La Llorona.” 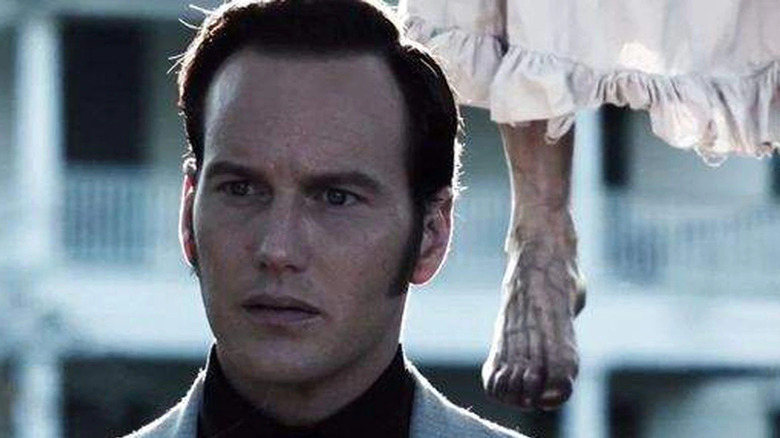 Aside from its 1968-set cold open, “The Conjuring” is almost entirely set in 1971. This very first entry in the horror movie franchise is rooted in real-life history with its recreation of the Perron farmhouse hauntings, which took place in Harrisville, Rhode Island (current residents and visitors to the home claim it’s still haunted, by the way). The spirit who haunts the home — Bathsheba Sherman — was also a real person who may or may not have been unfairly persecuted for being a witch (an American tragedy if there ever was one). Since ambiguity doesn’t make for a good villain, the Bathsheba Sherman of “The Conjuring” is depicted as a wholly evil ghost with a nasty habit of sacrificing children to Satan. The movie also goes out of its way to establish Annabelle’s evil, so much so that there’s strong connective tissue between “The Conjuring,” Annabelle, and the next (and most underrated!) entry in the film franchise. 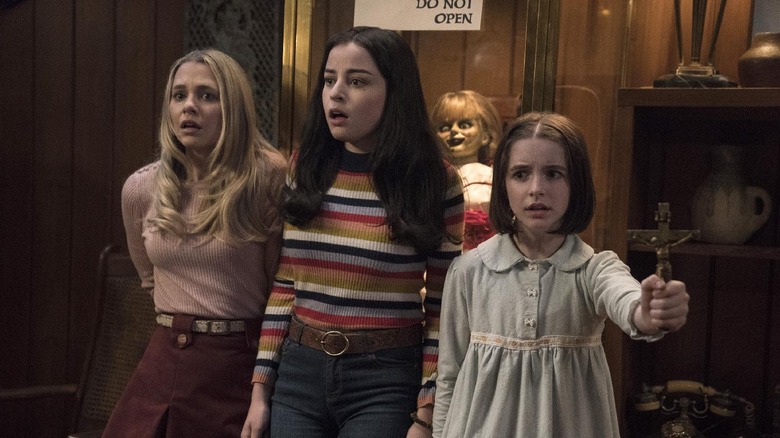 Here’s where the timeline gets confusing: “Annabelle Comes Home” begins in the same place as “The Conjuring” (1968) before jumping forward one year in time (1969). However, the movie was billed as being set one year after the events of “The Conjuring,” and the Warrens’ artifact room contains the haunted music box that was placed there by Ed at the end of “The Conjuring” (1971). Essentially, this means that “Annabelle Comes Home” is set both in 1968/9 and 1971/2. Let’s just blame it on the demons.

There’s a funny thing that happens when you binge movies released over many years in the spans of weeks or days: time mutates. You start to see these movies not as they’re meant to be seen (divorced from time, running 90-180 minutes) but as they actually present themselves (subject to time, 90-180 minutes of an eight hour whole). This was the genius of Christian Marclay’s 2010 “The Clock,” a 24-hour video installation which featured clocks or timepieces corresponding to the actual time and hour an audience was watching it; time was impossible to avoid.

All of which is to say that “Annabelle Comes Home” reveals some dark stuff about the Warrens’ timeline when you witness it chronologically — namely that they’re always haunted, seemingly out of nowhere. The film opens on the couple taking Annabelle into their possession only to have their car break down by a graveyard, get visited by ghosts, and nearly die due to the possessed doll’s interference. Just reading that is exhausting! The toll that battling the paranormal takes on the Warrens is firmly established here and becomes clearer as the series goes on, especially during “The Conjuring: The Devil Made Me Do It,” but for now we leave the Warrens to visit Los Angeles and encounter… 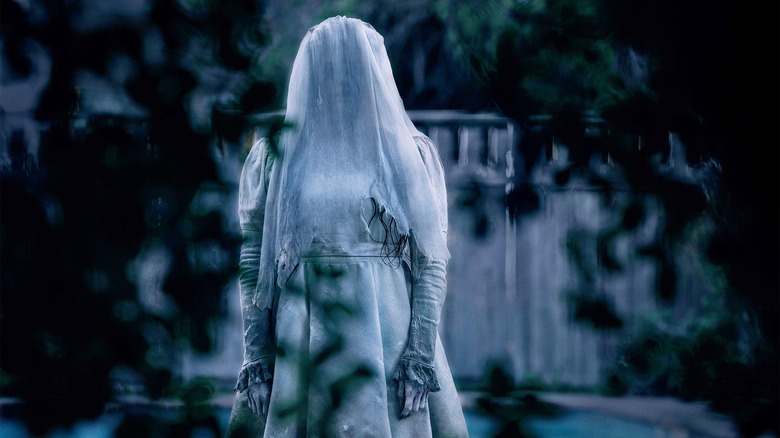 I’m not sure if “The Curse of La Llorona” was, in fact, cursed by the legendary Weeping Woman — but it sure had the deck stacked against it. The 2018 film premiered to a mixed reception at SXSW, opened against “Avengers: Endgame,” and was the lowest grossing “Conjuring” film pre-pandemic (though still undoubtedly a commercial success, earning $123 million against a nine million dollar budget). By design, the film feels less connected to the “Conjuring” movies at large. Though it too roots itself in history, the inspiration it draws from is more mythic than factual (in this instance — the legendary ghost of Latin American folklore) and the thematic resonance is muted for an extended plethora of jump scares.

The connection to the “Conjuring” movies? Father Perez, who last appeared in 2014’s “Annabelle.” Perez is able to link the cases of La Llorona and Annabelle both because of their personalities and the sheer force of his presence. It’s a minor connection, but a necessary one. And thankfully, the series rights both its thematic and storytelling ships with its next entry. 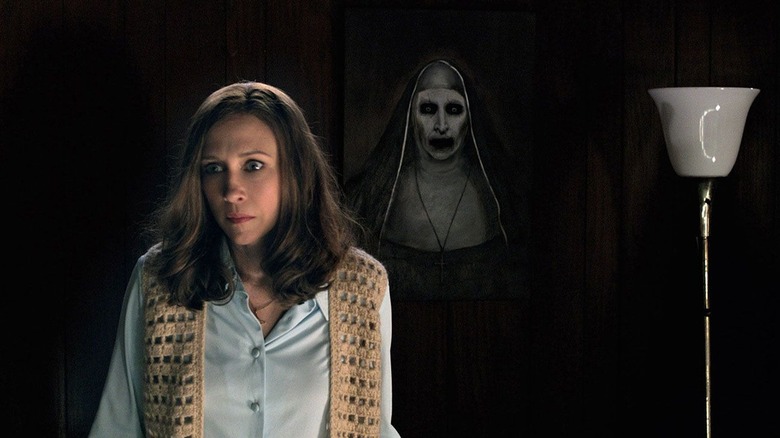 “After everything we’ve seen, there isn’t anything that rattled either of us anymore…but this one? This one still haunts me.”

Those are the words uttered by Lorraine Warren which open James Wan’s “The Conjuring 2,” before its protagonists encounter the infamous horror of Amityville (and find Valek, the high-ranking demon from “The Nun,” to be responsible). It’s the Amityville case that makes the Warrens both famous and infamous. It’s the case that makes them part of history. As such, it’s a case that forces both them and the franchise to confront both larger and more terrifying spirits and the boundaries of what their faith can weather.

For the first time, the Warrens’ legitimacy is questioned on national television. Their marriage is also tested as they investigate the hauntings in Enfield. And, in both instances, we see the forces of evil target their spiritual practices directly, be it their belief or vowed commitment to one another. If any movie in the series makes it clear that Evil and God are at war with each other, it is this one. What’s more, the one-two punch of “Annabelle Comes Home” and “The Conjuring 2” set up the surprisingly weighty final entry to date in “Conjuring” series — one that anchors itself to a dark era in American history. 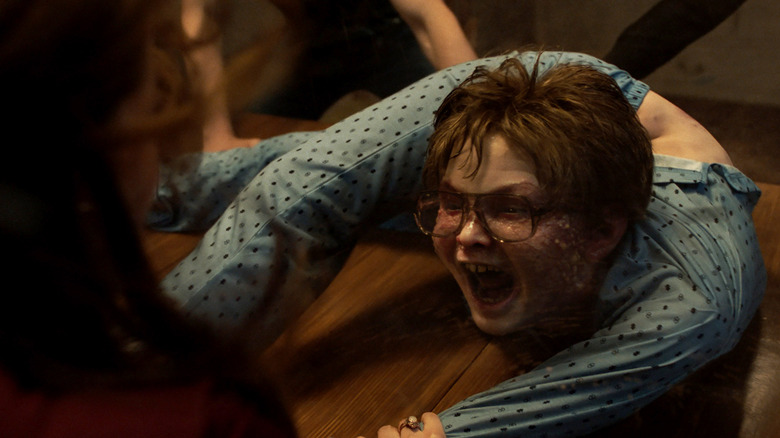 “The Conjuring: The Devil Made Me Do It” is the darkest “Conjuring” film. That’s a bold claim given the relative lack of lightness that marks the other entries in this franchise, but it’s well-earned. Michael Chaves’ (returning from “The Curse of La Llorona”) entry into the stories of Ed and Lorraine Warren opens with an eight-year old being showered in blood, stabbing his father, and Ed having a life-threatening heart attack. It wears its R-rating on its sleeve and how.

“The Devil Made Me Do It” purposefully bears the weight of the entire franchise to date. Annabelle is present. Ed is confined to a wheelchair. The possibility of possession as a justification for murder is quite literally put on trial in a court of law. And even when the film abandons this circumstance-stacking for more standard jump-scare fare, the cost of waging war against demonic evil — and of choosing to believe in the tenets which make that battle possible — feels overwhelmingly present. “The Conjuring: The Devil Made Me Do It” confirms there’s nothing fun about being the Warrens. It suggests there are cases to come (two spinoffs, “The Nun 2” and “The Crooked Man,” are currently in development.) More than anything, it reminds us that if the Warrens ever fall pray to the forces that would see them dead, the battle of God and evil would continue without them. Now that’s scary.

Read this next: ‘The Conjuring: The Devil Made Me Do It’ Ending Explained: The True Case Of Arne Johnson

Screen Anarchy : THE MATRIX RESURRECTIONS Trailer Goes Back to Where it All Started

‘Slash Film: Here’s Why Shang-Chi And Eternals Might Not Get Released In China’