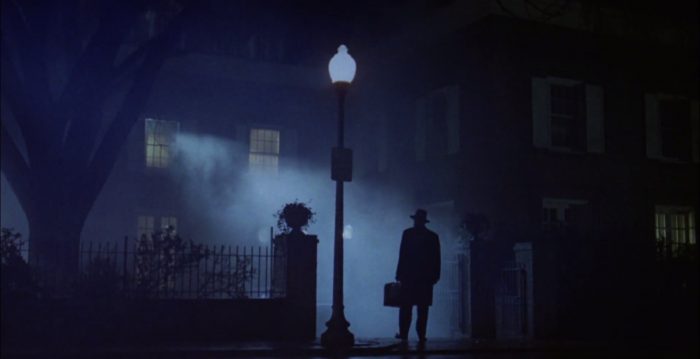 Buried at the end of a recent Deadline article comes the news that a reboot of William Friedkin’s 1973 horror classic The Exorcist is being developed for theatrical release in 2021 by the folks at Morgan Creek Productions. Hang on to your holy water as we try to parse through what’s going on here.

This sentence was at the bottom of a Deadline article this afternoon, and it has sent a ripple of confusion through the horror community: “Current Morgan Creek projects include Stay Tuned at AMC, with a planned theatrical reboot of The Exorcist in the works for 2021.” Fox’s TV version of The Exorcist wrapped up its two season run back in 2017, but this is the first time we’re hearing about a feature film reboot, let alone one that might be ready for theatrical release as soon as next year.

A few years ago, Morgan Creek Productions rebranded into Morgan Creek Entertainment Group and began developing several of its library titles for reboots, sequels, or remakes. In 2015, the company explicitly promised they would never remake The Exorcist.

For the record, we will never attempt to remake THE EXORCIST

The project is not listed as one of the “in development” titles on the company’s IMDB Pro page.

I reached out to Morgan Creek for confirmation about The Exorcist reboot, but I have yet to hear back. We’ve also directly reached out to William Friedkin, the director of the original film, to see if he’s heard anything about a potential reboot. Back in 2017, Morgan Creek Entertainment Group said that ideally, the company would get the blessings of their library titles’ original creators before they move forward with new entries, so perhaps Friedkin is involved with this possible new version.

The fact that this new movie is being billed as a “reboot” and not a remake implies that it will have a direct narrative connection to the original film. But Max von Sydow, the star of the original film, died earlier this year. Actors Jason Miller, Jack MacGowran, and Lee J. Cobb have also passed away, but Ellen Burstyn and Linda Blair, who played the mother and daughter at the center of the story, are still active, so they could potentially be brought in to establish that connection. The Exorcist TV series ignored the events of the later four movies and served as a direct sequel to the 1973 original film.

We’ll update this story if we hear anything concrete from the folks we’ve reached out to. In the meantime, here’s the trailer for the 1973 movie:

The post ‘The Exorcist’ Reboot Reportedly Coming to Theaters in 2021 appeared first on /Film.

The best way to pay for a lovely moment is to enjoy it.