This fall will bring the story of scandalous televangelist Tammy Faye Bakker in a new biopic starring Jessica Chastain. The Eyes of Tammy Faye will chronicle the inspiring rise and traumatic fall of the woman who created the wildly successful Christian news program The PTL Club with her husband Jim Bakker before a sex scandal destroyed their empire. The first photos from the movie have surfaced, and Jessica Chastain truly looks almost unrecognizable as the public figure. 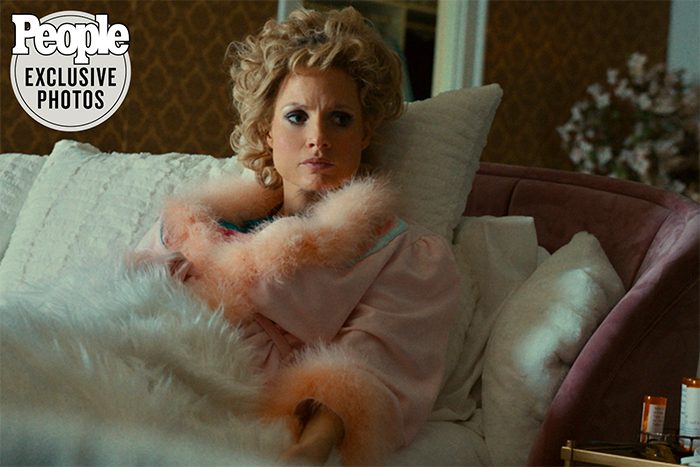 People has our first look at The Eyes of Tammy Faye Bakker, featuring Jessica Chastain covered in impressive make-up and prosthetic pieces to transform into the Christian TV personality. Joining her is Andrew Garfield, also given a transformation of his own as husband Jim Bakker.

The PTL Club turned into a multi-million dollar industry, which included the creation of a theme park that was dubbed a Christian version of Disneyland, before it suddenly came crashing down. In 1987, it was discovered that Jim Bakker had a sexual rendezvous with a woman named Jessica Hahn, who was not only paid hundreds of thousands of dollars in hush money but also claimed that she had been sexually assaulted by the preacher back in 1980 when she was 21 years old. 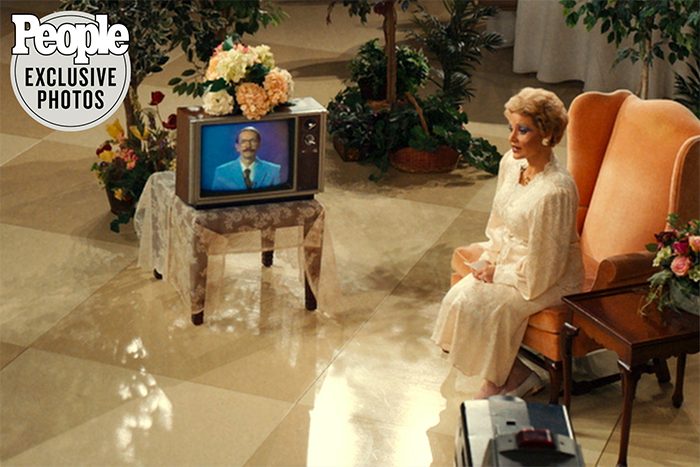 It sounds like The Eyes of Tammy Faye aims to provide some new perspective on Tammy Faye Bakker, a woman who was disparaged and mocked in news and late night television. Jessica Chastain has been researching Bakker’s life and story for nearly 10 years. The actress said:

“Here’s a woman that I had an idea of because of what I was fed about her. Even the thing about the mascara running down her face. There is not one picture of her with mascara running down her face in reality. But people were always making her into a clown and punishing her for the mistakes of her husband, which all throughout history women have been the victim of, atoning for the sins of men.”

In addition to the research, Chastain sat in the make-up chair for four hours each day in order to become Tammy Faye Bakker. She recalled the work done by make-up artists Linda Dowds, Stephanie Ingram, and Justin Raleigh:

“Every moment, I had something on my face. I have a dimple in my chin that she didn’t have, so we would seal that up. Her face was more round than mine, so I would have things on my cheeks. Their expertise just helped me so much with my confidence in playing her.” 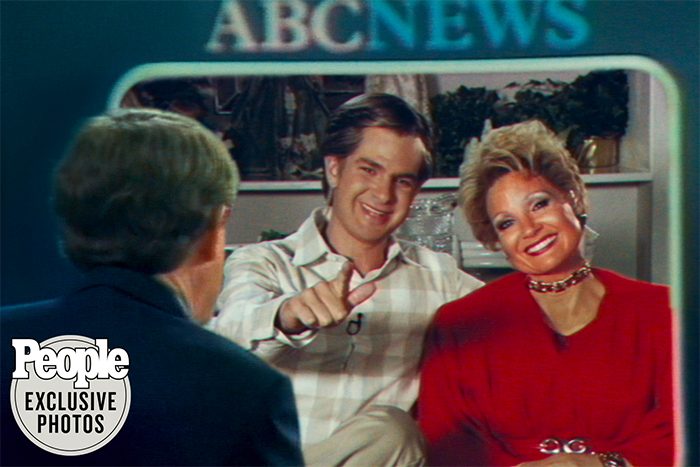 Along with that confidence came understanding and respect of Tammy Faye Bakker’s place, both in faith and her life. Chastain was especially focused on Bakker’s support of the LGBTQ community as a female televangelist. The actress recalled an interview Bakker conducted with Christian gay minister and AIDS patient Steve Pieters at a time when the disease was a hot topic that caused much bigotry against the LGBTQ population. Chastain said:

“That’s really why I wanted to make the movie. Because in a time when people were even afraid to say AIDS, we had this female televangelist. And she was a minister too in her own right. She wasn’t just the preacher’s wife, the singer. The interview is phenomenal. It’s so beautiful and loving. And it’s such a huge turning point in terms of what people could associate God’s grace with, because I feel like she was filled with grace.”

The Eyes of Tammy Faye, which is surprisingly directed by The Big Sick and The Lovebirds director Michael Showalter, will be released in theaters by Searchlight this fall on September 17, 2021. That makes it a prime candidate for awards consideration when the time comes, and if these first look photos are any indicator, this could very well be an Oscar-worthy performance from Jessica Chastain. You can see more photos from The Eyes of Tammy Faye at People.

The post ‘The Eyes of Tammy Faye’ Finds Jessica Chastain Looking Unrecognizable as the Fallen Televangelist appeared first on /Film.