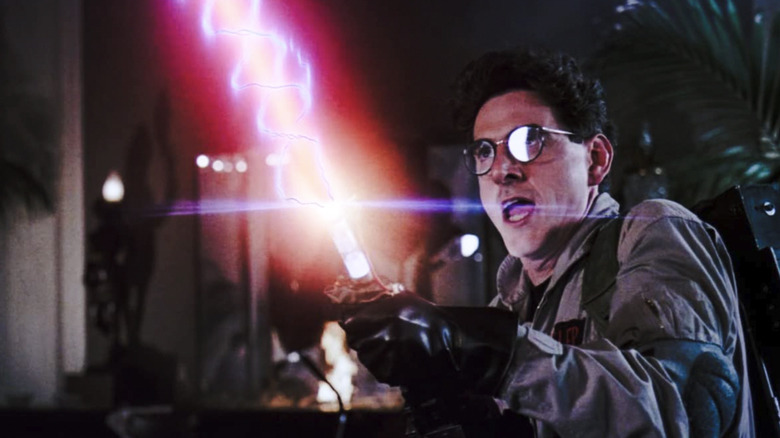 The original “Ghostbusters” is arguably one of the most quotable movies of the 1980s – which is strange to think about, considering it’s a movie about a bunch of slacker scientists who sort of stumble their way into discovering a way to capture ghosts in New York City. Among the film’s many memorable lines is “don’t cross the streams,” a crucial piece of info that Egon Spengler (Harold Ramis) gives to his ghostbusting pals and which comes back to save the day at the end of the film. (I am genuinely sorry if I just spoiled “Ghostbusters” for you, but the movie is almost 40 years old and we have to draw a line somewhere.)

You might think a component as integral to the movie’s climax as “don’t cross the streams” would be all over every draft of the script, but that’s apparently not how it happened. According to co-writer and co-star Harold Ramis, that moment was not in the shooting script – it was worked out on set while filming the big confrontation with Gozer the Gozerian.

According to the “Ghostbusters” commentary (via Film School Rejects), director Ivan Reitman says that during production of the movie’s final scene, the ending was not yet fully locked into place. Mental Floss says that co-writers Harold Ramis and Dan Aykroyd “were unsure how to get the Ghostbusters out of the final scene alive, and because the nuclear technology behind the proton packs was ‘explained’ with humorous techno-babble and mostly left up to the audience’s imagination, they came up with the idea of crossing the streams — an act which would somehow cause a cataclysmic shift in our dimension.”

Film School Rejects says that on the commentary, Reitman recalled that the “crossing the streams” notion initially came up elsewhere in the script but was jettisoned until they used it as the key to unlocking how the ending would work. Once that decision was settled upon, Mental Floss says the filmmakers “added in some foreshadowing of the event to an earlier scene” so it would pay off during that last standoff. That earlier scene must be the hotel ballroom sequence above, when Ramis’s Egon Spengler character sets up the stakes for what could happen if the proton pack streams accidentally get crossed.

“I Have A Radical Idea”

The fact that such an important plot point could be slotted in at the last minute is a testament to how little time “Ghostbusters” had to go from concept to finished product. There were only 13 months from the moment Reitman received a greenlight from a Columbia studio executive to the time of the movie’s June 8, 1984 release date – and keep in mind that the script was not finished yet. One of the biggest challenges to making movies in the modern studio system is the feeling of laying down track just before the train runs over it as you’re struggling to hit a release date. Some filmmakers thrive on that kind of chaotic pressure – Christopher McQuarrie’s method for making the “Mission: Impossible” movies gives me anxiety just thinking about it – but most directors are not fully comfortable with that type of scramble.

Complicating matters even further was the fact that “Ghostbusters” was one of the very first comedies to have giant visual effects sequences. As Ivan Reitman told The Hollywood Reporter in a 2016 feature looking back on the making of the film:

We were in a constant hurricane, just trying to get everything done. There was only one big visual effects house and that was ILM [Industrial Light and Magic], and Steven Spielberg had already booked it for Indiana Jones and the Temple of Doom, so they weren’t available. Everybody else was too small for the job. We had something like 630 [effects shots]. But there was Richard Edlund, who had done Star Trek. I thought, ‘Let’s hire him and build a company around him.’ So I got Columbia to advance $5 million to Edlund to set up his own company, to buy the equipment that was necessary.

Thankfully, Reitman and his collaborators did not crumble under such immense pressure: they gracefully solved a narrative problem and managed to create one of the film’s most memorable lines in the process.

Read this next: Ray Parker Jr. On The Legacy Of ‘Ghostbusters’, Passing On ‘Spaceballs’ And His Wild Oscars Performance [Interview]

The post The Famous Ghostbusters Moment That Was Not in the Original Script appeared first on /Film.

/Film – ‘Slash Film: The Famous Ghostbusters Moment That Was Not In The Original Script’
Author: Ben Pearson
Go to Source
September 15, 2021

Jason Lives in This Cool Desk Lamp For Franchise Lovers