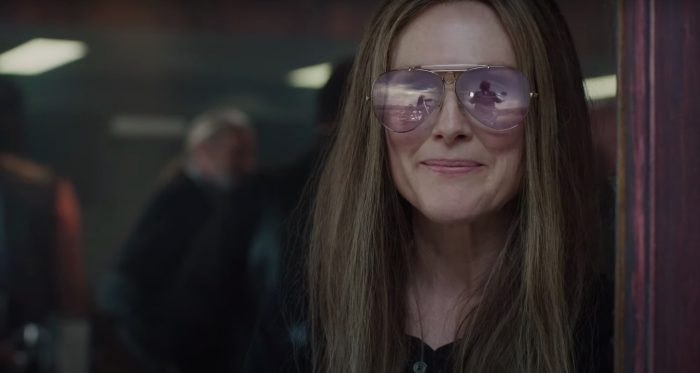 Gloria Steinem is a feminist icon so multifaceted that she needs more than one actress to portray her. So says The Glorias trailer, which stars Julianne Moore, Alicia Vikander, Lulu Wilson, and Ryan Keira Armstrong as Gloria Steinem, the envelope-pushing activist at the forefront of the second-wave feminist movement in the 1970s. The star-studded biopic, based on Steinem’s memoir My Life on the Road, tells the life of the activist in a “nontraditional biopic” that promises to put a twist on the tired genre. Watch The Glorias trailer below.

It seems like the tired biopic genre is finally getting a dose of energy, with new spins on the biographical film like the fourth wall-breaking Tesla starring Ethan Hawke, and now The Glorias, which sees Gloria Steinem interacting with herself at various ages. The concept of several actors portraying one figure in a biopic has been done before, most notably in the Bob Dylan biopic I’m Not There, which saw the musician literally shifting personas and genders. In The Glorias, it’s a little more straightforward, with Moore playing the older Steinem, Vikander playing her as a young woman, and Wilson and Armstrong playing the activist in her childhood, but the scenes of the four of them chatting and interacting is promising.

Here is the synopsis for The Glorias:

Journalist, fighter, and feminist Gloria Steinem is an indelible icon known for her world-shaping activism, guidance of the revolutionary women’s movement, and writing that has impacted generations. In this nontraditional biopic, Julie Taymor crafts a complex tapestry of one of the most inspirational and legendary figures of modern history, based on Steinem’s own biographical book ‘My Life on the Road.’ THE GLORIAS (Julianne Moore, Alicia Vikander, Lulu Wilson, Ryan Keira Armstrong) traces Steinem’s influential journey to prominence—from her time in India as a young woman, to the founding of Ms. magazine in New York, to her role in the rise of the women’s rights movement in the 1960s, to the historic 1977 National Women’s Conference and beyond.

The Glorias arrives on digital and will be streaming exclusively on Amazon Prime starting on September 30, 2020.

You are never given a wish without also being given the power to make it come true. You may have to work for it, however.