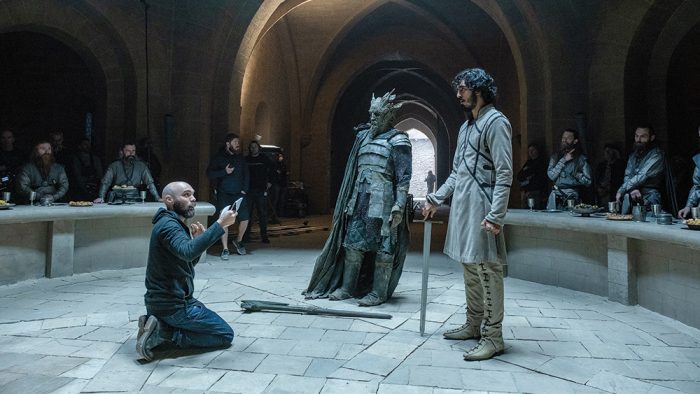 The ongoing pandemic has overturned practically every aspect of our lives… but it turns out there might have been a small silver lining when it came to The Green Knight.

Writer/director David Lowery was all set to premiere his highly-anticipated twist on Arthurian lore way back in 2020 at the South By Southwest film festival. COVID ended up interfering in a big way and the festival was subsequently canceled (it’s held annually in Lowery’s home state of Texas, which was a hotbed for coronavirus cases at the time), but this seems to have given Lowery the extra time he needed for some crucial fine-tuning and reconsideration. As he puts it, “Sometimes movies just aren’t ready.”

The extra six months of downtime appears to have been precisely the excuse Lowery needed to go back to the editing bay and improve on much that he wasn’t initially happy with. As he tells Vanity Fair:

“I just gave myself permission to dig back into the movie, unlock it, and rework the entire thing. I found the affection I needed to cut it with love in my heart instead of disappointment and hate. It’s different—it’s much better.”

Though he doesn’t go into specifics about the exact nature of the changes he made, it’s always great to see what distinctive and talented filmmakers can do when not under the oftentimes suffocating time constraints that come with making movies on any level. The Green Knight is certainly a far cry from Lowery’s excellent and underrated Disney remake of Pete’s Dragon, in tone and scale, and it’d be a safe bet that the director was able to re-edit and otherwise carry out his wishes in a way that he simply wouldn’t have been able to on a production with a bigger budget and more higher-ups to answer to.

Lowery also adds a final parting thought on just what makes his upcoming Peter Pan remake Peter Pan and Wendy different from his varied filmography to this point, which includes the indie darling A Ghost Story as well as the beautifully understated Old Man & the Gun, starring Robert Redford.

“This is the movie that I’m making in which I’m finally embracing adulthood. You don’t have to be revisionist with it—you just try to deepen it and illuminate it, and that’s what I do with The Green Knight. There’s lots of, you know, flying and sword fighting and swashbuckling, but there’s emotional stuff going on in this movie that I think I wouldn’t have been able to do had I not made The Green Knight.”

Lowery seems at peace with how things turned out and already has his eye on his projects in the future, although selfishly I can’t help but wish we could have had a chance to compare his original version of The Green Knight with the final one. Changes and second guesses don’t automatically lead to a better final result, though that’s not to say the opposite can’t be true as well. Our hopes are high either way as reactions to the film begin to trickle in today.

The post ‘The Green Knight’ Director David Lowery Re-edited the Entire Film During Lockdown, Didn’t Like the First Cut appeared first on /Film.

‘Slash Film: HBO is Spending ‘Game of Thrones’ Money on That ‘The Last of Us’ TV Series’