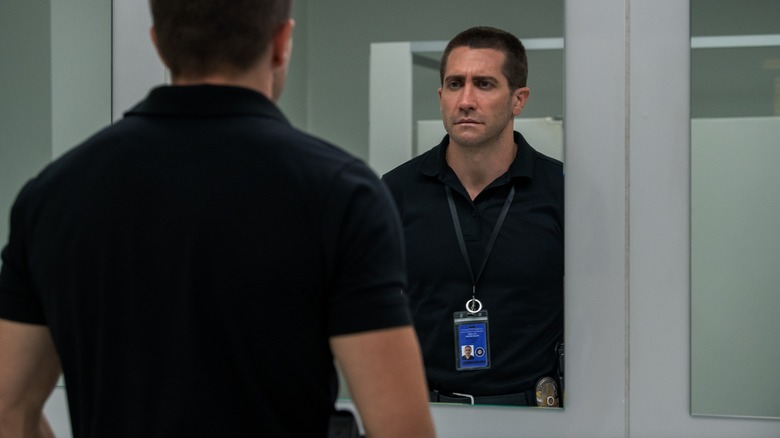 From a storytelling perspective, Antoine Fuqua’s “The Guilty” is pretty good. How could it not be? It’s following the original film that inspired it beat by beat. This “The Guilty” may not be a shot-by-shot remake akin to Gus Van Sant’s fascinating, flawed “Psycho” experiment, but it might as well be. Here, Fuqua and company are sticking close to the 2018 Danish film, and if you’ve seen that movie, you’ve more or less seen this one, too. With that in mind, the new “Guilty” cranks out tense, claustrophobic scenes in the same fashion. But what we have here is also something with the slick sheen of Hollywood all over it. It’s willing to go to the same dark places as the Danish film, but it doesn’t want to hang out in those places very long.

With the story now transported to California, we open with that scourge of The Golden State, the out-of-control wildfire. It’s burning big and bright and terrible, and Fuqua gives us an establishing shot of red hot flames in the hills above skyscrapers, a shot that looks like a riff on Mount Doom from “The Lord of the Rings.” A big fire means big emergencies, and Joe Bayler (Jake Gyllenhaal) is the man fielding the calls for help. He’s working in a 9-1-1 call center, and it’s clear from the jump he doesn’t want to be there. Gyllenhaal plays Joe as a man who is coming unhinged before we even lay eyes on him. He’s sweaty, then he’s cold. He’s screaming, then he’s trying to have a polite conversation. He clutches his asthma inhaler in a tight fist as if he were holding on to a talisman to ward off evil. When he gets a 9-1-1 call from someone who seems to be having a bad reaction to drugs, he bluntly tells the frantic, frightened caller, “Well, it’s your own fault, isn’t it?”

If there’s a draw here, it’s Gyllenhaal’s performance. At this point, Gyllenhaal has established himself as a fascinating actor, especially when he gets to go weird. He doesn’t enter that weird zone here, but he does bring a level of physicality and intensity that keeps your eyes glued to the screen. Even though the actor spends a large chunk of “The Guilty” sitting at a desk, he’s constantly moving, his muscles tensing, his eyes darting around. He’s like a kid who can’t sit still in class. It also helps that his character is commendably gray; he’s neither portrayed as all good or all bad. The best description for him would probably be “human disaster,” as he struggles to both do the right thing while also doing everything wrong.

Joe isn’t a 9-1-1 operator by trade. He’s a street cop who has been benched due to an incident. “The Guilty” keeps what that incident is intentionally vague, but it’s clear that Joe screwed up, and tomorrow he has to head to court to defend himself. Reporters call him to get his story. His sergeant (the voice of Ethan Hawke — nearly the entire listed cast only “appears” here via voice performances) tells him he needs to go home and calm down. His estranged wife finds talking to him to be a chore. And his partner is out late, drinking and driving, because he, too, has to head to court — and lie to back up his partner. It’s as if everything Joe touches crumbles to dust. And then that dust gets flushed down a toilet.

The night takes a turn when Joe gets a call from a weeping woman named Emily (voiced by Riley Keough). She doesn’t seem to be directly responding to Joe’s questions, and he pretty quickly intuits that Emily has been abducted. She’s in a moving vehicle with someone, and she doesn’t want that someone to know she’s on a 9-1-1 call. An emergency operator’s job usually ends when they hand the info from their call off to the respective respondent, be it cops, EMTs, or firefighters. But Joe is too invested to let that happen. Even after alerting other cops of the situation, he remains invested in what’ going on, intent to find out who has taken Emily and where she’s going. So much so that he begins his own investigation right from his call desk.

Gyllenhaal Is Great, But That’s Not Enough 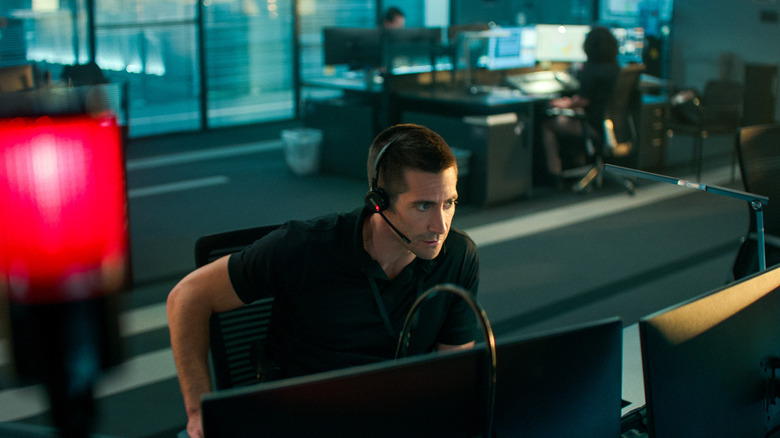 We should not immediately shrug off American remakes of foreign language films; it’s nice to give every movie a chance. But “The Guilty” is so stuck on recreating the big tense beats from the original that it’s very hard to watch this sort of thing and not think, “I’d rather be watching the original.” Further adding to that is the fact that Fuqua never seems entirely comfortable with the one-location setting. He’s an action filmmaker, and he will occasionally cut away from the call center to show blurry shots of cars on highways. These diversions add almost nothing, and instead completely break up the flow. Gyllenhaal is such an adept performer, why cut away from him to show a car’s taillights, when Gyllenhaal’s panicked face and wide eyes convey much more?

Then there’s the American film’s inability to go to the depths of the original. To say more would give away spoilers, but I was reminded of Robert Altman’s “The Player.” At the start of that film, a studio exec is pitched a drama about a woman who is sentenced to death despite being innocent. Per the pitch, the condemned woman’s lover spends the entire movie trying to clear her name. When he finally has the proof that can free her, he rushes to the prison — only to find he’s too late. The innocent woman has died in the gas chamber. By the end of “The Player,” the pitched movie is made and we get to see the ending. Instead of the bleak ending where the innocent woman (played by Julia Roberts) dies, her lover (played by Bruce Willis) busts into the gas chamber and saves her, carrying her out and explaining he was late because traffic was “a bitch.” This complete change from sad-to-happy ending is meant to show how crass and cheap Hollywood can be; how it’s more interested in easily-digestible crowd-pleasers than anything that would dare make an audience uncomfortable. It was a funny joke in a film from 1992, and now, here in 2021, “The Guilty” has basically done it for real.

But even if you want to completely separate this “The Guilty” from its inspiration, things border on bland. As frantic as Gyllenhaal is, as immense as his performance may be, it’s no match for Nic Pizzolatto’s script, which takes way too many shortcuts to get where it needs to go. And the film’s choice to have recognizable actors lend themselves to the voices Gyllenhaal hears — actors like Bill Burr, Paul Dano, Peter Sarsgaard, and more — tends to distract rather than engross. Jake Gyllenhaal is a wonderful actor, and while he spends nearly this entire movie on the phone, he’s never phoning it in. As a showcase for Gyllenhaal’s talents, “The Guilty” is passable, but that’s just not enough.

Read this next: The Guilty Trailer: 911 Operator Jake Gyllenhaal Is Ready To Take Your Call

The post The Guilty Review: Jake Gyllenhaal is Terrific in an Otherwise Lackluster Remake [TIFF 2021] appeared first on /Film.